“Our research is something like lighting a candle in darkness.” 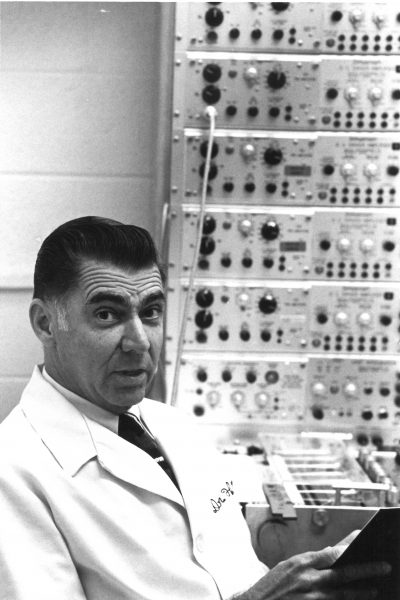 Henry Eugene King, professor emeritus of psychology at Washington and Lee University, died on Oct. 31, at his home in Lexington, Virginia. He was 94. He taught at W&L from 1977 until his retirement in 1990.

“Washington and Lee was fortunate to have had someone of Gene King’s expertise and dedication on our faculty,” said President Kenneth P. Ruscio. “By combining teaching with an impressive devotion to his research, he served as a fine role model to our students.”

At W&L, King taught courses on abnormal psychology, human neuropsychology, and medical ethics. At the same time, he served as an adjunct professor at the University of Pittsburgh School of Medicine, where he and two of that institution’s researchers studied the behavioral consequences of hypertension. In the summer, he managed the workload by living in Pittsburgh; during the academic year, he drove to Pittsburgh on Thursdays after his W&L classes ended, worked there on Friday and Saturday, and returned to Lexington on Sunday.

During World War II, he served in the Navy as an officer: on convoy duty in the North Atlantic, commanding a tank landing ship during D-Day, and in the Pacific Theater during the occupation of Japan and the repatriation of Japanese soldiers. He received several decorations for his service.

Before coming to W&L, King served on the faculty of the Columbia University College of Physicians and Surgeons (1946–1949); the Tulane University Medical School (1949–1960); and the University of Pittsburgh School of Medicine (1960–1977), where he also served as chief of the psychology service at Western Psychiatric Institute and Clinic (1960–1973), head of the psychobiology laboratory (1973–1977), and director of the program in research consultation (1973–1977).

Among his many publications were the books “Psychomotor Aspects of Mental Disease” (author, 1954), “Studies in Schizophrenia” (contributor, 1954) and “Studies in Topectomy” (contributor, 1956). He published more than 100 chapters and articles on such topics as the relation of brain to behavior and human memory disorders. King continued his research long after retirement, and recently finished a book that will be published posthumously.

King belonged to 10 scientific societies, including the American Association for the Advancement of Science and the Society for Neuroscience. Among his professional responsibilities, he served as translator/abstractor for the American Psychological Association for the Annales Médico-Psychologiques (France), and as a consultant to the National Heart, Lung, and Blood Institute and to the National Institute of Mental Health.

At W&L, his students and colleagues enjoyed his appreciation of French wine, Cajun music, Creole cooking and his mo-ped.

His wife of 60 years, Kathleen M. King, preceded him in death. He is survived by his daughter, Anne H. King, of St. Paul, Minnesota; his son, Peter O. King, and his wife, Anna Greco, of Toronto, Canada; his granddaughter Angela King and her husband, Doug Kremm, of Boston; his granddaughter Julia King of Montréal, Canada; his nieces, Lucy McGee and Martha Mason, and his nephew, John B. King III, and their families; and many cousins and other relatives.

A memorial gathering will be held at a future date.