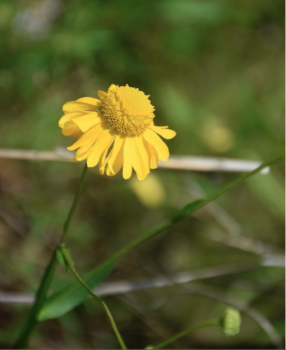 The Virginia Department of Agriculture and the U.S. Fish and Wildlife Service recently awarded $15,000 to John Knox, professor emeritus of biology at Washington and Lee University, Maryanne Simurda, professor of biology, and Skip Williams, a research partner, to conduct further studies on the origins and biogeography of Helenium virginicum (Virginia sneezeweed). The endangered plant is found in certain sinkhole ponds in Virginia, Missouri, and, most recently, Indiana.

First discovered as a new species in 1936, Helenium virginicum became Knox’s life work when he began to research it in 1976. Knox helped to establish the distribution of the plant and provided some explanations for its rarity. The plant is now protected by the state of Virginia and the federal government’s Endangered Species Act.

Before 2018, the plant was known to exist only in Virginia and Missouri. However, in August 2018, a small population suspected of being Helenium virginicum was discovered in a restored wetland at Ritchey Woods Nature Preserve in Fishers, Indiana. The grant funds will support further research to determine whether the Helenium virginicum population in Indiana is native or a recent introduction through the process of wetland restoration. This summer, Knox will travel to Indiana to take further samples of the plant.

The grant also funds collaboration with molecular biologist Simurda, who is sequencing ITS regions of the nuclear DNA to determine the evolutionary history of the plant in relation to its closest relatives.