W&L to Host Free Movie Screening in Preparation for Conference The screening, which is free and open to the public, will advance the Lexington conference of the South Sudanese Diaspora Network for Reconciliation and Peace (SSDNRP). 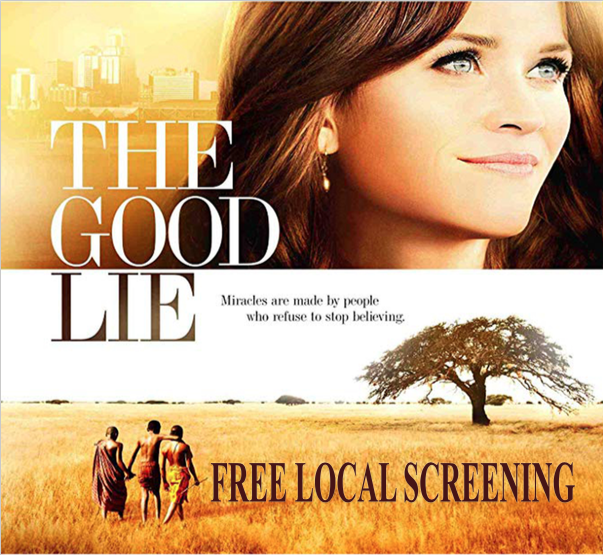 “The Good Lie,” starring Reese Witherspoon, Ger Duany and other South Sudanese actors, tells the story of one group of the “Lost Boys,” Sudanese refugees who were settled in Kansas City, Missouri.

Washington and Lee University will present a one-time screening of the movie “The Good Lie” on Aug. 16, at 6:30 p.m. in Stackhouse Theater on the W&L campus. The screening, which is free and open to the public, will advance the Lexington conference of the South Sudanese Diaspora Network for Reconciliation and Peace (SSDNRP).

The movie, starring Reese Witherspoon, Ger Duany and other South Sudanese actors, tells the story of one group of the “Lost Boys,” Sudanese refugees who were settled in Kansas City, Missouri, by an initially clueless helper played by Witherspoon.

After the showing, the Rev. Richard J. Jones, emeritus professor at Virginia Theological Seminary, will describe the Labor Day weekend SSDNRP conference and moderate a discussion.

Jones, the founding president of the Episcopal Church’s network of support for the Church in the two Sudans, is secretary of the newly formed South Sudanese diaspora group. The seven organizers of “Uniting the Diaspora for Peace” are religious and tribal leaders among the tens of thousands of South Sudanese refugees throughout North America. They will be hosted by Lexington Presbyterian and Grace Episcopal churches for this first conference of SSDNRP, which takes place Aug. 30-Sept. 1.

“We look forward this Labor Day weekend to making music, putting on a play by a Sudanese author, celebrating evidences of solidarity among North American diaspora communities, and enjoying food prepared by the Sudanese community of Roanoke,” Jones said.

“We believe we have invited leaders who will also help us develop our capacity to deal with truth,” he added. Among the conferees are Jacqueline Wilson, an associate of the U.S. Institute of Peace, and retired U.S. ambassador Dane F. Smith Jr.

Thirty-five years of civil war in Sudan, formerly the largest nation in Africa, killed or displaced more than a million children and adults. After a U.S.-brokered ceasefire and a popular vote that split off the newest nation on earth, South Sudan, tribal fighting dashed initial hopes for peace there.

Differences among some 64 tribes and languages, primarily Dinka and Nuer, fed the continued violence in South Sudan. But among the North American diaspora, common bonds of faith and close ties with the homeland have led to a series of peace-building meetings that eventually led to this conference in Lexington. Conferees will stay in the homes of church members in the area.

“The Good Lie,” which premiered at the Toronto Film Festival in 2014, was directed by French Canadian Philippe Falardeau and produced by Ron Howard. Reviewers praised its sensitive, fictionalized portrayal of young men from South Sudan made orphans by civil war.

W&L’s Africana Studies Program and Department of Journalism and Mass Communications welcome the public and members of the academic communities to the screening and discussion.