W&L to Host Talk with ‘One of the World’s Principal Observers of Democracy’ In his talk, which is free and open to the public, Mounk will discuss the rise of populism around the world. 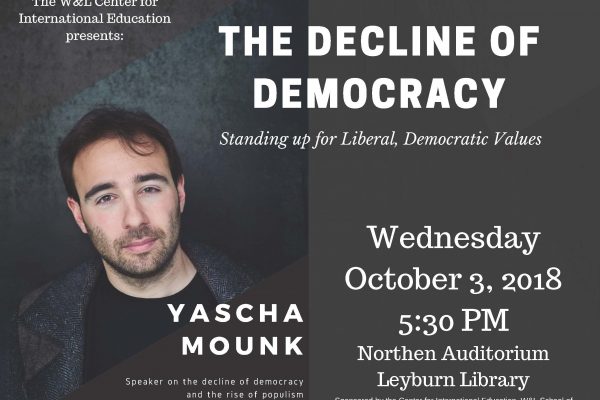 Yascha Mounk is an author and lecturer at Harvard University.

Yascha Mounk, an author and lecturer at Harvard University, will give a public lecture at Washington and Lee University on Oct. 3 at 5:30 p.m. in Northen Auditorium.

In his talk, which is free and open to the public, Mounk will discuss the rise of populism around the world.

“Yascha Mounk has been on the cutting edge of the study of democracy around the world,” said Mark Rush, Waxberg Professor of Politics and Law. “Through his analysis of the World Values Survey, he anticipated the rise of populism on the left and the right as well as the shifting sands of democratization in Eastern Europe.”

Mounk received his B.A. in history from Trinity College, Cambridge University and his Ph.D. in government from Harvard University. In addition to lecturing at Harvard, Mounk is also a senior fellow in the political reform program at New America and executive director at the Tony Blair Institute for Global Change.

His publications include three books: “Stranger in My Own Country: A Jewish Family in Modern Germany;” “The Age of Responsibility: Luck, Choice and the Welfare State;” and “The People versus Democracy: Why Our Freedom Is in Danger and How to Save It.”

“His current book, ‘The People versus Democracy,’ offers tremendous insights into the sources and consequences of the challenges to liberal democracy that have arisen across countries and continents,” said Rush. “His visit to Washington and Lee will be a wonderful opportunity for the campus and community to interact with one of the world’s principal observers of democracy.”

Mounks talk is sponsored by the Center for International Education, W&L School of Law, the Sociology and Anthropology, the Department of Politics and the Mosbacher Fund for International Lecturers and Visitors.