W&L’s Mock Convention Predicts Sanders Will Win Democratic Nomination The prediction is the result of years of research conducted by student state and territory chairs, regional chairs and national and democratic party analysts. 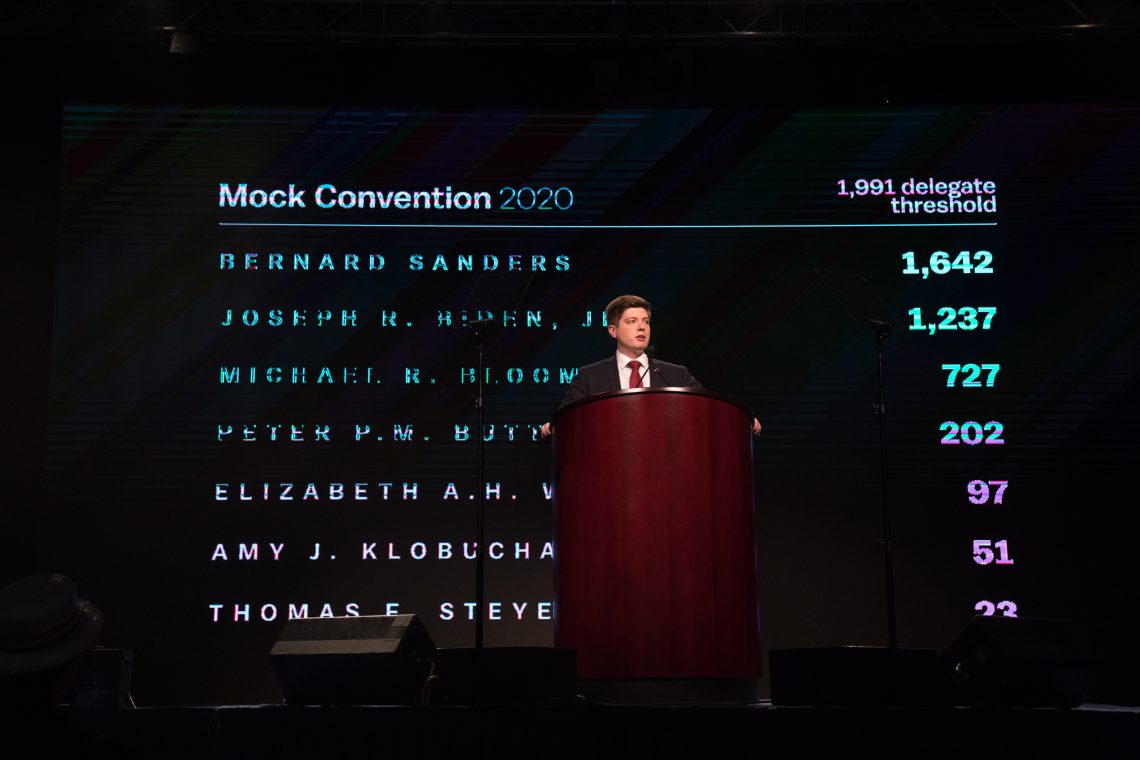 The 2020 Washington and Lee University Mock Convention came to a close on Saturday, Feb. 15, predicting that Sen. Bernie Sanders will win the 2020 Democratic Presidential nomination. The prediction is the result of years of research conducted by student state and territory chairs, regional chairs and national and democratic party analysts.

After a lively roll call, during which each delegation indicated the allocation of its votes, no single candidate received the required 1,991 pledged delegates needed to secure the nomination on the first ballot, making this the first W&L Mock Convention to predict a contested convention. After following the Democratic Party’s process for casting a second round of balloting, student leaders announced Sanders as the nominee.

A representative of Sanders’ campaign accepted the nomination on his behalf via telephone shortly after the prediction was announced.

The students’ track record of accuracy — they have been correct in their predictions 20 times out of 26 — is a reflection of their organized and thorough research efforts. State and territory delegations are charged with conducting extensive research to predict the eventual nomination of a candidate. The delegations work in conjunction with national and regional specialists using the most up-to-date poll numbers and political analyses. Students work closely with some of the most influential political operatives in every state to get the most accurate information possible.

Along with the prediction, Mock Convention attempts to create the most realistic convention atmosphere possible. The students followed the Democratic Party’s rules for its upcoming national convention in Milwaukee, Wisconsin, and created a meticulously researched simulated platform that predicts what the students think the Democratic Party will focus on during the presidential campaign.

Mock Convention kicked off in Lexington on Thursday evening, Feb. 14, with a politics and media panel bringing together leaders in the field of political media, journalism and communications to discuss what it means to be a media consumer in the modern era. Panelists included Jim Acosta, CNN’s chief White House correspondent; Tara McGowan, founder and CEO of ACRONYM; Errin Haines, editor-at-large at The 19th, a nonprofit newsroom covering politics and women; Mike Allen, co-founder and executive editor of Axios and a 1986 graduate of W&L; and Bill Roberts, senior producer for Al Jazeera and 1983 graduate of W&L.

Students participated in the Delegates’ Parade through downtown Lexington on Friday morning before the convention was called to order.

On Saturday morning, session three was kicked off by Donna Brazile, veteran political strategist and former interim chair of the Democratic National Committee, followed by Cameron Kasky, Parkland survivor, co-founder of March for Our Lives and a leading voice on gun control. The morning session wrapped up with a conversation with Trevor Noah, award-winning comedian and host of Comedy Central’s “The Daily Show.”

Mock Convention’s student researchers worked diligently for the past four years to uphold the organization’s legacy of accuracy through a three-pronged approach: in-depth analysis of national trends, on-the-ground research in all 57 convention delegations and meta-data aggregation. The mission of Mock Convention is to not only predict the correct nominee, but also to educate the public on the American political process and provide an outlet for student political engagement.