For college professors accustomed to standing at the front of a classroom, Washington and Lee University’s new Versatile Learning Classroom is a major departure.

“Traditional classrooms are arranged with the teacher at the front, who is supposed to be the sage, disseminating knowledge,” said W&L biology professor Helen I’Anson. “But that’s not the way science works anymore.”

Nor is it the way foreign-language instruction works, according to Paul Youngman, associate professor of German.

“A language classroom moves fast. We do a lot of partner work. I want to be in the middle of things, listening and interacting,” he said.

I’Anson and Youngman are two of the four W&L faculty who are finding themselves in the middle of things this semester as they test an experimental classroom in Leyburn Library. Professors Sarah Blythe, in biology, and Denny Garvis, in business administration, are also teaching in the new space.

As they find how the new arrangement works for them and their classes, the quartet is providing feedback to Julie Knudson and Flash Floyd, the members of the Academic Technology team who put the classroom together.

“This semester is a test drive,” Knudson said. “We want to see what works and what doesn’t. As new classroom space is considered for both new and rehabilitated facilities like the Integrative and Quantitative (IQ) Center or the Center for Global Learning, we will take what we learn here and incorporate the best ideas into those new classroom spaces.”

W&L’s Versatile Learning Classroom incorporates elements of the Steelcase LearnLab environment, developed by the office furniture company in an effort to support “frequent collaboration and communication, easy transfer of information between individuals and groups, the effective display of content and the need for teams to constantly reconfigure and switch between different ways of working.”

Although the W&L classroom was retrofitted into existing space in the library it adheres to the philosphy of the LearnLab, and one of the main differences between a traditional classroom and the LearnLab configuration is that there is no front or back of the room. Four tables are located on the perimeter of the room. The professor has a podium on wheels, allowing him or her to move around.

“This allows a lot of flexibility for a professor who can very quickly and seamlessly switch from lecture mode to working with smaller student groups,” said Knudson.

Each table seats six students and has a large computer display on the wall at one end. A large monitor sits at what would have been considered the front of the room, along with a large whiteboard.

Each table has power and four computer connections, which allow students to plug in laptops and tablets. Using a Bluetooth keyboard and mouse on the mobile podium, the professor can project information onto the single display or on all four displays, and can also project what is appearing on a student’s computer onto those displays.

“The most common scenario will be that the instructor might lecture for 20 minutes, then give an assignment to the students in their groups,” said Floyd. “Now, all the students in the group might be using their individual computers, and they have the ability to have their own computer show up on the group display, and the instructor might choose one of those to go to the main display for everyone to see. There are lots of possibilities.”

Another feature, much less high-tech but equally valuable, is a series of “huddle boards” — small, lightweight whiteboards — that students can remove from a rack and take to their tables, to share information with the group and then with the entire class.

Blythe is teaching vertebrate endocrinology in the new classroom. She says the environment has changed the way she prepares for class, and she warned the students on the first day that they were going to be doing far more interactive activities and explaining the material to one another.

One of those activities involved having the students make Claymation movies using iPads and Playdough to demonstrate the way cells talk to each other through specific receptors.

“I find the best way to understand this process is to watch it move,” said Blythe. “Groups of three students created their own movies with a storyboard and a script. Not only did the technology play a pivotal role since they could share the work on the screens, but they mapped out the movies on the huddle boards.”

The space, adds Blythe, has forced her to ask how she can actively engage the students instead of having them sitting in their seats as passive learners. When there is a lectern at the front of the room, she said, “you feel like you’re obligated to lecture.”

Youngman, a 1987 graduate of W&L who is in his first year on the faculty, has two sections of intermediate German using the classroom. He was intrigued about the possibilities when the Academic Technologies group previewed the classroom for faculty in the late summer.

Both the displays and huddle boards prevent students from hiding behind their books, says Youngman.

“The classroom snaps and pops,” he said. “There are so many screens that there is no way students can avoid seeing what we’re doing. There are a lot of little features, too. The huddle boards are perfect for partner work in a language classroom. I gave each group a different political party to look up on the web one day. With one push of the button, I could share with everybody what the different groups found.”

For Garvis, the course on strategic management he is teaching in the Versatile Classroom is a discussion-type class in which students analyze business cases. Although he says he is still learning what he likes and doesn’t like about the setting, Garvis believes that space “increases the ‘student-to-student’ learning that can occur.”

In her Fundamentals of Biology course, I’Anson has used the jigsaw technique with each group. She gives them a series of questions about something they’ve read. They work on the questions together, then one member of each group moves to a different table and provides that group with the information.

“At first I was thinking, ‘They’re doing my teaching for me,’ but it actually works well,” she said. “A lot of data says they learn better from each other. When they move into new groups, I can walk around and listen to discussion and correct any misconceptions.

“One problem this classroom addresses is that when we are working with a class of 20 students, as we are in the fundamentals courses, we try to do more than stand and lecture. We want to start at the very get-go to show science as an interactive process. Trying to get them to work in groups and learning in groups is hard when they are in fixed rows in the traditional classroom. Somebody gets left out.”

“I expect the one difference will be that we’ll have round rather than square tables,” she said. “Students in groups of three seem to be the magic number.  They’ll likely be working at large, nine-person round tables in the IQ Learning Center”

Throughout the current semester, W&L’s Academic Technologies team is assessing the progress and offering sessions for faculty to learn about the space.

According to David Saacke, W&L’s chief technology officer, the non-technological tools, from the tables and chairs to the huddle boards, are as important to faculty as the ready availability of the technology.

Concluded Saacke: “For us, this is a beta version of how classrooms should and could be.” 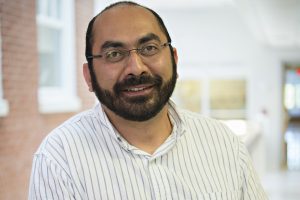 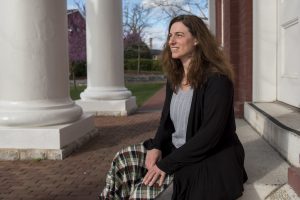