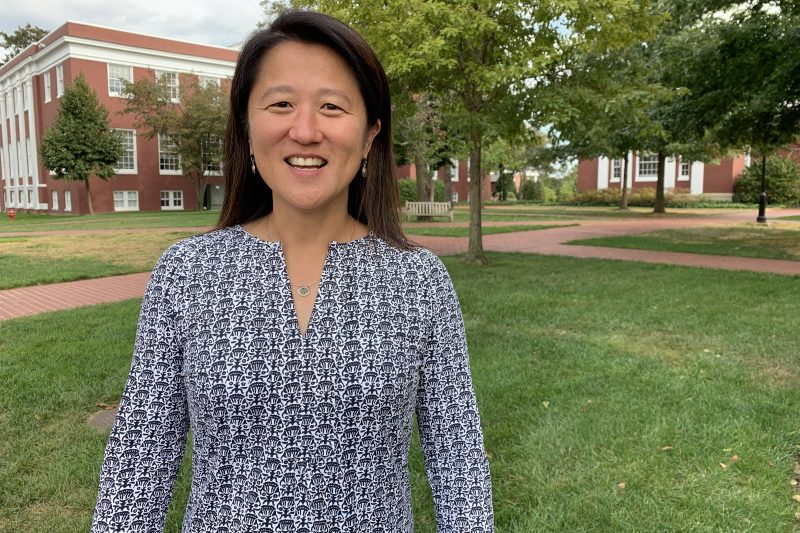 Cory Allison ’94 may have an undergraduate degree in psychology, but she’s focused her career on running start-ups.

Allison, who has several start-ups under her belt, said that she can’t imagine ever not being an entrepreneur. Most recently, she’s taken on KelCor, a medical device company seeking to “change the standard of care of anesthesiology” by providing a single-use method for securing short-term airway devices, which help patients breathe safely while in surgery. Allison runs the completely bootstrapped L.L.C. alongside her business partner and anesthesiology nurse, Kelly Good.

She’s one of the founding general partners of The JumpFund, which invests in women-led businesses in the Southeast.

We sat down with Allison, who lives and works in Chattanooga, Tennessee, at W&L’s Entrepreneurship Summit to discuss her current ventures, her advice for budding entrepreneurs and the importance of supporting women-led businesses.

What’s your role with KelCor?
My co-founder, Kelly Good, and I do this on our own, without any employees. That means we pretty much work on everything — from operations to regulatory issues — we’re using our collective skillsets to make this happen.

Why did the two of you decide to bootstrap your company instead of pursuing investors?
I raised several million dollars to run my last startup, which was a software development company. Learning the ropes of fundraising was great, but the failure was really, really hard because it’s so public. You’re not only just looking for customers and trying to satisfy them, but you have your employees that you’re responsible for, as well as investors. There are a lot of different interest groups you are trying to satisfy, as well as serve. And when you take money from someone, you have to take that very seriously — it’s even more important than using your own.

I believe as an entrepreneur and as a venture capitalist that if there is a way to make the project work without taking outside funding it’s the better route. The financial payoff will not only be worth it, but it’s who you serve. You do have a different responsibility when you take somebody else’s money because they’re investing in you to get a return. So, that could change the vision and the mission of where you started. It shouldn’t, because you should be aligning yourself with the right investors, but at the same time it’s not you anymore — you’re not making the decisions on your own.

Tell us a little bit about your work with The JumpFund.
I was one of the first six original general partners to start The JumpFund, and we raised $2.5 million, which is nothing compared to what other funds start out with. But it was all from local women in Chattanooga. That’s what really set us apart. There have been groups of funds or investors that gathered their capital and invested in women-led companies, but no group investor was just women. We were the first group of women to raise money to invest in women.

Our group created a second fund a few years later and raised $5-plus million, bringing our total to about $7.5 million. We have approximately 20 portfolio companies, and we’re in all different sectors because we felt that women were our kind of vertical and we wanted to see what they came up with. We didn’t even have to go out there to look for deals. Women just heard about us and came knocking.

Why do you think it’s important to have a fund like this dedicated to just women?
Because the playing field has not been very fair. We’re seeing change, but it’s very slow.

Everybody’s asking, “How do we create more entrepreneurs?” Well, you have to have capital to help them grow. So then, how do we get more capital? Well, get the women who are philanthropy-driven to put a little bit of that toward a fund, allow us to invest in other women and then hopefully get a return and start the cycle all over again.

We truly believe it is changing; slowly, but surely. And we hope to continue to do our best to make that needle move forward so that one of these days we can look back and say, “Hey, you know, we made a small dent.”

Is there anything that you learned at W&L that you think has helped you throughout your career?
I think it’s the self-confidence, truly. I feel like being a minority actually helped me because I’ve always played in the field where I was different. I don’t see that as a handicap — it actually helped me get to where I want to be by putting myself out there and not thinking in terms of “I don’t belong here.” I just embraced it and loved it and didn’t think anything of it.

My approach was to just go do it. It’s when you don’t try that you’re failing.