A World of Difference The Cape Town Program, a partnership between the Williams School and the Shepherd Program, provides students with an interdisciplinary experience they'll never forget. 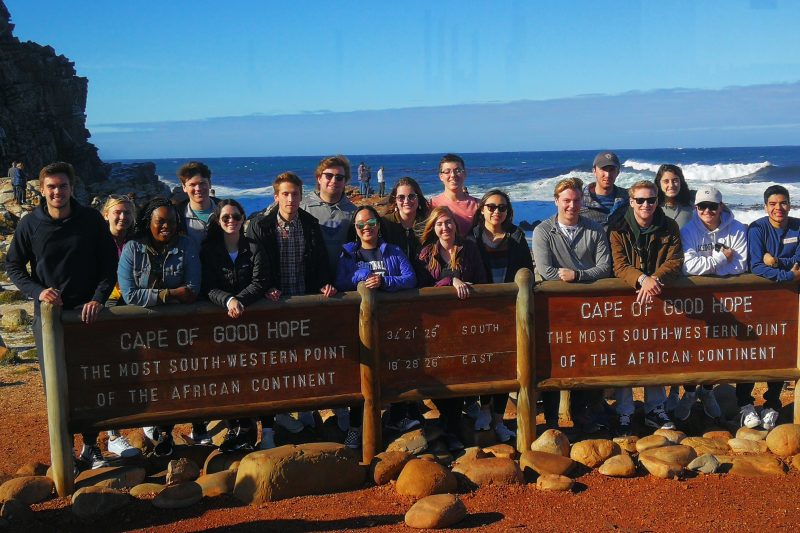 Students in the Cape Town Program pause for a photo at the Cape of Good Hope. Photo Courtesy Connect 123.

“Coming to South Africa has given me a new perspective on what I have learned at W&L and helped me to apply my knowledge to practice.”

The Cape Town Summer Internship Program, established in 2016 as a partnership between the Williams School and the Shepherd Poverty Studies Program at Washington and Lee University, provides an opportunity for students from all backgrounds to apply a broad array of skills in a meaningful way.

This year, participating students were majors in politics, economics, biology, accounting, history, computer science and more. Their internships also varied greatly. Isaiah Medina ’22 worked with an organization whose goal is to reverse the decline of the South African sea bird population. In contrast, Hyer Thomas ’21 did mathematics and accounting work for a youth development agency.

“Cape Town represents an especially unique and new setting in which to consider topics such as governmental change, race and inequality, as well as the effects of urban architecture,” said Program Director and Professor Denny Garvis. “We make specific efforts to inform students that the program is open to all Washington and Lee majors and that it provides an opportunity for those who may not be able to study abroad during the regular academic year.”

Hellen Li ’21, a Global Politics and Sociology and Anthropology double major who is also a scholar in the Bonner Program, a Shepherd service initiative, was one of 17 students who participated in the Cape Town program this summer.

“Coming to South Africa has given me a new perspective on what I have learned at W&L and helped me to apply my knowledge to practice,” Li said.

She and Alex Woodward ’21 both worked with nonprofits focused on stopping prostitution and human trafficking in South Africa. Li’s organization is called Embrace Dignity, while Woodward worked for a nonprofit called Vheneka. According to Vheneka’s data, there are more than 167,000 prostituted people in South Africa.

“Embrace Dignity advocates for the dignity of women by increasing their options for exit and providing an environment of support,” Li said. “This is achieved through the advocacy for partial decriminalization – or the Equality Model – wherein the sellers are decriminalized and the buyers and third parties are criminalized.”

Woodward, a Global Politics and Religion double major who is minoring in Poverty Studies, said she also performed a wide range of tasks. “I have done grant research, data/information collection, basic financial help, web design, photography, marketing/social media, and more. It has really been quite an interesting experience,” she said.

“Vheneka’s mission is to restore, affirm, and illuminate women who are survivors of prostitution, she added. “Their approach attempts to cover aspects of exiting prostitution that are often neglected by legal advocacy efforts.”

Woodward and Li both said that their South African internships gave them the opportunity to apply lessons they learned in the classroom. Fran Elrod, Associate Director of the Shepherd Program said “one of our goals is to give students real-world knowledge so that they can apply it, and then bring back questions that have arisen through experiences abroad and outside of the local community.”

Elrod said the Shepherd Program for the Interdisciplinary Study of Poverty and Human Capability is intentionally a minor, and it serves to “deepen and strengthen students’ understanding of issues that affect society, from whatever major perspective they come from.”

Woodward agreed: “The Shepherd Program allows me to take my politics major and look more at policy and ethics in an applicable manner. Additionally, I think the Williams School has done a good job of integrating poverty issues into their curriculum.”

Taylor Thiessen ’21, a Bonner Scholar double majoring in Politics and Philosophy with a minor in Poverty Studies, also participated in the Cape Town Program this summer. He worked with a high school enrichment program called Ikamva Youth. The program has branches in townships across South Africa, and it helps students experiencing poverty by providing tutoring and other forms of support. According to its data, half of South African students don’t make it past the 12th grade.

“The branch I work at is in Nyanga, which is the most dangerous of the townships in Cape Town,” said Thiessen. “Providing information and support to the students here is so helpful for them to be able to do well academically and pursue better opportunities.”

Thiessen said that his duties also varied a lot based on what the program had going on. He helped students review major concepts during breaks, helped run a resume and cover letter writing workshop, and helped students prepare for the South African National Spelling Bee.

Thiessen specifically credits Professor Stuart Gray’s Contemporary Political Philosophy course and Professor Howard Pickett’s Poverty, Oppression, and Privilege course for helping prepare him for this internship. “These ideas have done so much to frame what I am doing here this summer and also to help me understand things that are going on here,” he said.

“I think it’s really easy to tailor the study of poverty and human capability to different interest areas and explore it from the context of different issues,” said Thiessen. “An interdisciplinary study allows you to do that.”