Adventures in Arabic Four Washington and Lee University students are spending time this summer in Beirut, where they are immersed in Arabic language and Lebanese culture. 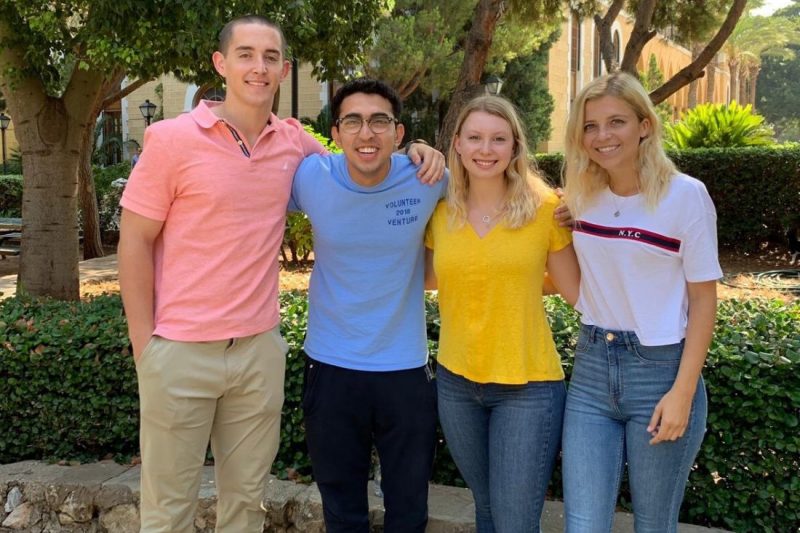 Tanner Hall ’21, Syed Rafay Hassan ’22, Anne Riter ’22 and Lauren Fredericks ’20 are spending time this summer in Beirut, where they are studying and practicing their Arabic.

“I’ve never been to the Middle East before, and I feel like Beirut has been a great introduction for me. The culture is unlike anything I’m familiar with, and I’ve loved getting to know every facet of Lebanese life while I learn Arabic.”

Four Washington and Lee University students are spending this summer in Beirut, Lebanon, where they are studying Arabic language and culture at the American University of Beirut. It is the largest group of W&L students to participate in the program since the inception of the university’s minor in Middle East and South Asia Studies (MESA) in 2017.

Middle East and South Asia Studies is an interdisciplinary program of study focused on the Middle East (including Arabic-speaking North Africa) and South Asia (including Tibet, and mainland and insular Southeast Asia as far east as Vietnam and Indonesia). Students of MESA are invited to apply for study-abroad programs in Egypt, Jordan, Lebanon, Morocco and the United Arab Emirates.

The American University of Beirut summer program is hosted by the Center for Arab and Middle Eastern Studies (CAMES), and allows students from around the world to immerse themselves in intense language study while also absorbing the culture of Lebanon.

We checked in with W&L students in Beirut to find out how their summer is going so far.

Why did you decide to study Arabic at W&L and what do you hope to do with it after you graduate?

Coming into my first year of college, I was undecided about what language I wanted to study despite taking several languages in high school. I chose to study Arabic mostly because, at Admitted Students’ Day before my first year, I met Professor Antoine Edwards, who convinced me to take his first-year Arabic class. He gave a pretty convincing sales pitch, and I’ve stuck with it since then. Through my studies I’ve found that Arabic is a really rewarding language that has allowed me to travel across the world while immersing myself in the rich culture and history of the Middle East and North African regions, and I absolutely recommend studying Arabic to anyone who loves languages.

After I graduate, I’m hoping to continue my Arabic studies until I reach fluency so that I can use my Arabic in a future career. Right now, I’m leaning towards finding a job in the government in either diplomacy or intelligence, but I’m not against any career path as long as it will put my linguistic skills to use.

Q: How are your days going so far in Beirut? What is the most interesting experience you’ve had so far?

I wake up in the morning and head out to purchase milk and dates for breakfast. I know little Arabic, yet I push myself to communicate with the shopkeeper in his language. It’s what the AUB Summer Program is all about. Here, we’re not just learning Arabic; we’re breathing it. Instructors in the Center of Arabic and Middle Eastern Studies constantly keep us students on our toes. In the course of a single day, we are to write essays, read short stories, listen to songs and sustain multiple conversations (casual and intellectual), all in Arabic. The idea is simple: Unless all five senses are activated, a language simply cannot be acquired.

Two weeks haven’t passed here and already, I have a list of unforgettable memories. I have toured sites, including the Jeita Grotto, Harissa and Byblos. There’s obviously no way to compare one place with the other, but if I have to choose, I’d say that the Old City at Byblos has been my favorite spot thus far. Its “souk,” even with its modern touch, still retains that aura of a glittering ancient Arabic marketplace. Within an area of about two square miles, Byblos gives you Neolithic remains, a Roman theater, a Crusader church and fort, and a mosque from Mamluk times. Who could ask for more?

This is the thing about Lebanon: It packs a plethora of cultures and religions in a tiny amount of space. As a fan of history, I just cannot seem to get enough. I go to downtown Beirut and find the Saint George Greek Orthodox Cathedral standing right next to the Muhammad Al-Amin Mosque. I step into one and end up with hardly any time to visit the other. That’s life, I suppose, and honestly, I’m okay with it. My summer’s already been enriched!

Q: Did you experience any cultural shock when you got to Lebanon for the first time? What have been your observations about the culture there so far?

I have experienced a fair amount of culture shock since arriving in Lebanon, though not in the way you might think. I have lived in the Middle East for nearly seven months now, and I spent a significant portion of that time in the beautiful, welcoming, culturally conservative country of Oman.

The busy, flashy city of Beirut makes me feel as though I have stepped onto a different planet! I am still adjusting to seeing men and women in shorts, dealing with higher prices, and waking up to the sound of my alarm, rather than the call to prayer, for the first time since December. Though there are certainly things I miss about the Gulf, I’m greatly enjoying the excitement of modern Beirut, the mix of different cultures and traditions, and the natural beauty of rural Lebanon.

Q: What would you say to a student who is thinking about studying Arabic and traveling to Beirut during their time at W&L?

I can’t say enough good things about Estaaz Antoine [Professor Edwards] and the Arabic program at W&L. I started Arabic at the intro level⁠—I had no prior experience in learning Arabic⁠—and the energy that Estaaz Antoine brings to the classroom, and his enthusiasm for the language, makes Arabic seem manageable, because make no mistake, it’s a difficult language to learn.

My classmates also made the class worthwhile. None of them had really any background in Arabic, so we all struggled and learned together. The Arabic program does an excellent job of fostering a sense of community.

As for Beirut, it’s been challenging with the language barrier and the amount of homework I’m assigned, but it’s also fun getting to know people who are at different stages in their Arabic education. I’ve never been to the Middle East before, and I feel like Beirut has been a great introduction for me. The culture is unlike anything I’m familiar with, and I’ve loved getting to know every facet of Lebanese life while I learn Arabic.

That being said, traveling to Beirut is not for everyone, but if you’re up for the adventure and the struggles that come with being far away from home while learning a language you are unfamiliar with, then I say why not go? I’ve seen myself grow as a person and as an Arabic student while I’ve been here, and I can only hope that more students join the Arabic program!