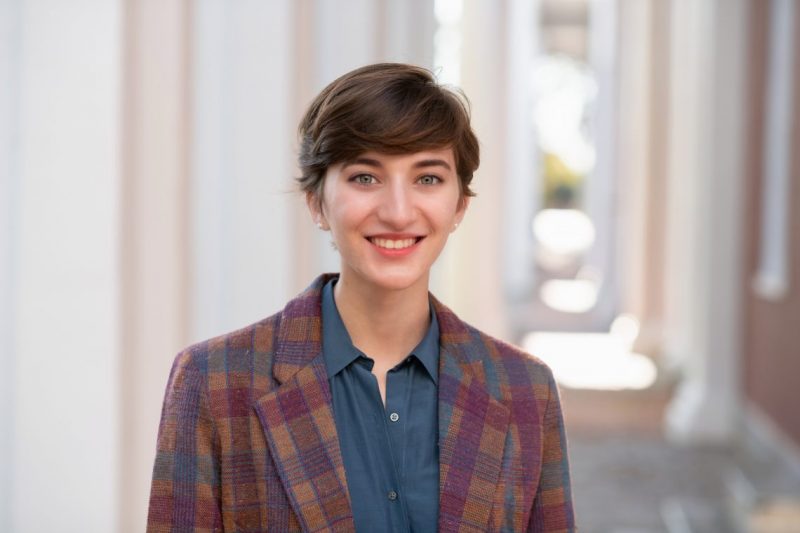 When Brooklyne Oliveira ’21 starts her M.A. in religion with a concentration in ethics at Yale Divinity School in September, she’ll have her tuition covered plus a $10,000 stipend. Oliveira earned the school’s Marquand Scholarship, a merit award given annually to scholars demonstrating academic achievement, leadership ability and commitment to scholarship or the church.

Full tuition grants and stipends are unusual for master’s degrees in religion. For Oliveira, who was accepted to several programs, receiving the Marquand helped her feel comfortable in her choice.

“Most of the programs that I looked at were like, ‘Oh, maybe there’s some funding,’” she said, “but not very many of them had full tuition scholarships or anything like that. That solidified my decision.”

Oliveira, who majored in religion at W&L and wrote her thesis on the 20th century Christian theologian Dietrich Bonhoeffer’s book “Ethics,” hopes to enter a doctoral program after her master’s, with the end goal of teaching.

Her path to graduate school began with an unexpected last-minute change in study abroad plans her junior year. Oliveira intended to spend a semester in Spain until Cindy Irby, assistant director of international study and study abroad advisor at W&L’s Center for International Education, contacted her when someone dropped out of W&L’s yearlong Blackfriars Hall Partnership Program in Oxford, United Kingdom. The program’s coursework in theology complemented Oliveira’s growing interest in religious studies, so she applied. Even though the program deadline had passed, she was accepted and spent a year studying at Blackfriars, a working priory.

“Half of my teachers were priests,” she explained, “always teaching in their robes. So it was a totally different Oxford experience, but it was really, really great. I read a lot of Bonhoeffer.”

COVID-19 curtailed her stay in Oxford, and there were no courses on Bonhoeffer available at W&L when she returned. Oliveira continued studying the theologian’s work with Howard Pickett, associate professor of ethics and poverty studies and director of the Shepherd Program for the Interdisciplinary Study of Poverty and Human Capability, and Alexandra Brown, the Fletcher Otey Thomas Professor of Religion. The two advised her on her thesis and encouraged her to aim high for graduate school.

“I talked to Professor Pickett a lot,” Oliveira said. “His field of study is Christian ethics, so he was really helpful in helping me work through my applications and my essays. And Dr. Brown was very helpful as a woman scholar and a religion scholar who is also observant.”

With their contacts in the field, the professors were able to guide her toward programs for which she would be a good fit.

“Brooklyne is, in every respect I can think of, admirable,” Brown said. “She knows no fear or timidity in tackling the core intellectual problems of her disciplines. Without doubt, she will both advance knowledge in theological studies and commit that knowledge to societal and cultural challenges whose solutions depend on wit, honesty, commitment, courage, strong preparation, and an eye for beauty. Her designation as a Marquand Scholar is a confidence well placed!”