Can Online Speech Be Regulated? Professor Claudia Haupt is the second speaker in the German Law Journal 20th anniversary series. 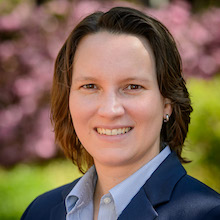 The German Law Journal will delve into the constitutional regulation of online speech by welcoming Northeastern law professor Claudia Haupt, who is an expert in the First Amendment. Haupt will speak on Wednesday, Jan. 15 at 4 p.m. in Classroom B. The event will constitute the second installment in the GLJ’s 20th Anniversary speaker series.

As a scholar, Haupt is particularly interested in how the First Amendment intersects with health law and torts in the context of professional speech.

Other university jobs that she has held include an appointment at Columbia Law School and a teaching position at George Washington University Law School.

Haupt clerked at the Regional Court of Appeals at Cologne, and practiced law at the Graf von Westphalen law firm, focusing on information technology law, before moving into academia.

She has a Ph.D. in political science from the University of Cologne, a JSD from Columbia Law School, and an LL.M. from George Washington University. She is admitted to practice in both Germany and New York.