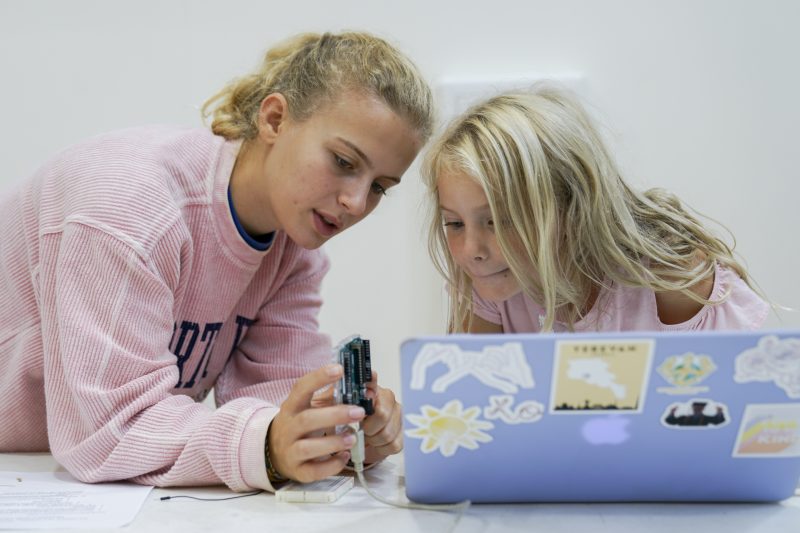 Emily Hassid ’22 teaches a local elementary school student about electrical circuits as part of an after-school program at Central Elementary in Lexington.

“I hope it helps our students appreciate the impact that they can have as engineers and scientists, especially communicating the real-world relevance of STEM in real-time.”

Studies have shown that teaching a subject to another person is an incredibly effective way of mastering that subject—even more effective than studying notes or doing homework. For students in Associate Professor Jon Erickson’s Electrical Circuits class at Washington and Lee University, that lesson came to life this semester when they were challenged to teach the principles of circuits to local third-, fourth- and fifth-graders at Central and Waddell elementary schools in Lexington.

“This experience made me learn the material to a higher degree,” said Alec Mulkern ’22. “Circuits can be a very complex topic, which means you need to be completely comfortable with the material to break it down and make it accessible to a 4th grader.”

The opportunity was made possible by a grant from the Jessie Ball duPont Fund, which was awarded to the Office of Community-Based Learning (CBL) and the Shepherd Program at W&L in 2018 to enhance and expand community engagement and service-learning in the Rockbridge County area. Erickson was one of four W&L faculty members who worked alongside community partners to redesign existing courses as a result of the grant. He collaborated with Rockbridge Area YMCA Director Bobbie Wagner to develop the course, which included six weeks of after-school programming at the two schools.

“Partnering with community organizations is vital to our after-school program,” LePere said. “In the month of October, we partnered with 16 different organizations that provided enrichment programming most days of the week in areas such as career education, karate, nutrition and leadership training.”

Once a week, students in Erickson’s 200-level course made afternoon visits to the two elementary schools, where they engaged kids in hands-on activities that demonstrated concepts in electrical circuitry. For example, one afternoon was dedicated to understanding temperature sensors, or devices that measure temperature and convert that into an electrical signal.

The W&L students taught the elementary-age kids about the use of temperature sensors in products such as electric stoves and laptop computers. Then, they built thermal warning systems and tested them with the goal of making a buzzer go off or a light turn on when the temperature reached a certain point.

On another day, Erickson’s students worked with the children to make an audio amplifier. They then let the kids pick out music to play.

One little boy said the program was fun “because we get to work with wires and play around with some of the stuff!” Another elementary school student told Erickson, “I told my dad what we were building in school, and he took me to RadioShack to buy more parts. Now we started building circuits together at home for fun.”

This was not the first time W&L has partnered with the local YMCA. Courses in Cognitive and Behavioral Science, Biology, Economics, Poverty Studies and other disciplines have engaged with their programming. Many W&L students also volunteer in various capacities. But LePere said this was the first time their after-school program became a component of an entire course at W&L.

“This has been very successful,” LePere said. “The project has given elementary students the opportunity to feel special and be challenged. It is also something new, so they find that exciting. We even had a student who usually doesn’t stay after school on Mondays, but he made a point to stay just so he could attend the workshops.”

Erickson, who has taught the circuits class nine out of his 11 years at W&L, said it was initially daunting to think about breaking down the material into something that would resonate with young children. Some of his students were nervous because they had never worked with children before and weren’t sure what to expect. “But they were wonderful,” Erickson said. “They exhibited such positivity and energy, and they immediately connected with them.”

The W&L students’ participation in the after-school program was an integral part of the course. The students reflected every week about how they prepared for the lessons, what worked and what could have been more successful. Erickson saw these reflections as opportunities to deepen his students’ investment in the program and make sure they put a lot of thought into the process of preparing the lessons for future weeks.

“I think the benefits of this opportunity are threefold,” Erickson said. “I hope that it helps reinforce, from the pedagogical standpoint, concepts we learn in class; I hope it enriches the after-school program in STEM and maybe inspires some of those students to pursue it longer term; and I hope it helps our students appreciate the impact that they can have as engineers and scientists, especially communicating the real-world relevance of STEM in real-time.” 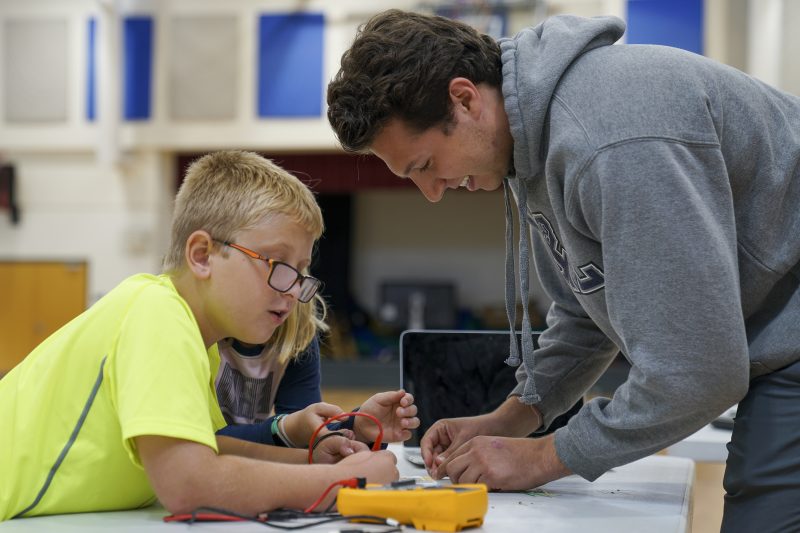