Healthcare and Community in Ecuador Jackson Roberts '19 had the opportunity to intern in Quito, Ecuador, exploring local customs, becoming part of the community, and learning the ins and outs of healthcare.

“Living and functioning in a foreign city was an exhilarating and challenging experience that has increased my confidence in my own ability to work internationally in the future.” 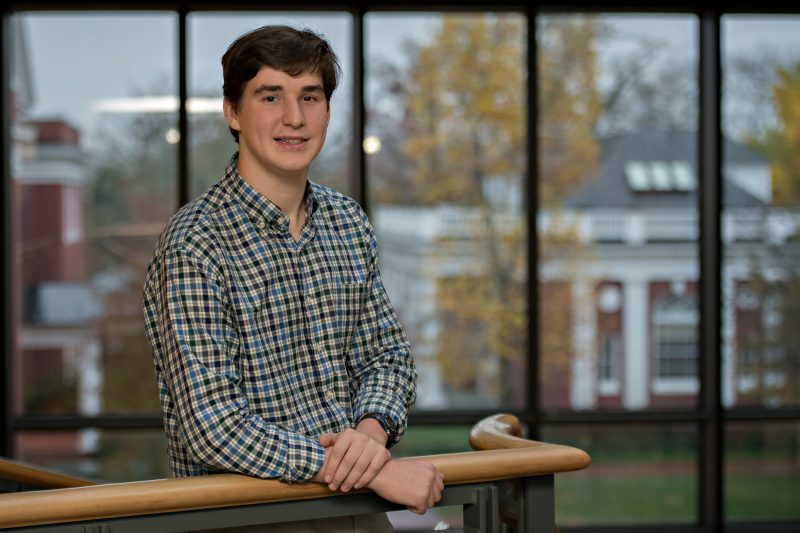 This past summer, I had the opportunity to work as a Shepherd International Intern in Poverty Studies in Quito, Ecuador. The program connected me with a host family in the city as well as a non-profit health clinic where I would work throughout the summer. One of the unique features of Quito is that it is located in a narrow valley nestled between the Andes, meaning that its population of more than two million stretches out for miles with very little width across. The result of this for me, living in the center of the city and working in the south, was a lengthy series of bus rides each morning to arrive at work at the other end of the city. I found the bus ride a fantastic way to experience the city as a local would, riding the same route tens of thousands ride each day to get to and from work. Riding the bus for a couple hours each day allowed me to really feel the pulse of the local culture and experience the city in a way a tourist never could.

At the clinic itself, my main responsibilities involved helping run a day program for geriatric patients. About 50 to 70 patients would arrive at the clinic each day, ranging in age from mid-60s to late 90s, to receive basic care and support, as well as to simply establish a sense of community centered in the clinic. Many of those who came to the clinic had been abandoned by their families or lost contact with children who had left the country to work abroad, leaving them without much of a local social network. In a country where the family unit is often highly emphasized and essential to the support of its various members, these individuals represented an instance where the social norm had broken down and left them without a safety net. My tasks there included providing companionship to the patients who visited the clinic each day, as well as supporting nurses with basic tasks such as taking vital signs and directing the patients.

Overall, a lot of my responsibilities ended up being a great deal of fun. Prior to this summer, my interactions with the elderly were often stilted and awkward, but I found myself laughing constantly and navigating conversations with ease as the summer progressed. My experience at the clinic brought a lot of unexpected surprises, including a visit from the president of Ecuador.

In addition to my work with the geriatric program, I worked some afternoons making house calls to diabetic patients who were unable to make the trip to the clinic. I also spent a week at an alternative medicine clinic outside of Quito, which provided an incredible opportunity to explore my interest in medical anthropology in a firsthand manner. Seeing how traditional medicine is adapting and persisting in an increasingly urban and globalized society was very interesting, and will continue to be an important issue in the country moving forward.

My experience as an intern in Ecuador helped to reaffirm my commitment to pursuing a career in international healthcare, whether that be as a medical doctor or public health professional. Observing and working in another healthcare system has provided a lot of insights that can be compared and contrasted with our own healthcare system in the U.S. In addition, simply living and functioning in a foreign city was an exhilarating and challenging experience that has increased my confidence in my own ability to work internationally in the future. I think these experiences are critical for W&L students as we prepare ourselves to be global citizens in an ever-changing international landscape.

A little more about Jackson

Extracurricular involvement:
I currently serve as co-president of the Red Cross Club, which coordinates blood drives and other service-oriented activities on campus. I am also a Volunteer Venture pre-orientation trip leader to Richmond, where we volunteer at different sites involving healthcare and youth. I have just begun my appointment on the Student Health Advisory Committee and served on the Science, Society, and the Arts Advisory Committee my sophomore year. In addition, I have worked in Dr. Toporikova’s research lab since my first year at W&L, investigating the overlap between a high-fat high-sugar diet and polycystic ovary development. I also presently serve as the Scholarship Chair of my fraternity.
Why did you choose your major?
For a lot of people, the combination of neuroscience and anthropology as double majors does not make a lot of sense, but it always did for me. I’ve always been interested in people, and both majors really get at the question of who we are as a species, just from different angles. In neuroscience, I found a means by which I could learn about the processes by which we feel, think and express ourselves. In anthropology, I was able to continue my passion for the study of culture and the unique life-ways of people around the world.
Best place to eat in Lexington? What do you order?
My personal favorite spot to grab a meal in Lexington is Mano Taqueria. Their particular Oaxacan-style burritos and tacos have always struck a chord with me since I spent a couple months in that region back in 2014. My order is usually a pork burrito, but I always recommend asking for whatever special they’re offering that day.
What one film/book do you recommend to everyone?
“Mountains Beyond Mountains” by Tracy Kidder
Post-graduation plans:
The eventual plan for me following graduation is to head to medical school, but I am hoping to first take a gap year and pursue either a fellowship or a year or two working in public health. In my ideal scenario, I would attend an MD/MPH program to tie together my interest in healthcare and society.
Favorite class:
My favorite class so far is certainly Medical Anthropology with Professor Markowitz. The course was the perfect union of my interest in health and culture, and provided many interesting case studies that kept me intrigued throughout the course. I think it is really important for students considering a career in the healthcare professions to take a course like this one because it broadens your perspective on what healthcare is and what forms that might take cross-culturally. Achieving cultural literacy in the different norms that impact healthcare can be a huge advantage for anyone pursuing a medical career.
Favorite W&L event:
Either Fancy Dress or pre-orientation trips
What’s something people wouldn’t guess about you?
I don’t think people would guess that I am a huge nerd for Latin American culture, particularly the history of the Incan empire. It doesn’t really shine through often in conversation, but I used to read obsessively on the topic.
Why did you choose W&L?
I have an older brother, Jake Roberts, who attended W&L before me, so in many ways I felt I knew the campus before I ever set foot on it. When I actually did make my first visit, I was blown away by the gorgeous landscapes that circled the campus and fell in love with the look of the campus itself, which emanated a strong sense of history. At the time, I was also really hoping to attend a school where my professors would see me as an individual and provide opportunities for meaningful interaction, and I certainly saw that in W&L. After that visit, I was convinced that W&L was the place for me. Now, there’s a third Roberts in his first year at W&L and a possible fourth on the way!
Related //Anthropology and Sociology, Neuroscience, Poverty Studies
Tagged //anthropology, Class of 2019, healthcare, neuroscience, public health, shepherd, shepherd international internship program
Loading Comments...