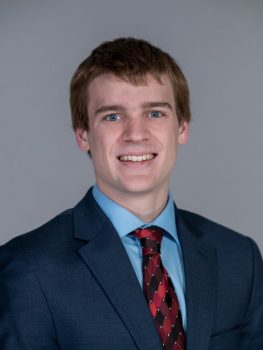 “Washington and Lee has made me more independent and confident in front of the sometimes-daunting prospect of study and work abroad, and I have learned to more fully appreciate foreign cultures and peoples.”

Jared Nickodem ’20 of Cedarburg, Wisconsin, has been selected for the U.S. Teaching Assistantship (USTA) Program with Fulbright Austria starting in late September 2020. Nickodem recently completed a double major in politics and European history, with a minor in German.

Since 1962, Fulbright Austria has partnered with the Austrian Federal Ministry of Education, Science and Research (BMBWF) to bring qualified, motivated university graduates from the United States to teach English in Austrian secondary schools.

As part of this nearly 10-month assistantship, Nickodem will be teaching at a high school and a trade school in Oberpullendorf, a small town located near the border with Hungary. There, he will help Austrian students develop their linguistic abilities and expose them to different aspects of American culture, helping to promote mutual understanding between the U.S. and Austria for future generations.

His interest in Austria was fueled in part by a memorable Spring Term abroad course there in 2018. The students stayed with host families, completed classes on language and Austrian history, and took part in numerous excursions to different historical and cultural locations.

“Not to be cliché, but it’s something of a dream come true,” said Nickodem. “I’ve spent the past two years looking forward with the intention of doing this program, and even though I arrived here after a plethora of other experiences, it feels very good to see my journey come full circle. After straying from German a little bit to study Russian and Serbian, coming back to teach English in a German-speaking country is going to be a tremendous experience. I’m really excited, and my time at W&L makes me that much more confident that the road ahead will be a good one, even if its curves are unpredictable.”

Nickodem said he was especially grateful to German professor Debra Prager for inspiring him to apply for the program.

“Jared had a transformative experience during my Spring Term course in Austria his sophomore year,” Prager said. “He listened and learned, asked good questions, and was respectful and curious about history and culture during our four weeks there. He also developed a wonderful relationship with his Austrian host family. They opened his mind to new perspectives and cultural values, and forced him to discuss politics at the dinner table in German, which he relished!”

Prager added that while in Vienna, Nickodem met with W&L alumna and former Austrian USTA Christine Luby ’13, and the experience encouraged him to apply for teaching assistantship programs and to consider a career in foreign service.

“Jared is a thoughtful person,” Prager said, “and he’s committed to gaining an understanding of different cultural values and perspectives, both abroad and here in the U.S. I’m sure he will treat the ups and downs of adjusting to living in another country as opportunities rather than burdens, and I know he will be a real asset in the classroom, helping students to learn English and about America.”

Nickodem was also offered a Fulbright English Teaching Assistantship to Serbia for the 2020-21 academic year, but ultimately decided on the USTA opportunity in Austria with the intent of perhaps applying again for a teaching assistantship in Serbia for the 2021-22 academic year. In addition to that possibility, he plans to explore careers in diplomacy and foreign service in which he will be able to apply his language skills and cultural experience.

“Washington and Lee has made me more independent and confident in front of the sometimes-daunting prospect of study and work abroad,” he said, “and I have learned to more fully appreciate foreign cultures and peoples.”