Journalism Students Win SPJ Awards In addition, stories by two students were chosen as finalists in the SPJ Mark of Excellence national competition.

In addition to winning regional SPJ awards, stories by Hannah Denham ’20 and Kinsey Grant ’17 were named as finalists in the SPJ’s Mark of Excellence national competition.

There are only three finalists in each category, including the winner, and Grant’s and Denham’s work was up against student journalists all over the country.

Four Washington and Lee journalism students won five Mark of Excellence Awards in Region 2 of the Society of Professional Journalists.

At a ceremony, April 14 in Richmond, Faith Pinho ’18, Ellen Kanzinger ’18, Hannah Denham ’20 and Kinsey Grant ’17 were recognized for stories they reported and wrote and photographs they took during 2017.

Their work was produced for the Ring-tum Phi, The Rockbridge Report, and for professional news organizations where they were summer interns. The winning entries now advance to SPJ’s national Mark of Excellence competition, which honors the best in student journalism throughout the country.

Pinho received two awards for stories aired on WMRA public radio. A story about local musician Jonathan Chapman Cook won in the radio feature category. Her coverage of the name change by R.E. Lee Episcopal Church won for radio news reporting. A third piece, published on The Rockbridge Report, was a finalist.

Kanzinger was honored for feature photography for work produced at her summer internship at The GroundTruth Project, a non-profit online news organization. The piece examined the debate over a marine national monument off the coast of Massachusetts. She was a finalist in the same category for photos that accompanied a story about I-81 produced in a journalism course, “Multimedia Storytelling Design.”

A story written by Denham about Washington and Lee students affected by Deferred Action for Childhood Arrivals (DACA) won in the In-Depth News category.  The article was published in The Ring-tum Phi. 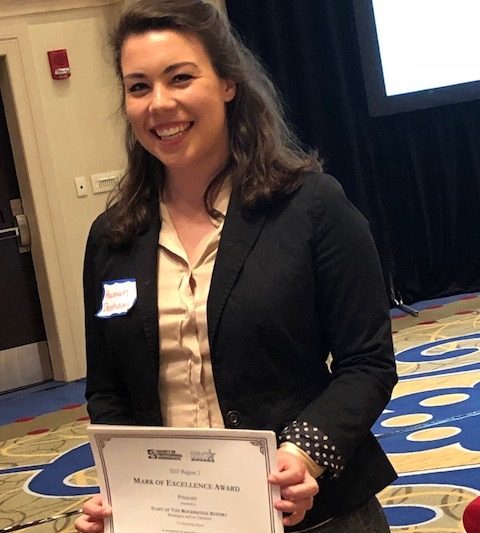 Kinsey Grant, who graduated last May and now works for the business news website TheStreet.com, won in the Television Breaking News category for coverage of a house fire on Winding Way, which aired on The Rockbridge Report.

The Rockbridge Report, a live broadcast and news website overseen by the Department of Journalism and Mass Communications, was a finalist in the “Best Independent Online Student Publication” category.

Region 2 comprises Virginia, North Carolina, Maryland, Delaware and the District of Columbia.  It is one of 12 SPJ regions.