“I was already very academically driven, but being a recipient of the Johnson Scholarship is a constant reminder of the goals I set for myself before college, and has helped push me even closer to these goals, whether they be academic in nature or not.” 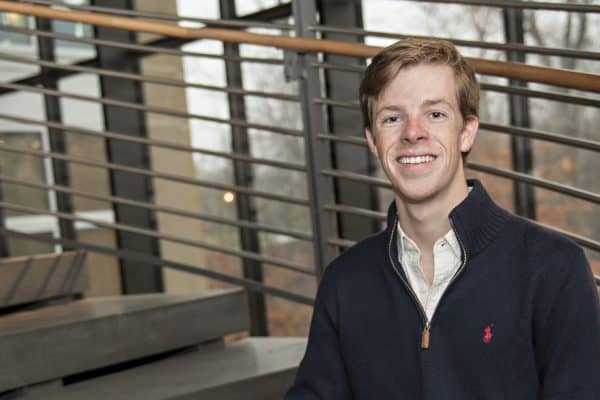 Meet Andy Cuthbert ’18, a pre-med neuroscience major with a serious love of the outdoors

Q: How did you first hear about the Johnson Scholarship?

I first heard about the Johnson Scholarship through my high school college counselors. I was really lucky to have some great college counselors as resources during my college search, and they did a great job matching up students with different universities based on interests.

Q: Were you considering any other colleges when you applied for the scholarship?

U.Va., Princeton, Yale, Vanderbilt and Dartmouth, among others. Being from Virginia, U.Va. was a great option for me due to its fantastic academic reputation and in-state tuition. I have family who have gone to Yale, Princeton, or Vanderbilt and so it made sense to put these three on my list.

Q: Why did you ultimately choose W&L?

I chose W&L mostly due to the school size as well as its academics. I found the small class sizes to be extremely attractive; it offers students the chance to connect with professors in a more intimate setting rather than force them to sit through a lecture in which they might be taught by a TA, which sometimes happens at bigger schools such as U.Va. In addition to that, the small school size does, in fact, offer students opportunities they might not get at bigger schools, such as research positions or grants.

Q: How has Johnson affected your views on leadership and integrity or on academics?

Coming into college, I was already very academically driven, but being a recipient of the Johnson Scholarship is a constant reminder of the goals I set for myself before college, and has helped push me even closer to these goals, whether they be academic in nature or not. Additionally, I think being a Johnson has pushed me to be an example for others here on campus.

Q: What is your favorite story about your W&L experience — if you had to pick one?

My favorite “story,” or experience, was spending the summer doing research here in Lexington with a group of close friends. One weekend, we went camping on the Appalachian Trail near the James River and spent the following day kayaking through the Class I, II and III rapids on the river. One of my friends flipped five times – it was hilarious. By the end of the trip, he had managed to lose a flip flop, a water bottle and his fishing rod.

Q: Do you have a mentor on campus? Faculty, staff, or another student?

I don’t think I can say I have one single mentor on campus, though I definitely know some faculty and other students that I look up to and admire. I know that at any time I could go to these people with any issue and could receive guidance on how to overcome it.

Q: What extracurricular are you involved in right now that you are extra-passionate about?

Right now, I’m extremely busy with my ski patrol training. I’m in the middle of the Outdoor Emergency Care course – it’s a first-responder course very similar to an EMT course. I grew up skiing quite a bit and always admired the patrollers, so to have the opportunity to be a member of National Ski Patrol is really cool to me. It also enables me to combine my interest in public health with my passion for skiing.

Q: What is your favorite campus tradition or piece of history?

My favorite story is one I frequently tell on tours. The Colonnade at W&L is a national historic landmark and has a statue of George Washington on top of the central building, Washington Hall. The story goes that during the Civil War, the Union Army was marching through Lexington and saw a statue on top of Washington Hall. The Union soldiers assumed the statue to be Jefferson Davis, president of the south at the time. These soldiers wanted to burn down the Colonnade; however, their general stated correctly that the statute was not Jefferson Davis, but rather George Washington. Thus the Colonnade was saved, and the Union soldiers instead burned down VMI.

Q: If you could travel back in time, what advice would you give to “first day on campus” you?

I knew what I wanted to study coming into college, so I took classes that put me on track for some science major. I wish I had taken more classes outside of the sciences, although because I’m close to completing my major I will have that opportunity my senior year. My advice to me (and other incoming first years) would be to take a variety of classes early on in your time at school. You’ll have plenty of time to complete a major, and could potentially find an interest that surprises you.

Q: If someone asked you “why choose W&L,” what is the one reason you would tell them?

I feel like a broken record saying this, but I’ll say it again anyway. I really like the small size of the school and its location in the Blue Ridge Mountains. The size allows me to get to know professors very well and have a wide range of friends. The location allows me to get away from whatever is stressing me out at the time and simply enjoy the beautiful views and surrounding nature.

Thinking about W&L for college? Why not apply for the Johnson Scholarship?

A little more about Andy

Why did you choose your major?
The neuroscience major is a combination of studies in biology, chemistry, psychology and physics. While it encompasses a broad range of studies, I found that the major required me to integrate what I had learned in one area of study with another. As I took courses throughout my first and sophomore years, I found that I was more interested in tying together studies from these areas rather than focusing more specifically on one subject. Additionally, the major dovetails quite nicely with the pre-med requirements.

What professor has inspired you?
Dr. Greg Pask. Unfortunately, he is leaving Washington and Lee following this academic year. I have taken two courses with him, and in those courses, I found the passion for his work quite admirable. I think he truly follows the mantra “choose a job that you love, and you will never work a day in your life” as closely as possible, something that seems to be increasingly difficult in this day and age.

What’s your personal motto?
Live your life to the fullest

Best place to eat in Lexington? What do you order?
Sweet Treats. Sunday morning brunch there is the best. I order blueberry pancakes or an omelet.

What do you wish you’d known before you came to campus?
What I didn’t realize (and I don’t think many people do) is that every other incoming first year is worried about the same trivial matters and everyone is on an even playing field. It’s what you do at college, not what you’ve done before college, that matters most.

Post-graduation plans:
I am planning to take a gap year and work as a ski patroller or ski instructor for a season in Colorado. Then off to med school!

Favorite W&L memory:
Leading an Appalachian Adventure pre-orientation trip this past September. I had a blast getting to know some incoming first-year students while hiking the Appalachian Trail

Favorite class:
So far, probably a history class I took sophomore year on American history prior to 1864. I’ve taken a lot of science classes and not as many humanities courses, so this class was a welcome break from that. It was also very interesting and well-taught.

Favorite W&L event:
Young Alumni Weekend. Getting to see my friends who have graduated and reminisce with them is something I look forward to every year.

What’s your passion?
I really enjoy being outdoors, whether I’m skiing, hunting, fishing or hiking. Being out in nature helps me clear my mind and forget whatever I’m stressed out about at that time.