Connecting the Dots of the Liberal Arts Monica Musgrave '18 is already double-majoring, but that didn't stop her from spending six-weeks in England studying two completely different subjects.

“Opportunities like this enable students like myself, who are interested in subjects outside of their intentional studies, to explore academic spheres that they’re interested in despite not specializing in them, enabling them to have a fuller academic experience during their time in higher education.” 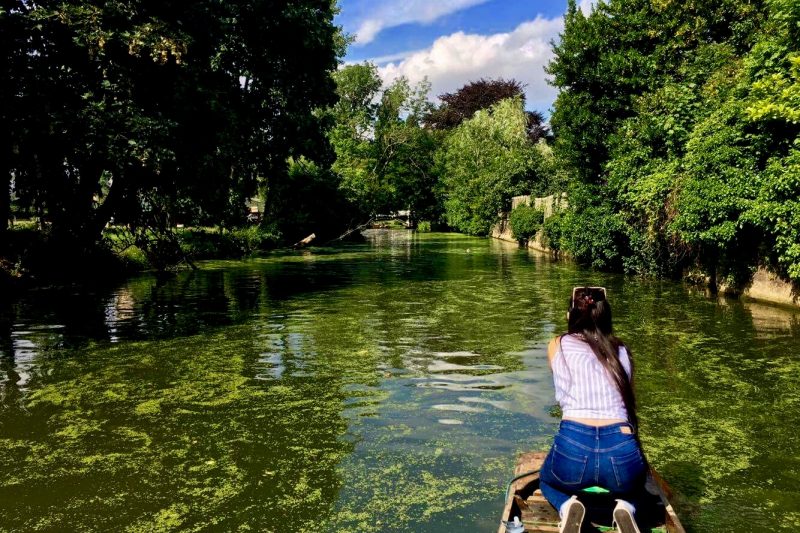 Monica Musgrave ’18 is already double-majoring, but that didn’t stop her from spending six-weeks in England studying two completely different subjects

Q. What did you do this summer?

I participated in the Virginia Program at Oxford (VPO), a six-week summer program designed to teach students from six different colleges and universities in Virginia about the history and literature of Renaissance England. It’s an interdisciplinary program open to students of all majors, which is what initially caught my eye.

Q. Where did this opportunity take place?

The program is carried out at St. Anne’s College of Oxford University in Oxford, England. I was able to visit London a couple days before I came to St. Anne’s, but I can definitely say that I much prefer Oxford; it’s much more homey. My favorite part of Oxford, however, was the University Parks where I go running. There’s a lot of open green space that backs up against a river that’s peaceful to follow along. If you keep going beyond the river, you end up in fields and farmland, and sometimes I’ll run into cows and horses on my route! 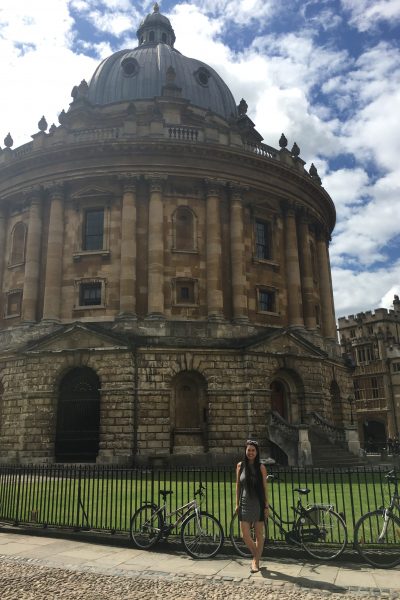 Monica with the Bodleian Library, the main research library of the University of Oxford, and one of the oldest libraries in Europe.

Q. What does an average day for you look like?

A normal day in the program started with a hearty English breakfast (I’m a massive fan of the beans!) and then lecture at 9:30 a.m. from world-renowned English Renaissance scholars. After lectures, we had tea and coffee and time for discussion. I usually went on a run after this, finishing with time to make it to lunch at 1 p.m. Then I spent the afternoon reading for my tutorial courses held on Fridays, with particular emphasis on the topic I was writing about that week, either English or history. Some afternoons, I was a little less studious, and I headed into town to explore — my favorite place downtown was the Ashmolean museum, the first public museum in the world! After dinner at 7 p.m., I either got back to my studies or headed to the pub for a pint with friends.

Q. What was the most rewarding part of your experience?

For me, the most rewarding part of this program was the fact that I was able to exhaustively study subjects I wouldn’t have time for at W&L. Since I’m planning to graduate with two majors and a minor, there isn’t often room in my schedule to pursue other subjects I’m interested in, like English and history. Being able to immerse myself in those two subjects wholeheartedly was immensely satisfying, particularly in regard to the literature-focused portion of the program. If I could pick up a third major, it would certainly be English.

Q. What was the biggest challenge you faced?

The biggest challenge I faced in this program is the fact that I had to gear up again for academics. Prior to the start of the program, I had been in Spain working as an au pair, so to switch into the rigorous study mode necessary for the kind of work I wanted to produce was definitely a difficult transition from poolside afternoons in Madrid, where I took care of two girls while helping them with their middle school-level homework.

Q. What have you learned at W&L that helped you in this endeavor, and what will you bring back to your life on campus?

I think that one of the biggest lessons I’ve learned during my time at W&L, in traditional liberal arts fashion, is that everything is connected. W&L has done a really fantastic job at integrating its students in the interdisciplinary world, through various means such as the courses it offers, the speakers it hosts, or the discussions it often holds. In instilling this appreciation for learning outside of one’s major(s), I have really been able to fully take advantage of the opportunity VPO has placed before me, and given me a different perspective from which to undertake all that I’ve learned. This distinct approach helped me to wholly embrace the program and bring back a deep understanding of a period in history of which I had previously been largely unfamiliar.

Q. Has this experience impacted your studies or future plans in any way?

While I’m not going to return to W&L to pick up a major in English or history, my experience with VPO has enabled me to make more and more connections with my other studies. While learning about the history of the monarchy during Renaissance England, I am able to analyze the power dynamics through the political lens given to me by my politics major whilst comparing them to their contemporary monarchs in Spain, of whom I have learned of through my Spanish major. Through VPO, I’ve been able to add further to my web of knowledge of the world to complement my directed studies at W&L.

Q. Why is this kind of experience important to W&L students?

Primarily, opportunities like these enable students like myself, who are interested in subjects outside of their intentional studies, to explore academic spheres that they’re interested in despite not specializing in them, enabling them to have a fuller academic experience during their time in higher education. Beyond this, the ability to go abroad and experience different cultures is important in creating the worldly and mindful students W&L endeavors to cultivate.

Q. Describe your summer adventure in one word: