Office Hours: Professor Sandra L. Reiter The Darrold and Kay Cannan Associate Term Professor of Business Administration studies what she calls “the intersection of business and the natural environment.” She arrived at that spot after studying engineering, management, business — and philosophy. 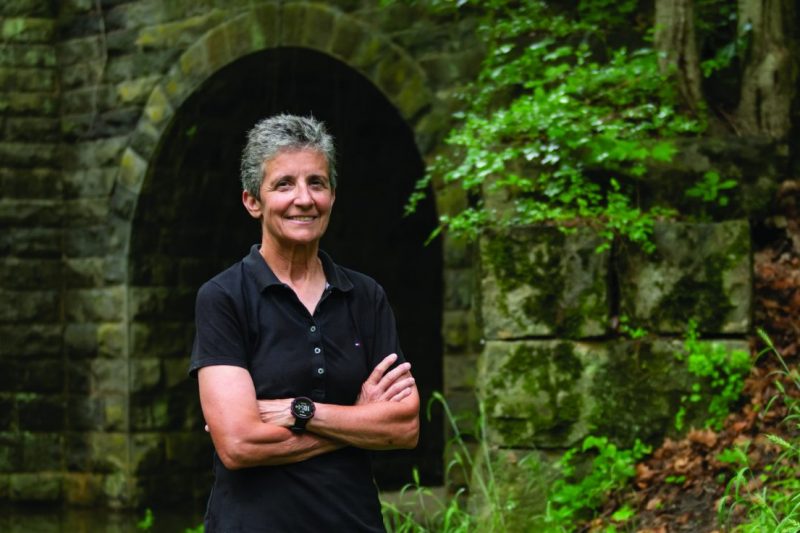 Q: What led to your affiliation with W&L’s Environmental Studies Program?

A: My interest has always been in business ethics or business justice, but some of my early opportunities have been at the intersection of business and the natural environment. In my very first term at W&L, I spent a week in the Guajira Peninsula of Colombia with a delegation to visit one of the largest open-pit coal mines in the world. We interviewed the indigenous people who lived on the perimeter of the mine and claimed that their health and environment had been harmed, and the management of the company that operated the mine. While I was naturally interested in the moral responsibility of corporations, some of my early opportunities focused on the environment. In my course Business and the Natural Environment, students analyzed a Lexington business’s environmental footprint and recommended ways to reduce that footprint.

Q: What drew you to engineering?

A: Neither of my parents went to a four-year college, and so I was not real savvy about college life and the kinds of things one could study. I knew that my strengths were in the quantitative skills, and so I thought that meant I had to major in math. But after studying math for a year or so, I worried that the only thing I could do with a math major was to teach school, and I didn’t want to do that! A friend said, “Why don’t you major in civil engineering?” (That was her major.) I said, “What’s that?” She said, “It is just applied math.” Well, that sounded good to me, so that is what I did.

Q: What prompted your shift from corporations and engineering to academia and business ethics?

I hated my corporate life, and I enjoyed philosophy. I worked for an aerospace company that promoted from within, and many of the management positions were filled with engineers. This is how I moved up the corporate ladder. After being promoted a few times, I decided to pursue my M.B.A. I enjoyed being back in school so much, I seriously considered going on to a Ph.D. then, but I didn’t think I could swing it financially. I got promoted again and ended up in the company’s headquarters. While it was a great experience and gave me the opportunity to travel around the world, this environment was not for me. If it hadn’t been for the influence of a friend and tennis partner, I probably would have endured the corporate world and retired early.

Q: How about that minor in philosophy you earned along with your Ph.D.?

A: One of my tennis partners was a University of Notre Dame philosophy professor. We would go out for beers afterwards and talk a lot about philosophy. He made many reading recommendations; one was the writings of philosopher John Rawls. Because of this influence, I took the great leap back to school full-time. Between my experience in the corporate world and my introduction to moral philosophy, it is not hard to imagine why I wanted to study business ethics. And I have never looked back.

Inside and Outside the Classroom

ON THE WALL: Diplomas for a B.S. in civil engineering, an M.S. in electrical engineering, an M.B.A. in management, and a Ph.D. in business with a minor in philosophy. Reiter came to W&L in 2006 following two decades of corporate engineering and management positions. She also heads the Business Administration Department in the Williams School.

ON THE COURT: “I have played tennis ever since I was 10 years old. I competed in local, state and regional tournaments from that age until I was in my 40s. I don’t play as much anymore, not because I don’t want to but rather because life is busy, and it takes planning and a partner to play with.”

ON THE RUN: “I switched to running in my 40s because it is just much easier to go do on my own and in my own time. I do like to run races of all distances (5K, 10K, half marathons and one marathon). I ran the San Diego Rock ‘n’ Roll Marathon and thought I would run more, but
it takes a lot of time to train.”