Professor Deborah Miranda Interviewed on Radio Show Miranda was invited on radio station KPFA’s UpFront to discuss Junipero Serra, the myth of California missions, and the colonization of native people. 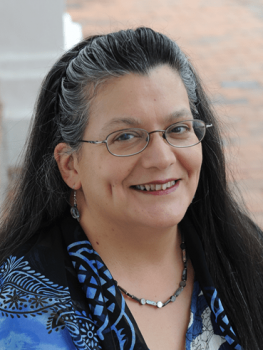 Deborah Miranda, the Thomas H. Broadus, Jr. Professor of English at Washington and Lee University, was a guest this week on UpFront, a show on radio station KPFA in Berkeley, California. During her interview, she discussed Junipero Serra, the myth of California missions, and the colonization of indigenous people.

Miranda, who is the author of four poetry collections and the book “Bad Indians: A Tribal Memoir,” is an enrolled member of the Ohlone-Costanoan Esselen Nation of the Greater Monterey Bay Area and is also of Santa Ynez Chumash heritage. Junipero Serra was a Franciscan priest who spearheaded the development of the mission system in California. Despite the fact that the mission system resulted in abuses leading to a 90% population loss for indigenous people, he has been made a saint by the Catholic Church. Statues of him have recently been defaced and toppled by activists.

One of the topics addressed by Miranda on the show is the mythologization of the mission system and the perpetualization of that idea through public school lessons.

“All of those [negative] things are erased when you are only presented with this ideal sort of fantasy that missionization was a good thing for Indian people and that the missionaries themselves were kind and loving,” Miranda said. “The idea that paternalism is actually a form of violence never enters into the conversation.”

Listen to the entire interview with Miranda on the UpFront website. Her interview begins at 1:35:00.