Putting Lessons to the Test Caroline Blackmon interned this summer with The Dunwoody Crier in Georgia. 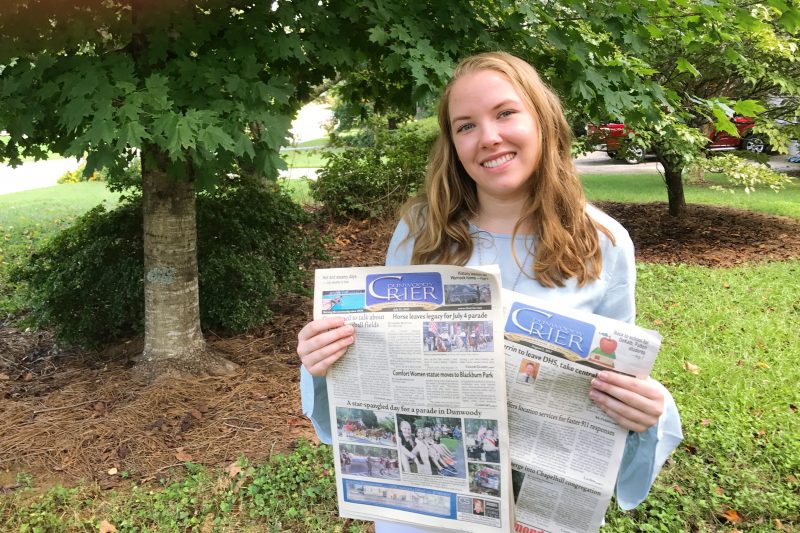 Caroline Blackmon interned this summer with The Dunwoody Crier in Georgia.

The Dunwoody Crier, a weekly newspaper in Dunwoody, Georgia (a suburb of Atlanta)

The Dunwoody Crier is delivered weekly to 23,000 homes and businesses in the cities of Dunwoody, Sandy Springs and Brookhaven in north metro Atlanta. The paper features many of Dunwoody’s restaurants, events and people.

I covered everything The Crier doesn’t have enough people to cover. For example, we deliver to a lot of Brookhaven, which is its own city and has its own city council, so I covered its government. I also went to events during the week that other people couldn’t attend. Also, the editor-in-chief knows that I have an interest in editing, so he let me come in when they were editing and putting together the paper so I could learn that process, as well. On average, I wrote about three or four stories a week, took all my own pictures (plus others for other stories) and helped edit 11 papers.

The best story I worked on was a story about a major construction project at an intersection in Dunwoody. Though the new intersection made a lot of people happy, it negatively affected those who lived around the intersection. They had to deal with construction for more than two years; even now, when the construction is finished, they still have holes in their front yards and cracked driveways. Also, the city of Dunwoody had been really unresponsive to them throughout the whole process and never gave them a heads-up about anything that would be going on. I interviewed about seven neighbors and two people from the city of Dunwoody. Then, two days after my story was published, a local CBS TV station covered the same story. So that was pretty cool to see my article transferred to a news broadcast story!

Definitely one of my mentors, Dick Williams, made an impression on me. He is the editor-in-chief of the paper and has worked in the newspaper and TV business for about 50 years, so he was part of journalism when it was in its heyday and has seen it transition and change over the past 20 years. He has taught me so many things about the business, about how to write better and about how to be confident in my role as a journalist. He also trusted me with bigger articles and more controversial topics throughout my time here, which helped me gain confidence.

I feel challenged every time I am struggling to find a source for a story or am struggling to get in contact with a source. For example, a very popular church called Calvary was transitioning to become a shoot-off of a different church called Chapelhill. This is an important story not because it’s the biggest church in Dunwoody, but because the building itself and the name “Calvary Church” was a staple in the Dunwoody community. We knew about a month in advance and I started calling people about two weeks before the transition. Nobody got back to me for more than 10 days. That was pretty stressful because I had to get the story out by the Monday before the launch of the new church (which was happening on a Sunday) because otherwise it would’ve been old news and that would’ve been very bad. Luckily, a nice pastor took pity on me and talked to me on a Friday (his day off) and ensured the story would happen on time.

The only thing that excited me about the location was that I got to live at home, and work was about 10 minutes away! Also, even though I’ve lived in Dunwoody/Atlanta my whole life, I’ve learned more during this summer working for The Crier than I have in the past 20 years.

Near the end of my internship, Williams said that I’m a natural at this business, so that was really nice to hear. I have doubts about whether I can make a career out of journalism, as it’s changing so much. But I really do love this work because I love talking to people and writing about what they love to do. It’s the best feeling in the world to make someone happy with something you write! Also, I know I still like writing for newspapers. Hopefully, I’ll get an internship next summer at a TV news broadcast station so I can see about that side of journalism.

I took Beat Reporting (arguably the most time-consuming class in the journalism major) the semester before coming to work for The Crier, and that was the best preparation I could have asked for. It got me used to being stressed about sources not answering calls and emails, and it taught me to be proactive so I don’t become stressed about deadlines. Thank goodness for Professor Locy, Professor Finch and the relentlessness of Beat Reporting!

Did any particular grant or other funding, besides your personal funding, help pay for this opportunity? Yes, the Catherine Ann Duggar Scholarship Fund, the Carter Glass Scholarship and the Wright Family Scholarship. I am so thankful to these three families for starting these scholarships for students like me who need a little extra help during the summer so I could work for the internship I wanted to without having to worry about funding.