Snapshot of a Pandemic Chris Johnson ’00 uses his camera to document the COVID-19 crisis. 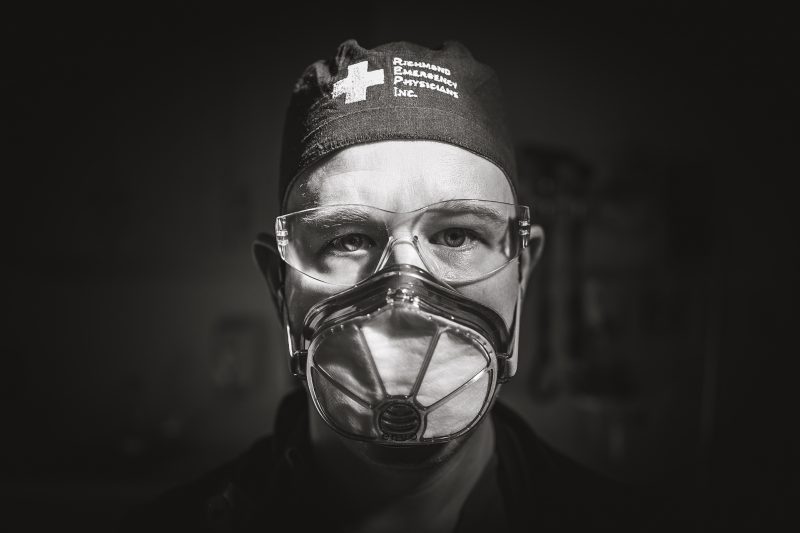 For the last three months, Chris Johnson ’00, a pediatric emergency room doctor at Bon Secours St. Mary’s Hospital in Richmond, has used his camera as a way to photo journal how the pandemic has impacted his world.

His monochrome portraits of his colleagues and environmental shots of his workspace offer a glimpse into the day-to-day life of those who keep hospitals operational and effective. Johnson posts the photos on his social media accounts along with detailed captions. He believes that the focus on environmental service workers, food service employees and patient-access team members showcases people who deserve more acknowledgment for their critical work.

“Especially in the emergency department, it’s all a team effort,” Johnson explained. “None of us can function without each other. But I noticed there wasn’t really a lot of recognition for some of the people you don’t necessarily think of as being really, really vital to what’s going on. The service workers are all at risk, too, just by being in the hospital. We couldn’t do what we do without all of them.”

Johnson’s passion for photography began in high school but flourished during his time at Washington and Lee. During his sophomore year, majoring in biology, he completed a lighting design course with the theater department and took photos of departmental dress rehearsals. In addition to his freelance theater photography, the Biology Department offered him access to a darkroom which allowed him to develop prints in his spare time.

“The hardest part is finding a space, like a darkroom, and then having equipment to use, because the equipment is expensive. But W&L had the equipment all there,” he said. “I’d buy my own chemicals to develop and make prints. I don’t have any friends who went to school where their college just gave them the key to the darkroom and just trusted them with that.”

As the COVID-19 crisis took hold of hospital systems across the country, Johnson and his team saw emergency room visits decrease by 50%. The photos Johnson captured of the empty waiting rooms and hallways underscores this decline.

“Patients don’t want to come in and risk getting sick at the hospital, where they’re around other sick people, but the hospitals are also empty because they don’t have visitors and families,” he noted. “When you walk through the halls, normally they’d be filled with family members or people who [already visited] the doctor and are going to the pharmacy to pick up medications or people in the cafeteria. It’s just empty, which is so weird because the hospital is never quiet. And now it’s just mostly silent.”

Despite the increased challenge and stress of working in the emergency room during a pandemic, Johnson has turned to his team and colleagues for support as they continue to treat patients in their community.

“You realize that you’ve got a job to do, and you look around and it’s scary,” he said. “You don’t know what’s going to happen, but there are the people you’re working with who are right there with you. It’s sort of always what we’ve done. You’re the person running into the fire when everyone else is running out. I don’t feel like a hero…. I don’t think I’m doing anything different. I just go to work. That’s what we do, no matter what’s going on.”