Washington and Lee University’s Spring Term, during which students take a single intensive course for four weeks, aims to provide unusual, innovative educational experiences. The shift to virtual instruction during COVID-19 sent professors scrambling to reinvent their classes, but it also created once-in-a-lifetime opportunities. Here are a few examples.

The Plague and the Pandemic

For Assistant Professor of History Melissa Vise, Spring Term offered a tantalizing prospect: the chance to teach Boccaccio’s “Decameron,” a 14th-century Italian masterpiece set during the Black Death, to students living through a pandemic. “If there was ever a time to teach the ‘Decameron’ and a setting in which to do it well,” she said, “this is it.”

The “Decameron” follows a brigata, or “happy company,” of nobles fleeing plague-ridden Florence for the countryside. There they hole up in a villa and swap stories to entertain and process what they saw in the city. For the course, students read the stories and analyzed secondary sources and historical articles.

The readings, which students often found shockingly racy, could be entertaining, but Vise posed deeper questions. “Boccaccio’s conceit is that storytelling offers humans some sort of reprieve or cure to what ails them,” she said. “When science fails, the humanities help. So we’re asking, what is the role of the humanities in a crisis?”

Syed Rafay Hassan ’22 thought the class would be a downer. “Turns out,” he said, “it was something completely different. Laughter can help us stay sane, and if this pandemic has taught us anything, it’s that our first line of defense in a battle like this is our own sanity.” 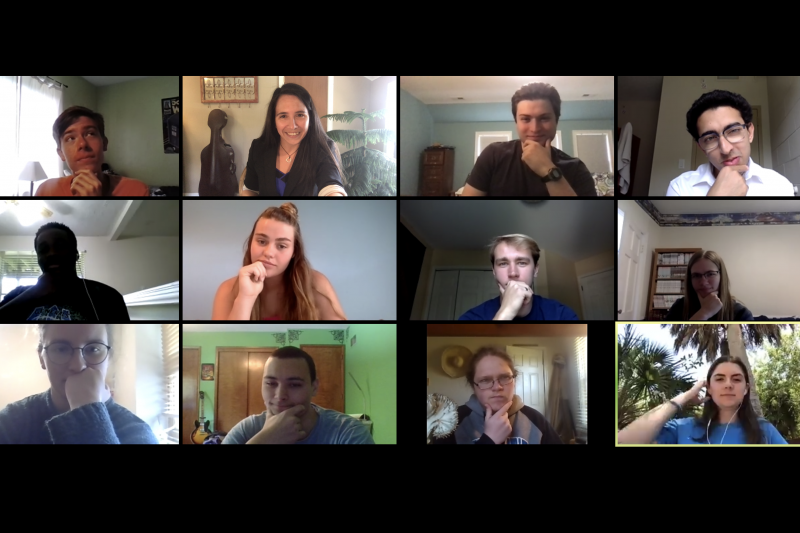 Melissa Vise’s class had lively discussions of the “Decameron” on Zoom.

Graduate Work as an Undergrad

According to Visiting Assistant Professor of Biology and Environmental Studies Sonny Bleicher, our understanding of ecology advances not just through field work, but through careful analysis of previous studies. “You have to go in and ask, ‘Have many different studies reached the same conclusion?’” he said. “Is this a repeating pattern? And can I justify it statistically?”

When COVID-19 made the field research he was planning for his Spring Term course impossible, Bleicher gave his students a boot camp on meta-analysis—investigating multiple papers to draw conclusions about a topic—instead.

In teams of two, they investigated hundreds of papers on red squirrel behavior and coyote predation of deer in the United States. As the course progressed, they began to sound like graduate students, pointing out shortfalls in the work they were analyzing.

Bleicher hopes to publish each team’s meta-analysis later this year. “Most of my students are seniors,” he said. “Getting a publication will push their career forward. And it’s a life skill to understand that there are multiple ways of looking at data and published information to draw conclusions.”

Students investigated the leadership of Ernest Shackleton after his ship Endurance sank in Antarctica, the fictional leaders in Margaret Atwood’s novel “The Handmaid’s Tale,” Nelson Mandela in prison and Donald Trump during COVID-19.

“It’s been really cool to go back and forth between other crises and the current crisis,” Schatten said. “It’s an interdisciplinary look at the coronavirus and how organizations are responding, and within that, how leaders are stepping up to the plate, or not.”

Schatten filled his Zoom lectures with charts, graphs and headlines to keep the learning environment dynamic. Students, who spent much of class in small group discussions, also analyzed themselves as leaders, evaluating their strengths and weaknesses for situations they might experience in their careers.

“Instead of just talking about general leadership,” said Donald LeCompte ’21, who took the course, “we’ve been able to explore case studies of leaders facing crises as they relate to COVID-19. It’s allowed us to think critically about decisions that affect our day-to-day lives, and it’s prepared us to be successful crisis managers as we take on leadership roles.” 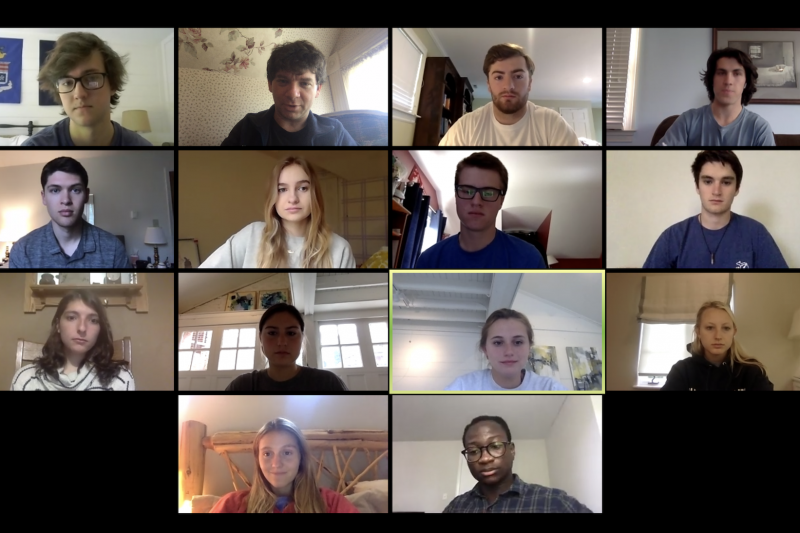 Jeff Schatten and his class discussing Nelson Mandela over Zoom.

For Assistant Professor Ryan Brindle’s Spring Term cognitive and behavioral science course on sleep, students usually conduct a detailed sleep study in an on-campus lab. This year, they studied their sleep, and their sleeping environment, at home instead.

“There are definitely sleep differences now that students are home,” Brindle said. “They’re sleeping later and longer. On campus they sleep less, but go to bed earlier and wake up earlier.”

Brindle assigned them three major experiments: a sleep diary, a task that tested learning in relation to sleep, and a light survey using home-built spectroscopes that attach to a smartphone. He sent them each a package of materials before the term started, and between experiments they studied the science of sleep. They learned about subjects from sleep measurement and circadian rhythms to the physical effects of sleep deprivation and its implications for public health.

After the experiments, students submitted data to Brindle online and discussed their results. “We’ve had a lot of fun,” he said. “For their final project they’re making PSA-type sleep health videos explaining the importance of sleep and how to get better sleep, aimed at the college population.” 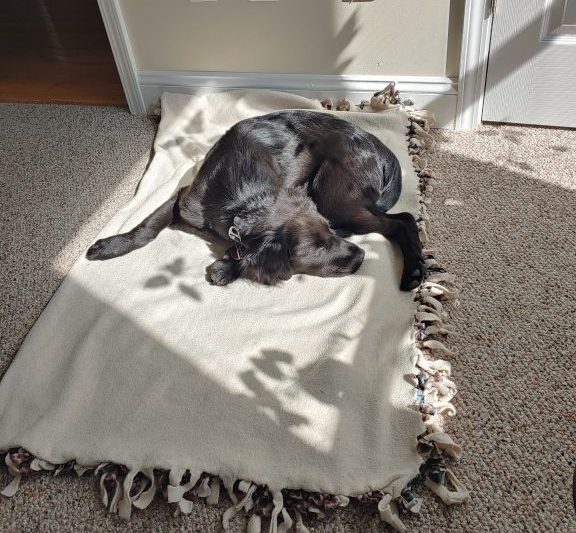 Assistant Professor Ryan Brindle’s puppy Cooper served as an unwitting assistant, kicking and growling in his sleep during class to demonstrate REM sleep during development.

“Framing a Franchise: The Business of Entertainment,” a business administration Spring Term course taught by Assistant Professor Stephen Lind, took a turn into virtual reality this year. In the past Lind’s students have analyzed how franchises are made physical at theme parks. This year they used Oculus Quest VR headsets — included in their course fees — to enter virtual reality, exploring games like “Star Wars: Vader Immortal” and “Star Trek Bridge Crew” in VR to see franchises translated into cutting-edge media.

Lind’s course required students to uncover the workings of the mega-franchises that dominate American entertainment. “Each class,” he said, “we start with an industry report in which a student analyzes a piece of news they’ve read in an industry trade magazine.” Nearly a dozen entertainment professionals — including game show producers and Marvel and Disney+ executives — spoke to the class via Zoom. The semester culminated in students creating detailed reports on franchises, evaluating them in areas from IP ownership and licensing to financial success and the impact of COVID-19 on their prospects. 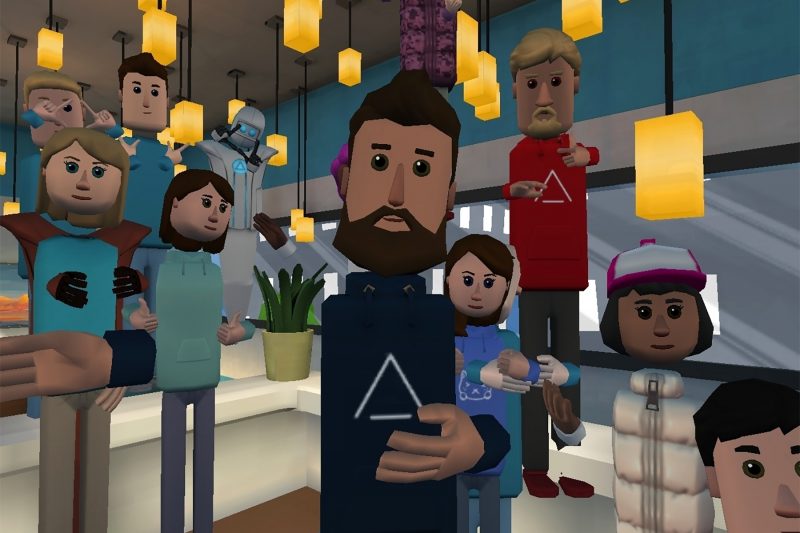 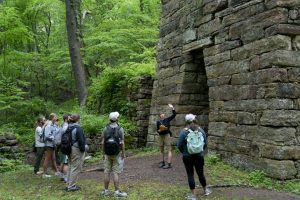 Immerse Yourself in Spring Term! 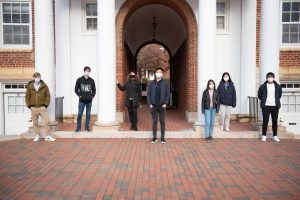