Squirrels and Grapes on the Dinner Table This plate, a recent gift to W&L's Reeves Museum of Ceramics from local collectors Joan and Jay Crawford, provides a window into Chinese culture and the material lives of one of Virginia’s most prestigious families. 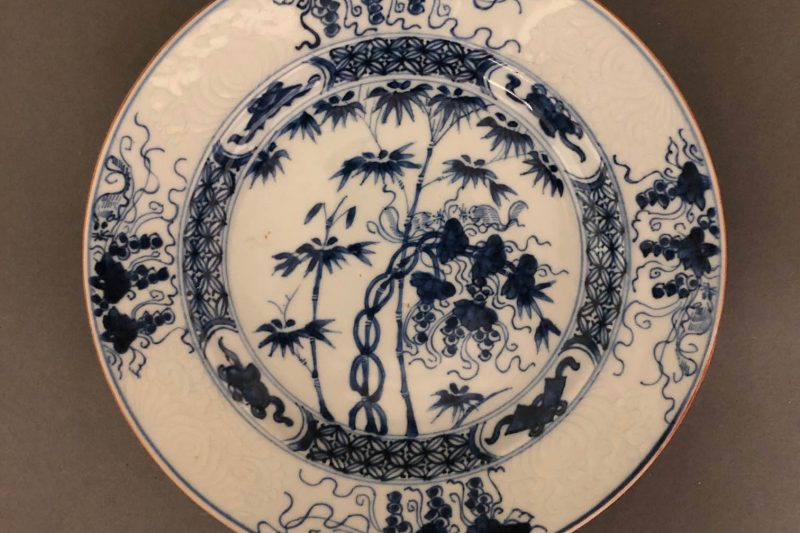 This plate, a recent gift to W&L’s Reeves Center, provides a window into Chinese culture and the material lives of one of Virginia’s most prestigious families.

This plate, hand-painted in blue with a scene of two squirrels cavorting on a bending bamboo stalk intertwined with grape vines, is a recent gift to the Reeves from local collectors Joan and Jay Crawford. It provides a window into Chinese culture and the material lives of one of Virginia’s most prestigious families.

In Chinese design, many elements are symbolic, so what might first appear as a simple, decorative scene in fact can be conveying a message or an idea. In traditional Chinese culture, sons were seen as necessary to carry on their family name, worship their ancestors and support their parents when they got older, and many images express a wish for many sons. Squirrels were thought to have great reproductive power, and clusters of grapes symbolize abundance, so together they represent a wish for many sons and grandsons for generation after generation.

Scenes of squirrels and grape vines were popular in Chinese design, and they appeared on a range of objects during the Ming (1368-1644) and Qing (1644-1912) dynasties, from textiles to ceramics. Painters in the porcelain-producing city of Jingdezhen began to use the motif to decorate porcelain destined for export to Europe around 1700, and even though its message of a wish for many sons would have been lost on Western consumers, the design proved popular and was used at least through the 1750s.

Examples went all over the globe to such far-flung places as Turkey, South Africa, Germany, Sweden and England. Pieces with this design also made it to Virginia, where they graced the dinner and tea tables of a number of wealthy residents, including the Washington family at their estate, Mount Vernon. 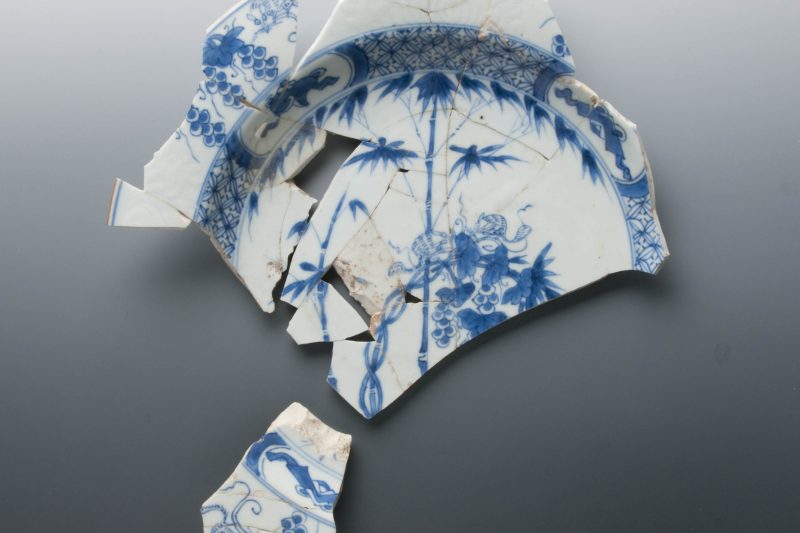 This plate, which was made in Jingdezhen, China, between 1730 and 1750, was excavated at Mount Vernon.

Archaeologists at Mount Vernon have found at least eight dinner plates decorated with squirrels and grape vines that were broken and thrown away sometime in the 1740s or 1750s. They probably belonged to Lawrence Washington and his wife, Anne Fairfax, who lived at Mount Vernon from 1743 to 1752. They owned a grand array of ceramics, glass and silver, which allowed them to dine in style, showing off their wealth, sophistication and connections to the global economy that moved goods like porcelain from China to Virginia. Among the fine tableware stored in the hall (which would have been a grand room, not a passageway) in the inventory made after Lawrence’s death were “1 dozn blew [sic] and white China plates,” which may in fact be the set from which the broken plates came.

Matched sets of plates were what one Maryland gentleman called “instruments for the luxury and elegance of life.” They created an ordered, symmetrical arrangement on a table and allowed each diner to have their own, individual plate (rather than all eating out of a single dish, as was common in earlier generations). They also created an ordered, symmetrical arrangement on a table. Along with the individual cutlery and glassware that accompanied them, matched sets of plates were an increasingly important accessory for individuals who wanted to show that they knew the proper etiquette for fine dining or, in the word they would have used, that they were “genteel.” Knowing these rules of refinement, and owning the objects necessary to live a “genteel” life, were necessary for members of Virginia’s ruling elite as a way of showing off and legitimizing their wealth, status and authority. Both Lawrence Washington and his half-brother George understood this and made sure to acquire the tools they needed to proclaim and maintain their social, political and economic status.

Lawrence died in 1752, leaving Mount Vernon to his half-brother, George Washington. For several years, George leased the house from his sister-in-law Anne and gained full ownership in 1758, the year he married Martha Dandridge Custis. Based on archaeological evidence, it is possible that the plates were thrown away following Lawrence’s death as part of a general clearing up of the house, though it is also possible that some remained in use by George during the first few years he lived there.

While we know nothing about the history of this particular plate, we do know that Washington would have seen plates just like it many times, either while dining with his brother or living as a bachelor at Mount Vernon. Though its message of a wish for many sons may have been unrecognized by Washington, he certainly would have understood its message of wealth, sophistication and gentility. 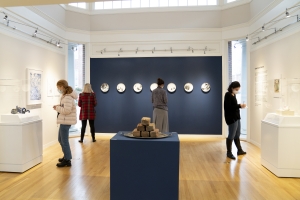