Starting a Lending Library Edwin Castellanos '20 created a system that allows students to save money by borrowing donated textbooks. 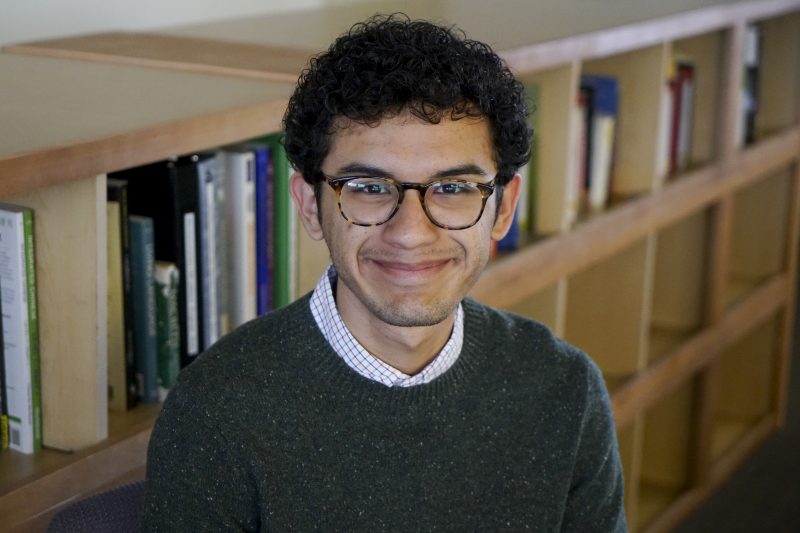 Edwin Castellanos ’20 is pictured in front of the FLIP lending library, which he founded and which provides textbooks to first-generation low-income students.

“FLIP has been a constant reminder of the outcome and positive effect that taking initiative on the issues that matter most to every student can have on others.”

Shortly after our  Volunteer Venture trip to Baltimore, Kiki Spiezio ’18 and I walked through every aisle in the University Store. She instructed me to check the school’s prices and those online simultaneously. I noticed how much the prices varied from book to book, and was surprised by how much cheaper some books could be online compared to the store. Kiki emphasized that although some of my scholarship money is allotted for books, I could save money by purchasing them online or renting them from Amazon.

Days later, I spoke with other Quest Scholars and was taken back to hear how much money they had paid for their books. Many did not realize that they could save money by purchasing their books online or renting them for the semester. The scholarship money they had spent on books could have been used for a flight home for school break or for their necessities while on campus.

I was on social media later that semester when I came across the efforts of several students at universities with lending libraries. Kiki and I had conversations about what we could do on the W&L campus to help students, and she encouraged me to take the initiative on the issue. I learned more about how other schools handle the process and began to contact different people to see if they would be willing to donate books. First, I asked friends, and they sent messages on their GroupMes, posted on social media accounts, and sent emails to the head RA and CA for their halls.

I figured I would only receive a few book donations, so I began storing them in my dorm room in Graham-Lees. To my surprise, by the end of my first year, I had many books stored in bins in my room. My parents were surprised to see my room filed with books and didn’t know what to do with them when they came to pick me up.

Over the summer, I worked on an Excel spreadsheet that could be accessed by everyone identifying as a first-generation or low-income student. Kiki then contacted me and asked if I would be interested in joining a new campus group called the First-Generation Low-Income Partnership (FLIP) with her and Taylor Reese ’19. I agreed and made the lending library a part of FLIP.

Once I moved back for sophomore year, the books were stored in a bookshelf that my room had in La Casa Hispanica. I shared the spreadsheet with students we knew identified as first-generation or low-income, and I had some students come to the house or meet up with me to get the books they needed.

FLIP has been a constant reminder of the outcome and positive effect that taking initiative on the issues that matter most to every student can have on others. One might not always find what they’re looking for, but it doesn’t mean they can’t create the resources, environment and space they would desire to have for themselves and others.

I am president of the Latino Student Organization (LSO), co-founder of the First-Generation Low Income Partnership (FLIP), communication and events chair for the QuestBridge Scholar Chapter, interpretations chair for English for Speakers of Other Languages (ESOL), and am involved in club tennis and Rotaract. I am also a Volunteer Venture Pre-Orientation trip leader.

Professor David Baluarte at the law school and Professor Seth Michelson have been the most inspirational to me during my time at W&L. Working with Proffessor Baluarte at the Immigrant Rights Clinic has allowed me to see how passionate he remains for his work with the local immigrant community and beyond. Professor Michelson’s work in a detention facility and publication of “Dreaming America: Voices of Undocumented Youth in Maximum-Security Detention” captures his desire to provide a voice for those who often go unheard. They’re both examples of the impact one can have when pursuing what you’re most passionate about.

“Se agradecido por lo que se te ha dado, y da de regreso,” which translates to “Be thankful for what you have been given and give in return.” That’s what my mom has always taught me. I wouldn’t be here if it weren’t for everyone’s help in many aspect of my life.

Napa Thai is the place to go when in Lexington. You can’t go wrong with chicken pad Thai.

I recently read “Stranger: The Challenge of a Latino Immigrant in the Trump Era” by Jorge Ramos, and I recommend it to everyone. I felt understood and represented in a book, which I don’t seem to find often. It’s relevant and helpful to understand the many difficulties and challenges that exist today for Latinx immigrants.

My favorite class is the capstone course for my Latin American and Caribbean Studies minor. It’s usually a class that’s offered for juniors and seniors, but I was able to take it as a sophomore thanks to Professor Michelson. I was able to work on research for detention facilities and its effects on immigrants in the United States.

I came from a high school with more than 3,500 students and wanted to attend a smaller university that allowed me to form close relationships with my professors and classmates. I was able to visit campus through a fly-in opportunity and experience this with my host student and beyond. As a Quest Scholar at W&L, I am able to attend and be a part of the close-knit community without putting a financial burden on my family or myself.