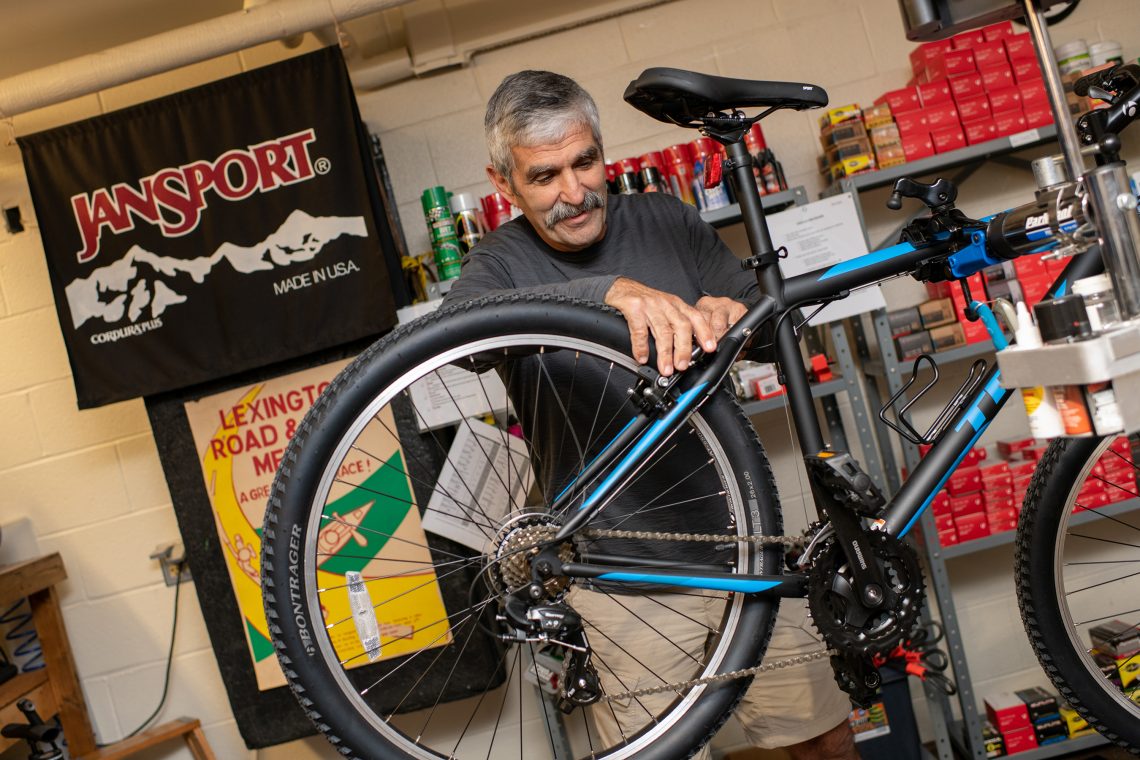 “It’s rather dumb to be driving a car to a class or activity that is only a few blocks away. Use a bike instead and contribute to the battle against global warming.”

Situated between the Sigma Chi and Kappa Sigma fraternity houses on Nelson Street, and just a stone’s throw from W&L’s ARC house, the grand, columned Sustainability House is home to up to 16 students, not to mention a host of environmental initiatives. Sustainability House’s newest community effort peddles carbon-friendly transportation: It’s a bike shop where students can borrow, rent and purchase bikes; learn about bike maintenance; and even join others for cycling adventures.

Sustainability House has two goals: “to live communally and explore ways to minimize human negative impacts on the natural environment, and to offer education and information to the campus community.” Kim Hodge, director of sustainability initiatives and education and adjunct professor of environmental studies, stressed that, in screening would-be residents, she wants those students who walk the talk. She’s looking for “somebody who is actually involved, who takes this personally and has something they are willing to contribute.” Hodge, along with Thomas Agostini ’19, Sustainability House Community Advisor (CA), helps select residents from the dozens of applications received each February.

Current residents of Sustainability House are members of W&L’s “compost crew” – “and that’s a dirty, dirty job,” Hodge explained, clearly in admiration. Others are active on the Student Environmental Action League (SEAL), and still others help the university grow its own food in the university’s raised-bed garden. Agostini, who is also head of the CA program campus-wide, encourages sustainability efforts by placing a jar in a common area. Every time a resident takes meaningful environmental action, he drops a rock in the jar – when it’s full, he treats house residents to lunch or dinner. “I want people who have cool ideas and who really want to live here,” he said. 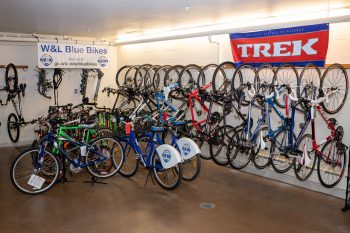 Some of the inventory of the W&L’s bike shop – available to students for free or a very small fee.

The latest cool idea to emerge from Sustainability House is its basement bike shop, open Monday-Saturday (click here for hours). The shop offers 20 bikes for the W&L community’s use, including Blue Bikes for cruising around campus and town and a number of road and mountain bikes. Rolf Piranian ’74 has been with W&L for over four decades: as a college student, as its men’s soccer coach, and most recently, as an associate physical education professor. His newest passion is overseeing the shop, where he runs the rental program, takes students on guided trips, and teaches students how to fix their own bikes (Piranian previously volunteered with the Blue Bike program, which is now run out of the bike shop. The Blue Bike program was launched in 2012 thanks to the generosity of Jamie Small ’81 and his wife, Alison, who are parents of Eileen Small ’15).

“We’d been trying to build a bike program here for many years,” said James Dick, director of outdoor education. “So this summer, Andy Hunter, the owner of the Lexington Bike Shop, called me up and said, ‘I lost my lease and I’m going out of business, I have to get rid of my inventory.’ His bike shop was a Lexington staple; it had been there for 42 years.” Dick called Steve McAllister, treasurer and vice president for finance and administration, and Sidney Evans, vice president for student affairs and dean of students. Time was tight — Hunter wanted an answer immediately.

Funds were quickly approved. “Steve said, ‘This sounds like a great idea. If you think it’s a good idea to buy the inventory, buy the inventory,'” Dick recalled. “And Sidney said, ‘If Steve can find the money, let’s make it happen.’ Sidney is a make-it-happen type of person.

“We had one week to move 40-plus years’ worth of inventory, in the middle of summer. The hard work of moving was done by Lucy Raney, utility crew supervisor, and her crew.”

The bike shop offers the best deals in town on rentals: For just $10 including tax, students can rent a mountain bike for three days. Blue Bikes can be used for free (register here).

“Mountain biking is my thing,” said Piranian, who is thrilled about his new role and the ever-growing bike-related offerings available to students. Piranian is currently working on a Top-10 list of area mountain biking trails for various activity and expertise levels. “Brushy Hills [off Union Road] is a beast,” he said, and “not for everyone. Carvin’s Cove [near Roanoke] is so smooth and easy, though. It’s my No. 1.”

Piranian hopes to see more students visit the bike shop as word spreads. “There previously hasn’t been much of a bike culture at W&L, and we’re trying to build that. It’s rather dumb to be driving a car to a class or activity that is only a few blocks away. Use a bike instead and contribute to the battle against global warming.” 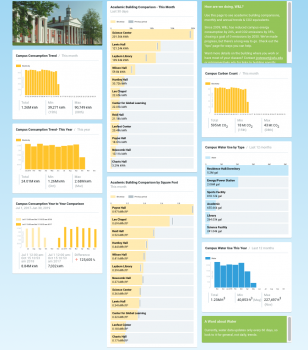 On Power Trip, members of the university community can track the energy use of various university buildings and residences, even comparing stats for a little friendly competition. The site also features heat maps that show energy intensity: red and yellow indicate when more energy is being used than usual, which can help spotlight troublesome patterns and, hopefully, encourage smarter usage. The site also includes energy-saving tips, like closing windows and doors when the AC or heat is on; limiting showers to eight minutes or less; and turning off lights when exiting a room. Since 2009, W&L has reduced campus energy consumption by 24 percent, and CO2 emissions by 35 percent. The aim is to be a zero-emissions campus by 2050.