Tessa Horan’s Passion for the Environment Meet Tessa Horan '18, a pre-med, self-proclaimed "tree-hugger" with big plans for making the university - and the world - a little greener.

“As I think about my plans and goals for myself, SEAL, CCL, and the world, I am comforted by the knowledge that we can make a difference.” 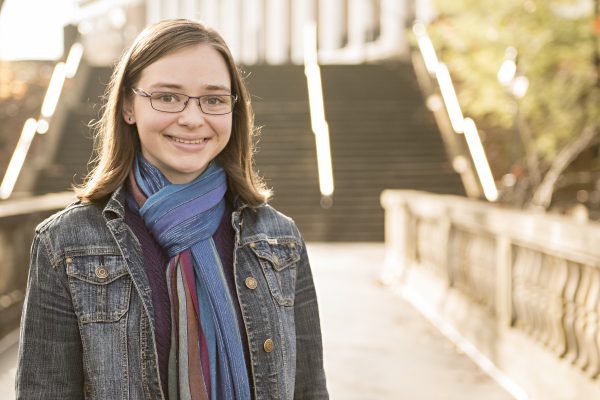 Meet Tessa Horan ’18, a pre-med, self-proclaimed “tree-hugger,” with big plans for making the University – and the world – a little greener.

Many labels are used to describe the aspect of my life that I would summarize like this: I care about all of creation, and I want everyone to give love and respect to all life.

This conviction is rooted in the love of nature I learned in childhood, which grew into a passion for environmental protection, then budded a commitment to sustainable living, and finally bloomed activism for global change.

It has led me to my present roles as VP of the W&L Student Environmental Action League (SEAL) and leader of the Lexington chapter of Citizens’ Climate Lobby (CCL), and my involvement with these two organizations has deeply shaped my W&L experience.

When I entered college, I was seeking ways for my budding environmentalism to bloom. SEAL gave me a way. Just a couple of weeks after starting my freshmen classes, I traveled to NYC with a group of SEAL members to participate in the People’s Climate March, which is still one of my favorite memories from my time at W&L. Sophomore year, I stepped up as secretary of SEAL and enthusiastically worked alongside my friends to create a university policy proposal for event sustainability, and to petition for the installation of solar panels with the third-year housing project. While the event policy proposal was received well by the administration and is helping to create real change on campus, the solar panel petition was rejected.

For me, these two projects embodied two opposite but equally important lessons that I learned that year: The hard work of a small group of people has the power to change an entire institution, but all the hard work of a group is sometimes not enough to change anything. When the truth of that second lesson tempts me to give up, I remember the equal truth of that first lesson. Failure is always a possibility when you try something – but it’s a certainty when you don’t try anything.

Those same two lessons have recurred in my work with Citizens’ Climate Lobby, which has been one of the most formative and gratifying experiences of my life. I learned about CCL at the end of freshman year, and I was sold on it almost immediately. They won over my mind with the economic and environmental logic of their Carbon Fee & Dividend proposal (learn about it at citizensclimatelobby.org), and they won over my heart with the beauty of their nonpartisan, respect-based philosophy and their caring, positive community. I was eager to start a chapter and share the ideas I had discovered – but it proved more challenging than I expected. I experienced a great deal of failure and disappointment during that first year as I realized that CCL was much harder to sell to other people than to myself. Yet, with the undying support of a few close friends and family members (shout-out to Sequoya, Kim, Dylan, and my parents!), I persisted.

I believe my hard work is beginning to pay off – there has been at least one new face at every CCL meeting this year, and we have made real contributions to the national political advocacy for carbon pricing legislation.

As I think about my plans and goals for myself, SEAL, CCL, and the world, I am comforted by the knowledge that we can make a difference – and failure isn’t always the worst thing that can happen. In words more eloquent than my own, “Nobody made a greater mistake than [s]he who did nothing because [s]he could only do a little.” – Edmund Burke

A little more about Tessa

Why did you choose your major?
Environmental Studies allows me to pursue my interests through an interdisciplinary approach – I love the variety and flexibility available with this major.

What faculty or staff member has inspired you?
So many! I am especially grateful to Kim Hodge for her support of my environmental work.

What’s your personal motto?
“Never doubt that a small group of thoughtful, committed citizens can change the world – indeed, it’s the only thing that ever has.” – Margaret Mead

Best place to eat in Lexington? What do you order?
The Bistro – Napoleon Eggplant Portabella

What do you wish you’d known before you came to campus?
I wish I had known that W&L would become my home. It took me a while to feel like I belonged, and at times I thought I never would. Having that hope would have helped me through my first year.

Post-graduation plans:
I plan to take a gap year before pursuing medical school and a master’s degree in public health.

Favorite W&L memory:
What makes my memories special are the people in them. Whether we’re eating dinner, watching movies, going to dances, hiking, playing games, going to concerts … I cherish every moment spent with the friends I love.

Favorite class:
Richmond Term! It’s a spring term program for pre-med students. I shadowed a urologist, an obstetrician, an orthopedic surgeon, and a pediatrician (all W&L alums!) for four days each, and it was a blast.

Favorite W&L event:
I love all the theater and music productions! My favorite has probably been “Spamalot.”

What’s your passion?
Serving others and serving God

What’s something people wouldn’t guess about you?
I play French horn in the Wind Ensemble and piano in my free time.