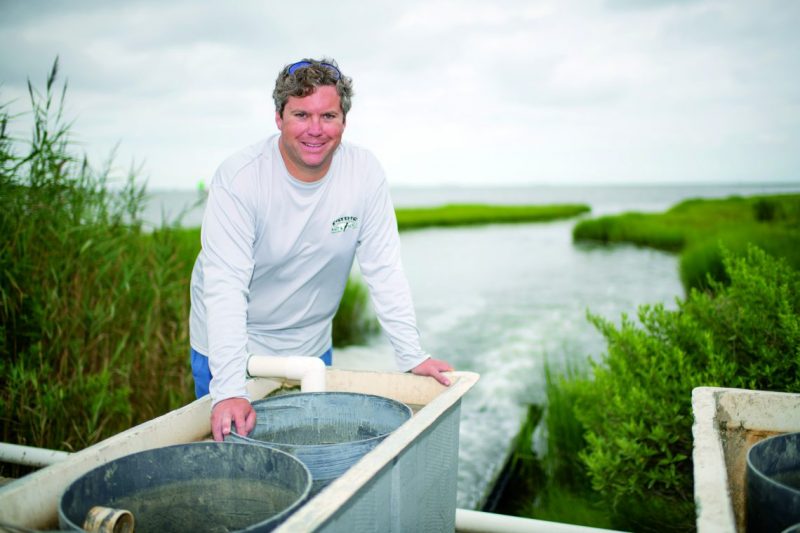 “We need the Chesapeake Bay to continue to improve. We’re making substantial strides in reducing pollution, but I still think there’s a long way to go.”

Ballard lives in Norfolk with his wife and two young boys and commutes, sometimes by boat, to his office in Cape Charles, Virginia. “It’s a small business, so sometimes you’re making decisions on large capital investments or on pieces of land to buy. Other times I fix the telephones.”

The company owns two hatcheries, one in Cape Charles and another in Willis Wharf, on Virginia’s Eastern Shore. Here, staff induce clams and oysters to spawn. The resulting larvae, or seed, grow under carefully monitored conditions until they’re large enough to transfer to one of 25 grow-out locations along the Eastern Shore or in the James River to be harvested years later. 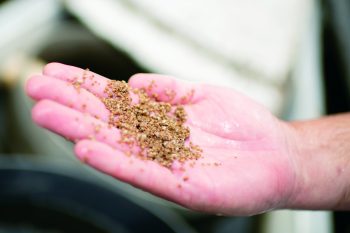 “The hardest part of my job is finding great people that will manage that process and care for the seed like they were children,” Ballard said. “Fortunately, we’ve been blessed to find them.”

Ballard rarely dons his chest waders. “I am largely a desk-based farmer,” he joked. “I get out on the boat occasionally, but not too often.” When he does go out on bay, Ballard is mostly talking with employees.

Without a doubt, Ballard is an enthusiastic champion of oysters and clams. “I’m not sure there is a better food when you look at it. First off, oysters and clams are healthy for you because they are loaded with omega-3 fatty acids.” He also noted that bivalves circulate water through their gills to eat, removing pollutants in the process — the equivalent of nature’s Brita pitcher.

“They’re actually improving the environment and cleaning up the Chesapeake Bay and are one of the best ways to address non-point source pollution, mostly run-off from farms and developments, that can cause algae blooms,” he said. “Clams and oysters filter out that algae and consume it.” However, when bivalves are in their early-life cycles, the slightest changes in water quality can have enormous repercussions on his yield. “We need the Chesapeake Bay to continue to improve. We’re making substantial strides in reducing pollution, but I still think there’s a long way to go.”

Until his junior year at W&L, Ballard hadn’t given much thought to whether his future included joining the family business. But then his father died unexpectedly. “All of a sudden, I was trying to decide between finishing school projects or going home to help for the weekend,” he said. “That’s when I first really started to learn about the business and consider whether I was going to join it.”

After graduating from W&L with a degree in business administration, Ballard worked for BB&T Capital Markets. At the end of his second year, his mother asked if he was ready to run the family business. If not, the company would likely be sold. “I decided to come home,” he said.

Still in his 20s, Ballard had a lot to learn — and he needed to learn it quickly. “Originally, my biggest mistake was probably trying to focus too much on trying to learn what I didn’t know,” Ballard said. For example, He tried to give himself a crash course in marine biology, instead of relying on the staff scientists.

On the other hand, he’s proud of how much more tech savvy the company has become under his reign. Using modern- tracking software, customer representatives can tell a New York customer where the clams she purchased grew and the date they were processed. “Our product is fully traceable from farm to fork,” Ballard said. “It gives consumers confidence that they know where their food is coming from.”

Ballard did face a major test of his leadership in 2010 after discovering a trusted employee had embezzled $2.3 million. The news, surprisingly, reassured him about the business’ future. “We were performing poorly,” he said. “All of a sudden I had a big explanation as to why.”

Today, Ballard Fish and Oyster Co. is sitting pretty. The $30 million-a-year enterprise raises the most littleneck clams of any aquaculture business in the U.S.

“I have had a lot of fun doing it,” Ballard said. But he’d still rather eat a burger.