The Path to Publication Matthew Rickert '18 completed the daunting task of updating the "Outing Club Guidebook." 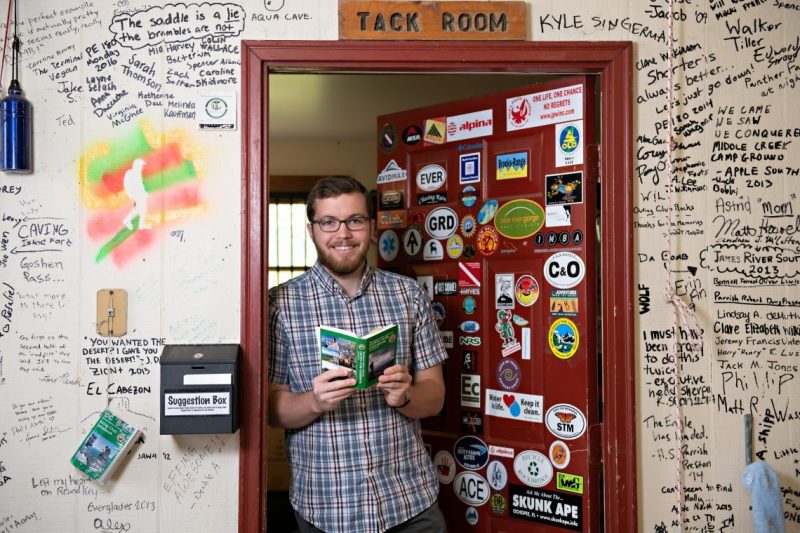 When Matthew Rickert ’18 grabs his diploma on May 24, he just may be clutching an additional prize as well — the brand-new revision of the beloved “Outing Club Guidebook,” which he edited. Said Rickert, “I’d like to have it in my hand as I’m crossing the stage at graduation.”

Rickert discovered the compact book with the green cover when he arrived on campus in 2013. Nick Tatar ’96 edited the book, which came out in 2001 and became an indispensable guide to the area. Rickert, a member of the Outing Club’s Key Staff, used it “as inspiration,” but soon discovered that some of the hikes described in the guidebook did not match their current configuration. For example, a user of the first edition would be dismayed to learn that the House Mountain parking area has moved about a mile away, or that the St. Mary’s Waterfall Trail has closed. Given that situation, “I figured that after 15 years, it might be time to update the guidebook,” said Rickert.

He had the will, but it took a while to find a way. While pondering the substantial chunk of time that an update would consume, Rickert had an a-ha moment. As a public accounting major, he needed more credits than usual. “I was sitting there thinking, ‘This really needs to get done, but I don’t have the time to do it.’ And then I realized I could make it a class.”

To make the project legit — and to rack up four credits — he convinced the Department of Journalism and Mass Communications to take him under its wing for an independent study. Pam Luecke, the Reynolds Professor of Journalism, showed him the ropes of Associated Press style and walked him through the publishing process. Over in the Williams School, Steven Lind, assistant professor of business administration, dispensed advice about design features that might look snappy, but would increase the cost.

Rickert also roped in Amy Balfour ’89, ’93L, a Lexington resident who writes for the Lonely Planet travel guidebooks. “She helped us figure out how a guidebook is typically set up,” he said. “She was a big help.” James Dick, director of outdoor education and recreation, provided his usual invaluable assistance, and several current students contributed new material. The W&L Communications and Public Affairs staff handled final production.

Rickert started the update late in his sophomore year, and he finished his work last September. The book is not set in stone, though. In 15 years, he mused, “hopefully someone else will come along and say, ‘Why didn’t they include this section of the James River in the paddling section?’ ”

The level of detail necessary for the update surprised him. When writing directions, he had to incorporate a number of methods, including driving to a location, using an odometer, and good old walking. “Google Maps helped,” he said. Rickert also mastered the graphic design software known as InDesign. “The learning curve was pretty tremendous,” he said, but after the first 100 pages, the way became clear.

It’s not like Rickert had nothing else to do these past few years. Among his many roles on campus, he served as captain of the Crux Climbing Team, as president of Alpha Phi Omega service fraternity, as chief of the Compost Crew, and as events director of the Venture Club.

And there’s also his second major, in history. That discipline gave him “the capacity to write well,” he said. “Being able to get across these nuanced points is something that is different in history, and in a guidebook, it’s also something that you’re having to work on.” A class on Civil War battlefields with Barton Myers, associate professor of history, required him to corral a complex set of information.

His other major, public accounting, gave him the ability “to synthesize a lot of data very quickly,” and his new profession, auditing, requires the ability to examine a massive amount of information for accuracy, flow and sense. “And that’s exactly what a guidebook is,” he found.

While the lengthy hike to publication has been frustrating at times, Rickert is proud that he’s made every trip in the book. “I also like the idea of having my name in the guidebook,” he admitted. “It’s a little bit of a token accomplishment. A legacy, if you will.”

The “Outing Club Guidebook” is currently available for purchase at the Washington and Lee University Store and at Walkabout Outfitters and Books & Co. in downtown Lexington.