Up and Running Molly Mann '20 combined fitness and service learning during her Shepherd summer internship at Back on My Feet in Washington, D.C. 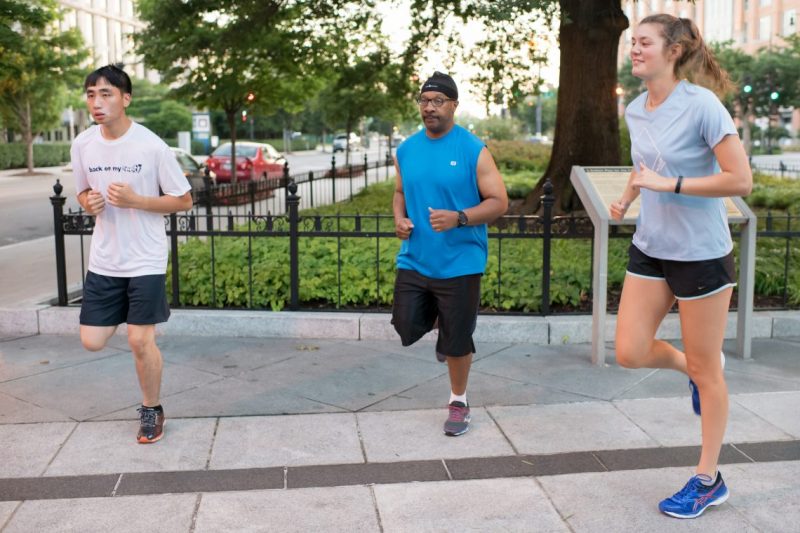 Molly Mann ’20 warms up with members of Back on My Feet before joining them for a run.

“It was so worth it to have made a direct impact on even one individual through that experience.”

A couple times a week this past summer, Molly Mann ’20 set her alarm clock for 4:45 a.m. to meet her running group. They were mostly 30- to 60-year-old men in the Washington, D.C., area experiencing homelessness due to addiction or incarceration. “These are the ones,” she said, “who don’t get as much attention from all the nonprofits set up to deal with underserved populations.”

As a Shepherd intern, Mann worked for Back on My Feet (BoMF), a program that addresses homelessness through a running-based model of empowerment. Her mentor at the organization was Lainey Johnson ’16, who has been with the program for just over six months.

Mann, an accounting major who is minoring in poverty studies, plays varsity basketball for W&L and is also a runner. “When I saw the posting for this internship, I was excited about the opportunity to be active and useful at the same time,” she said. “I’m passionate about working alongside individuals experiencing homelessness, so this program seemed like the perfect fit.”

BoMF has offices in 12 major cities throughout the U.S., and the D.C. area is home to three geographically located teams. The D.C. chapter recruits members from treatment programs and residential facilities and invites them to run three days a week. After a month, members who have attended 90 percent of the runs earn the opportunity to move into the second phase of the program, called Next Steps, which provides educational support, job training programs, financial literacy classes, employment partnership referrals and housing resources. 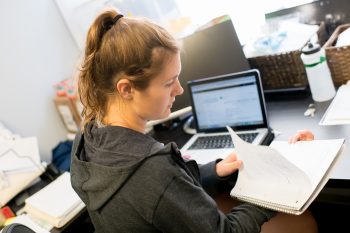 Unlike many of her peers in the Shepherd Consortium who worked directly with their target populations, Mann’s internship was more behind-the-scenes. “This internship was different from what I initially anticipated,” she said. “I spent a lot more time in the office doing background work, and I learned how BoMF breaks down barriers to help each individual meet his or her personal long-term goals.”

When Mann laced up her running shoes for those early morning meet-ups, she didn’t necessarily expect to get an aerobic workout. Once a month, she and Johnson held an orientation session for new members, which involved a lot of paperwork but no exercise. The other days, Mann might run with a member, but she went at that person’s pace and preferred distance. “Some people ran a one-, two- or three-mile route or walked it. The rules are that no one runs alone,” Mann explained. “We meet people where they are. The saying around BoMF is, ‘We’re into fitness, but we’re not a gym.’”

During her internship, Mann focused on the topic of addiction and what it meant for this group. She discovered that members’ descent into addiction and their approach to reclaiming their lives were all different. “Some became alcoholics from drinking one glass of wine or had become addicted to opioids after having surgery. Nobody’s story was the same. Everyone had come from a different place and wanted to go to different places, and BoMF was a stop on their journey.”

Mann noted, “It was eye-opening to realize that the pathway that brought them to this point in their lives was not formulaic — it didn’t happen because they lacked the resources during their childhood or were exposed to drugs throughout their lives. It was interesting for me to think about it from a public policy perspective and see that one single bill can’t address this one problem of addiction. The underlying issues are too complex.”

It takes a lot of dedication to consistently show up for a run when it’s hot or cold or dark or raining, but that’s the discipline BoMF members learn to embrace: What you get out of anything in life depends on the effort you invest.

Mann herself was tested at one of the monthly 5Ks the organization puts on. “It had been pouring all day and was freezing cold,” she said. “I spent most of the day hoping the event would be canceled. But it wasn’t, so I showed up in kind of a bad mood and thinking I wouldn’t run.”

However, a few of the members urged her to go the distance and she ended up running alongside BoMF member Travis. “He grinned from ear to ear the entire race, even though the rain was pelting us in the eyes,” Mann said. “It was his first 5K, and he said he didn’t know he could be this happy from finishing a race, accomplishing his goals and receiving recognition for his hard work. It was so worth it to have made a direct impact on even one individual through that experience.”