Washington and Lee Graduates 421 Students at 232nd Commencement In his Commencement address, President Dudley described the multitude of ways in which the Class of 2019's W&L education has prepared them for a lifetime of learning, leadership and service. 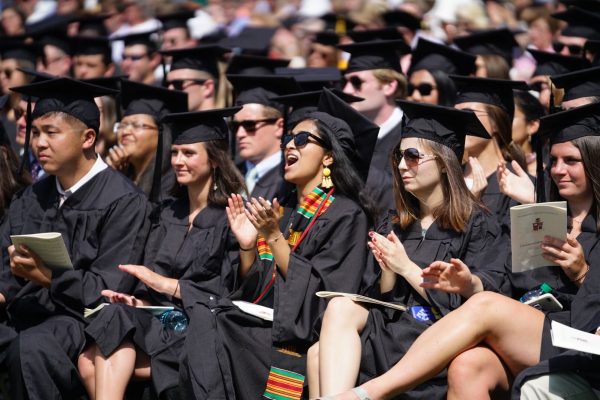 Graduating seniors at Washington and Lee University on Thursday were reminded of the value of the liberal arts, as President William C. Dudley described the multitude of ways in which their W&L education has prepared them for a lifetime of learning, leadership and service.

Dudley asked the 421 members of the Class of 2019 to reflect on why they came to Washington and Lee and also to reflect on the university’s purpose, reminding them of W&L’s mission. 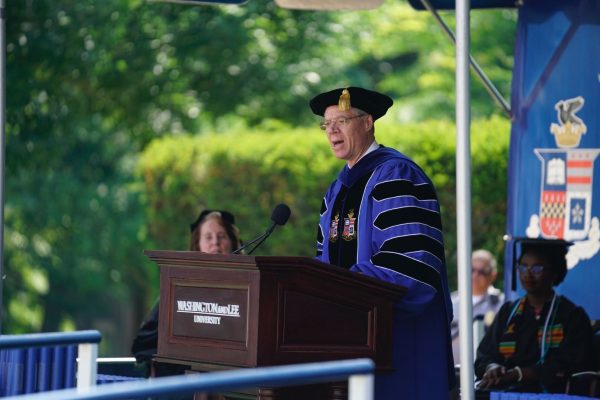 “Our mission statement has a beautifully simple logic,” he said. “The first sentence stresses the investment W&L makes in you. We provide a liberal arts education that develops your intellect and character. The second sentence stresses what is now expected of you. You have been prepared to learn, to lead, and to serve. You may not have studied leadership or citizenship. But if we have done our jobs, and you have done yours, you are ready to make significant contributions wherever you go, for the benefit of yourselves and your families, but also for the benefit of those less fortunate and the communities in which you live. By investing in you, W&L has made a long-term investment in the public good.”

“Liberal arts education is not job training, but it is the best possible professional preparation, especially for a world in rapid flux,” Dudley continued. “Responsible leadership is demanding. Fortunately, liberal arts education has furnished you with the habits of mind that characterize good leaders. You have been trained to observe closely, interpret judiciously, and reason carefully. You have practiced inhabiting the perspectives of those different from yourself, evaluating complex problems from all angles, and presenting conclusions persuasively. You have developed the stamina to work in solitude and the disposition to collaborate with others.”

“Liberal arts education cannot possibly prepare you in advance for everything you will encounter,” Dudley said, “but it makes you the kind of person who responds well to encounters for which you are not prepared. That ability, more than anything else, enhances your prospects for a lifetime of learning, achievement, leadership, service, and citizenship.”

Elizabeth Mugo, a sociology and anthropology double major from Ruiru, Kenya, and Irmo, South Carolina, spoke on behalf of the Class of 2019. Mugo was a member of the Executive Committee of the student body for two years, serving as vice president and then as the university’s first black woman president of the student body. In her remarks, Mugo asked her classmates to remember all they’ve learned at Washington and Lee and to consider their impact on the university. 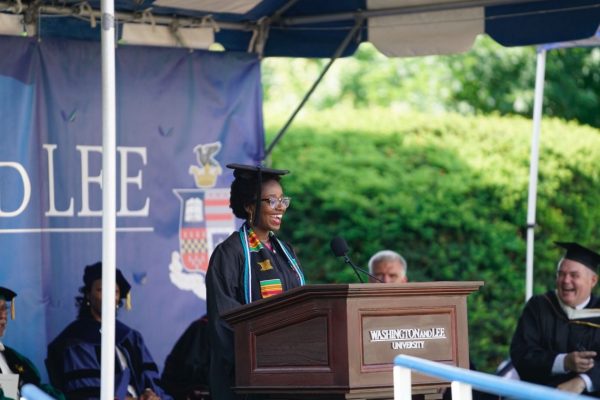 “These past four years have been some of the best, but also some of the hardest,” she said. “I’ve often found myself wondering if I, a first-generation migrant, first-generation American college student, and woman of color, was meant to be here. I’ve questioned the pace of the steps toward change that our university has made and what it really means to manage the plurality of our history with the inclusion of our whole community.”

“I don’t want to dampen the celebratory mood of this day,” she continued. “Rather, I hope that it assures you all of your strength and resilience, that is only part of what has brought you here on this hot and sunny day. As you celebrate and think back on these days, I hope that you’ll embrace the successes and the struggles that made us the people that we are in this very moment…I also hope that in the coming months, as we spread out across the country and the globe, that you’ll remember all that you learned here at Washington and Lee and consider the impact you’ve made here. I like to think that this place is a little bit better because we were here, and the people we were as first-year students would be proud of the people we’ve become today.”

Osowski achieved a perfect 4.0 grade-point average while earning a B.S. with honors in art history and a double major in mathematics. She has a minor in Middle East/South Asia studies. She is a Johnson Scholaranda member of Phi Beta Kappa and was a recipient of its J. Brown Goehring Sophomore Award for the sophomore with the highest GPA.

She was also inducted into the Pi Mu Epsilon mathematics honor society as a sophomore. She won the Robinson Award in English Literature, History and Social Sciences, and the Gerard M. Doyon award for art historical writing.

She is devoted to cross-cultural engagement and earned W&L’s Certificate of International Immersion by traveling to 12 different countries on five continents. She spent extensive time conducting research in India and will return to that country after graduation on a Fulbright-Nehru research grant. After completing the Fulbright program, Osowski will pursue a master’s degree in South Asia studies at the University of Pennsylvania.

As a sophomore, Pupa was awarded both the James Holt Starling Scholarship for health professions and the James Keith Shillington Scholarship in organic chemistry. As a senior, she won both the James Jinkins Livesay Health Professions Award from W&L and the Physical Chemistry Undergrad Award from the American Chemical Society. She won the Robinson Award in Mathematics and Science, and the Mapleson Award.

Pupa has been a research scholar with Professor Fred LaRiviere’s Research Group since her first year. During the summer of 2018, she participated in the summer research trainee program at Mass General Hospital, where she determined novel biomarkers of ventilator-induced lung injury.

She has been a tutoring volunteer in the English for Speakers of Other Languages Program, participated in the W&L Pre-Health Club, and worked for four years in the Office of Student Affairs. Next year, Pupa will begin her studies for an M.D. degree at the Baylor College of Medicine.

The university awarded an honorary degree to Ted DeLaney ‘85, professor of history at Washington and Lee, who first joined the W&L community at the age of 19. 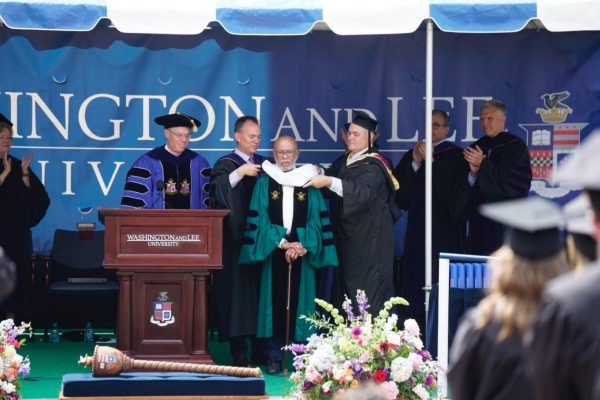 In presenting the degree to DeLaney, Provost and Jo and James Ballengee Professor of English Marc Conner celebrated him as a colleague, friend, neighbor and role model. “During 24 years on the Washington and Lee faculty, your impact has been extraordinary,” said Conner. “Your mentorship of students is legendary…Your colleagues have declared that you represent all that we value in higher education, and this University has been far better for your presence in our midst these past 56 years.”