Washington and Lee Graduates 444 Students at 234th Commencement The ceremony celebrated the conclusion of an unusual academic year.

Graduating seniors at Washington and Lee University on Thursday were offered some historical perspective on the 1918 and 2021 pandemics’ impact on the institution’s campus, and were lauded for their perseverance and resilience, as President William C. Dudley described the many ways their time at W&L, particularly during the pandemic, has prepared them for a lifetime of learning, leadership and service. 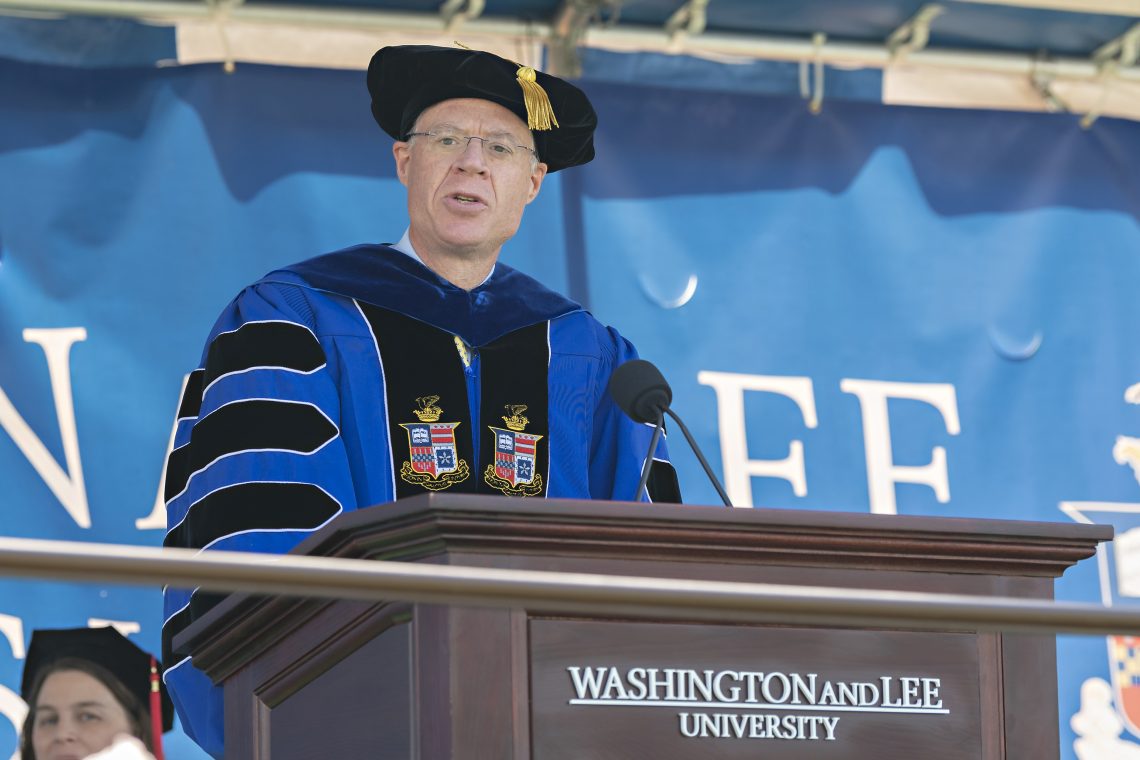 During the ceremony, held on Wilson Field – a first for the university – to accommodate pandemic-related distancing and gathering size guidelines, Dudley reflected on the unusual nature of the setting, and of the past year.

“We have never celebrated undergraduate Commencement on these grounds,” he said. “We have held this event in Lee Chapel, in the gymnasium, outside the president’s house, inside VMI’s Cameron Hall, and, beginning in 2003, on the lawn in front of the Colonnade. The fact that we are here on Wilson Field this morning is one more reminder of the many ways in which our lives have been disrupted by the pandemic. But the fact that we are here this morning is also a testament to your perseverance.

“The mission of Washington and Lee University includes preparing our graduates for ‘engaged citizenship in a global and diverse society,’” Dudley continued. “If we have succeeded, you will leave this place not merely prepared but downright eager to engage with the communities that await you. The flexibility cultivated by your liberal arts education, and strengthened by the demands of navigating the pandemic, will serve you well in these efforts.

“A liberal arts education, even at its best, cannot prepare you for everything you will encounter,” he said. “But it does make you the kind of person who responds well to encounters for which you are not prepared. Like a once-in-a-century pandemic. The ability to respond to the unexpected, which you have demonstrated in spades, enhances your prospects for a lifetime of learning, achievement, leadership, service, and citizenship.” 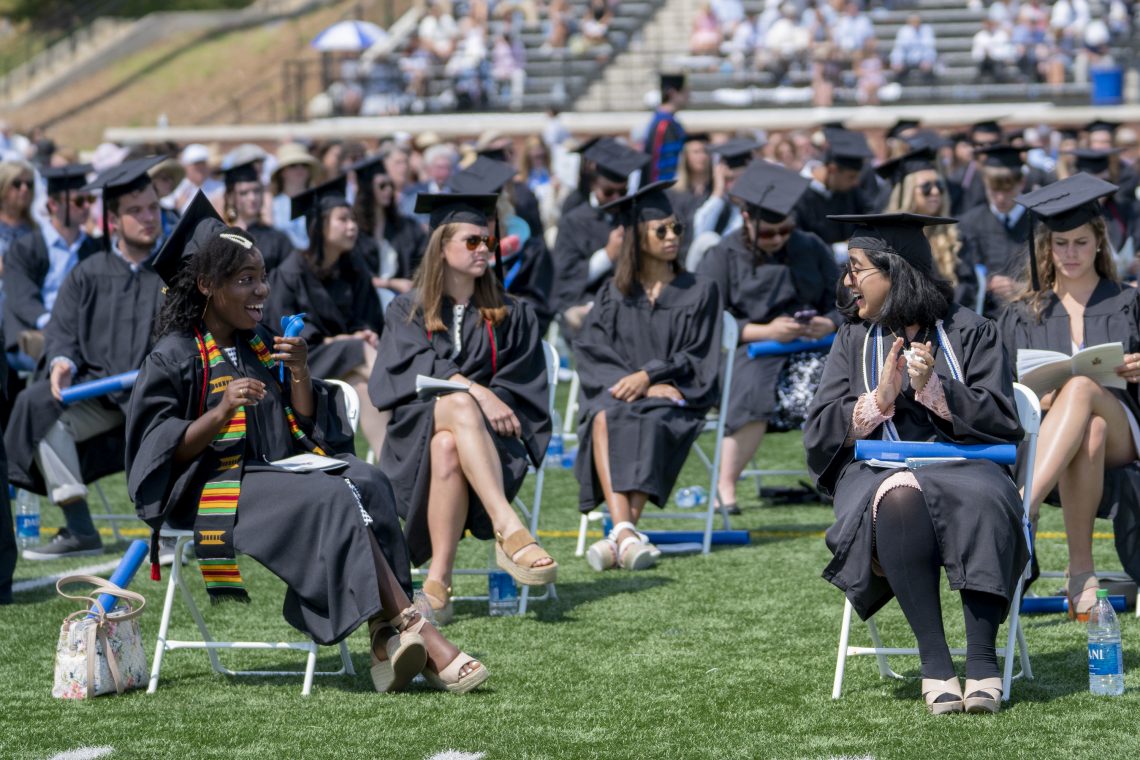 Chase Calhoun, a global politics major with a minor in Middle East and South Asia studies and Arabic, spoke on behalf of the Class of 2021. Calhoun, who is from Atlanta, was a member of the Executive Committee of the student body for three years, serving as class representative and then as president of the student body. He was a hearing adviser during the 2019-20 academic year, led three Appalachian Adventure trips, was a member of the Reformed University Fellowship leadership team, served as a medical specialist for the Mock Convention Operations Department, and has spent the past year volunteering as an emergency medical technician for the Lexington Fire Department. 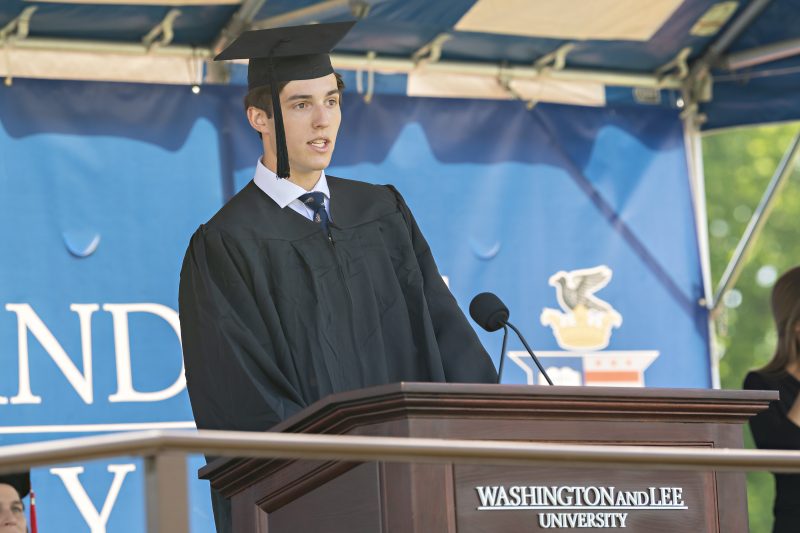 In his remarks, Calhoun both reflected on the challenges of the past year and expressed gratitude for his time at W&L.

“It would be easy to focus these remarks upon the dichotomy between the hardships of graduating college during a global pandemic and the bright futures ahead of each of us,” he said. “However, it would also dampen the purpose of this day of celebration and leave us all solemnly considering the past year. And the truth is, we have been fortunate in so many ways to have largely remained together in this beautiful valley learning from our professors and each other while preparing for our futures.

“Let us be thankful for the setting and community in which we have lived for these four years,” he continued. “The Lexington and Rockbridge County communities have accepted us and welcomed us. This community has served us and allowed us to serve it in so many ways. For all of this, I am thankful. Let us be grateful for all we have learned and those who have taught us and guided us.

Chi Shing Adrian Lam of Westfield, New Jersey, was named valedictorian. Lam earned a B.S. in biology with a double major in business administration. He is a Johnson Scholar and a member of Phi Beta Kappa and was a recipient of its J. Brown Goehring Award for the sophomore with the highest GPA.

Lam won the 2021 Business Administration Award for the senior with the highest cumulative GPA, the 2020 Biology Departmental Scholarship, the POLYED Undergraduate Award for Achievement in Organic Chemistry in 2019, and the James Holt Starling Scholarship selected by the Health Professions Advisory Committee in both 2019 and 2020.

Lam was president of the Tri-Beta National Biology Honor Society, served on the Contact Committee, and represented the Lambda Chi Alpha fraternity at nationals. As a two-year research fellow in biology, he participated in several projects in professors Toporikova and Ayoub’s spider lab, where he modeled spiders’ circadian rhythms.

During the summer of 2019, Lam used his Johnson Scholarship Enhancement Fund to launch a tuition-free summer program for at-risk youth in Toronto, Canada, where he was born. With his sister, Cynthia, a 2015 graduate of W&L, Lam was co-founder of the Breakthrough Leadership Academy in Hong Kong, which was established through a Davis Project for Peace grant to empower impoverished youth in Hong Kong’s poorest district.

Lam was named a Civic Fellow by the International Leadership Foundation in 2020 and joined 30 other students from around the country to prepare a white paper on issues related to COVID-19. He was one of eight finalists in the 2018 Stanford Longevity Design Challenge, a global pitch competition that encourages students to design products and services to improve well-being across the lifespan. Lam plans to serve others through a career in health care.

Also recognized during the Commencement ceremony was this year’s recipient of the Algernon Sydney Sullivan Award, Chase Isbell, of Amarillo, Texas. Isbell, an English major with minors in Women’s, Gender, and Sexuality Studies and Film and Visual Culture Studies, was selected by the faculty as the undergraduate senior who exhibits Sullivan’s qualities by excelling “in high ideals of living, in fine spiritual qualities, and in generous and disinterested service to others.”

Isbell served as editor-in-chief of the Vigil, as president of the Queer Liberation Alliance, as an LGBTQ+ peer counselor, and as a student reporting advisor. He served on the First-Generation Diversity Working Group, the Dean of Inclusion and Engagement Advisory Board, and as a leader of the Student Union.

Isbell has been inducted into both Omicron Delta Kappa and Phi Beta Kappa, and he has won the Community Catalyst Award twice, as well as the Frank J. Gilliam Award, the Sidney M.B. Coulling Prize in English, the Maxwell P. Wilkinson Scholarship in English, and the George A. Mahan Prize for Creative Writing in Poetry. During the summer of 2019, Isbell was admitted to the US-UK Fulbright Summer Institute at the University of Bristol in England. 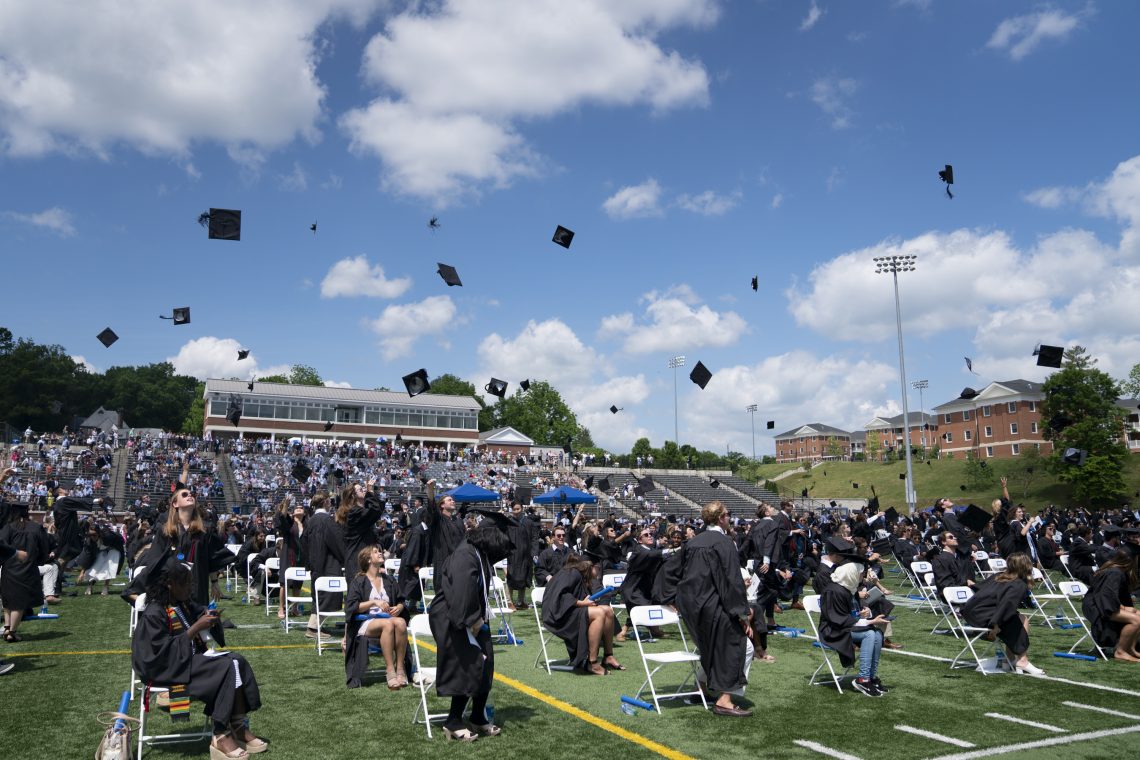 During the Commencement ceremony on Thursday, W&L also recognized 29 members of the faculty and staff who retired in 2020, and 38 who are retiring this year, who represent a total of more than 1,934 years of service.

Click here to see a full recording of the event. 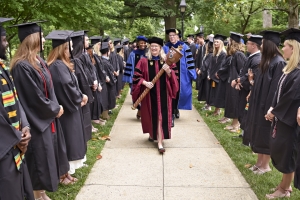