W&L Law’s Bruck Selected for Guantánamo’s 9/11 Trial Veteran capital defense attorney and clinical professor of law David Bruck will represent one of the men accused of plotting the Sept. 11 attacks. 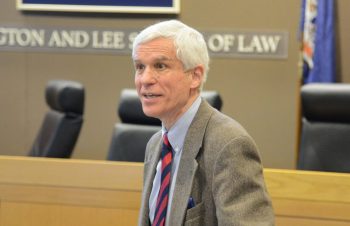 David I. Bruck, a clinical professor of law at Washington and Lee University School of Law and one of the nation’s leading death penalty defense lawyers, has been chosen to represent one of the men accused of plotting the Sept. 11 attacks.

As reported in the New York Times, Bruck will represent Ramzi bin al-Shibh, a Yemeni accused of organizing a cell of men based in Hamburg, Germany, who were among the 19 hijackers who seized four passenger planes for attacks on the World Trade Center and the Pentagon.

This is not the first time that Bruck has worked on a high-profile death penalty case. He represented Dylann S. Roof, who killed nine black churchgoers in South Carolina in June 2015, and along with Judy Clarke, represented Dzhokhar Tsarnaev, one of the brothers who carried out the Boston Marathon bombing in 2013. Bruck  also served as co-counsel for Susan Smith, who was convicted of drowning her two small children in South Carolina in 1995. Smith eventually received a life sentence.

In accepting the appointment, Bruck has announced his retirement from the W&L Law faculty at the end of the current academic year. Bruck joined W&L in 2004 after practicing criminal law in South Carolina for nearly thirty years, where he specialized in the defense of capital cases at the trial, appellate and post-conviction stages.

At W&L Law, he directs the Virginia Capital Case Clearinghouse (VC3), a clinical program that serves as a resource center for court-appointed defense counsel at the pretrial and trial stages of death penalty cases throughout Virginia. VC3 recently expanded its focus with a project to help Virginia inmates sentenced before the state abolished parole earn release from prison.