W&L Presents an Evening with Comedian Fortune Feimster The virtual Q&A is open to the W&L community. 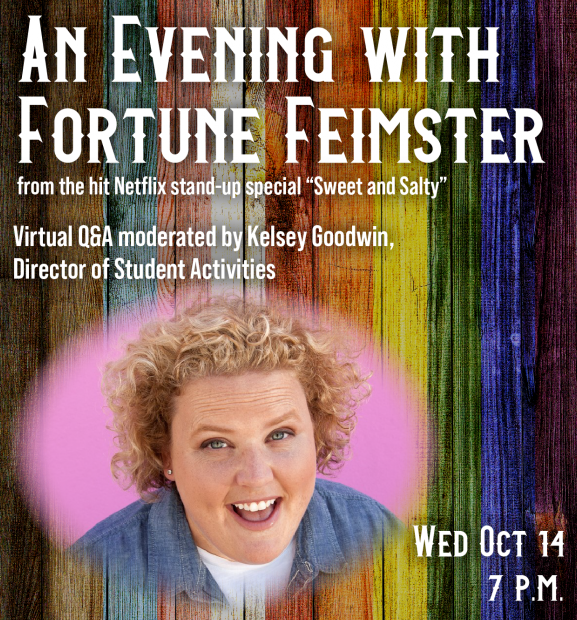 Washington and Lee University presents an evening with Fortune Feimster, stand-up comedian, writer and actor, on Oct. 14 at 7 p.m.

Kelsey Goodwin, director of Student Activities at W&L, will moderate the virtual Q&A. The conversation is open to all W&L community members, and students, faculty and staff can register to attend the talk for free here.

Feimster first became known as a writer and panelist on E!’s hit television show “Chelsea Lately,” then starred as a series regular on Hulu’s “The Mindy Project” and NBC’s “Champions.” She went on to make guest appearances on many other television shows, including “Claws,” “2 Broke Girls,” “Workaholics,” “Glee,” “Dear White People” and “Tales of the City.”

When not acting, Feimster tours the world doing stand-up comedy. She most recently released a one-hour special on Netflix called “Sweet & Salty.” She’s done late-night television sets on “Conan” and “Late Night with Seth Meyers,” and she has half-hour specials on Comedy Central and as part of Netflix’s season one of “The Standups.”

Feimster can currently be heard every morning on Sirius XM’s channel 93 for Netflix with Tom Papa. On their show, “What A Joke with Papa and Fortune,” they interview fellow comics and talk all things comedy. She also hosts a weekly podcast with her partner, Jax, called “Sincerely Fortune.” She can be seen regularly on David Spade’s nightly Comedy Central program “Lights Out,” and she appears on “RuPaul’s Drag Race” as a guest judge from time to time.

The event is sponsored by W&L’s Student Activities, the Office of Inclusion and Engagement, the LGBTQ Resource Center and Queer Liberation Alliance.