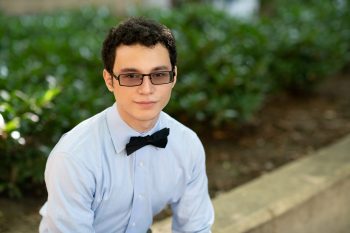 The performance will be streamed online at https://livestream.com/wlu. Tickets are not required.

On choosing his performance pieces, Gonzalez says, “The de Falla set is truly special to me not only because of my native Spanish language, but because the rhythms, harmonies and melodies remind me of back home. My father is a very talented guitar player, and as de Falla’s composing techniques capture the sounds and styles of the Spanish guitar, I can imagine my father playing beside me as I sing.”

At W&L, Gonzalez has participated in the Bluegrass Ensemble, Wind Ensemble, Glee Club and University Singers. Additionally, as part of the Choral Conducting Mentorship Program, he has directed several W&L Glee Club and Cantatrici rehearsals and performances and served as bass section leader in the University Singers for two years. His W&L experiences include an internship as a music teacher in Barcelona, Spain, and participation in Walden School’s Creative Musicians Retreat, in which two of his original works were performed and recorded.

“I’ve learned so much from all the musicians and mentors I have met throughout the years, and I am grateful for their unrelenting efforts to cultivate the potential they saw in me,” Gonzalez said.

Gonzalez volunteers to teach English for Speakers of Other Languages (ESOL) and works as a musician at a local church outside of school. After graduation, he plans to pursue a career in music education, become a choir director and find ways to help integrate the fields of psychology and music.

Gonzalez credits Shane Lynch, associate professor of music, as a mentor throughout his time at W&L.

“Dr. Shane Lynch has been one of my most inspirational and influential mentors here at W&L,” he said. “His genuine concern for cultivating the talents of us aspiring music educators truly motivated me to pursue a career in music education.”