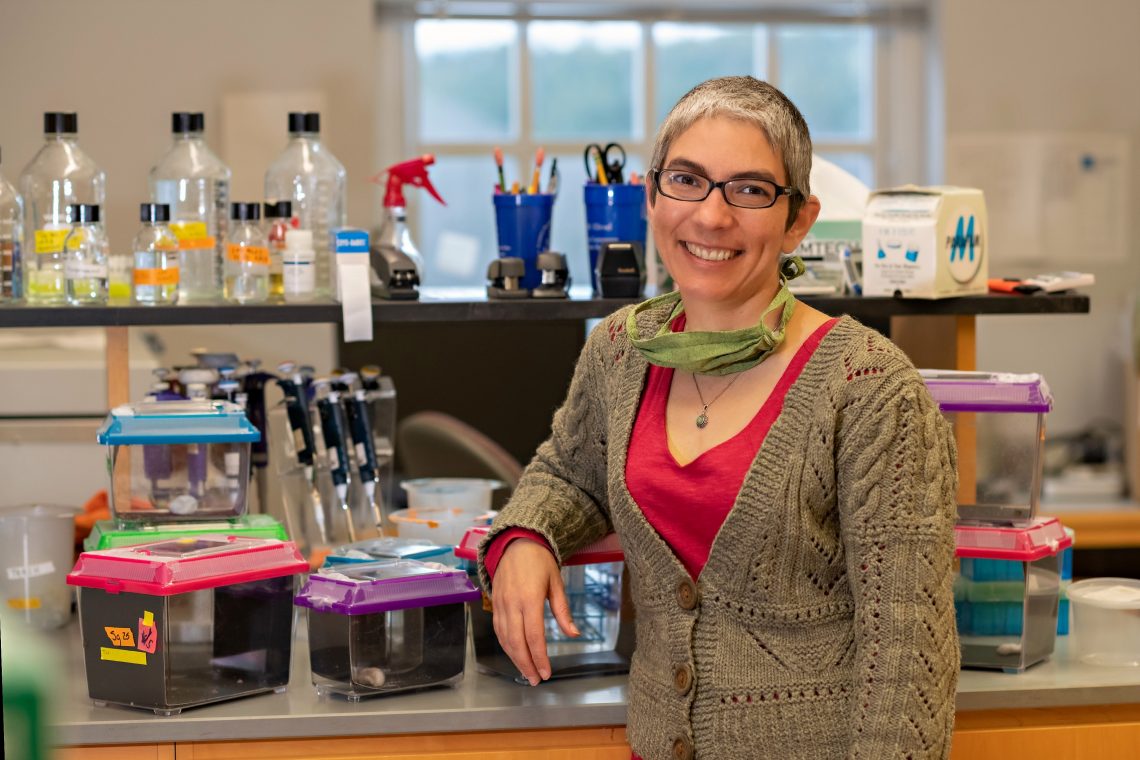 Nadia Ayoub, associate professor of biology at Washington and Lee University, collaborated with alumni and students to publish a research article in December in the open–access journal PLOS ONE titled “The common house spider, Parasteatoda tepidariorum, maintains silk gene expression on sub-optimal diet.”

Enkhbileg Dendev ’21, Merrina Lan ’22, Jannelle Vienneau-Hathaway ’16 and Jeremy Miller ’16 were part of her team, which studied the web-building properties of the arachnids over the span of several years.

The research began in 2014 when Miller became interested in the regulation of gene expression. Ayoub encouraged him to develop an experiment to test how house spiders changed gene expression in response to diet.

“It’s common knowledge that spiders are famous for their production of incredibly tough silk fibers,” said Ayoub. “These silk fibers are made of proteins and thus are encoded by genes in the spiders’ DNA. Despite genetic control of silk production, some species of spiders have silks that change material properties when exposed to different environments.”

Miller developed a proposal in Ianson’s class, Research Preparation in the Sciences, and implemented it in summer 2014-2015. In conjunction with Miller’s effort, Vienneau-Hathaway worked in Ayoub’s lab describing the gene sequences that encode dragline silk and prey-wrapping silk proteins in the house spider.

“While Jeremy was in charge of feeding trials and dissections, Jannelle designed the genetic experiments based on her gene sequences,” said Ayoub. “Jeremy and I performed dissections, and then Jeremy completed the remaining genetic experiments and the initial data analysis. The three of us wrote up the results before Jeremy and Jannelle graduated.”

In 2018, Ayoub submitted the article for publication in a science journal not related to PLOS ONE. It was rejected and required revisions.

“I was too busy to revise at that time, but then Enkhee Dendev started working in my lab in the spring of 2019,” Ayoub said. “She and Merrina Lan also took Research Preparation in the Sciences, and they were interested in the response of other types of spider silk to diet.”

Rather than having the students begin a new experiment, Ayoub tasked them with responding to the failed submission’s reviewer comments. Dendev edited the text, and Lan reanalyzed the gene expression levels and made figures.

Dendev continued to work with Ayoub to address the reviewers’ comments, revising the manuscript and facilitating the article’s submission to PLOS ONE.

“This was an enriching experience, as I was able to improve my analytical writing skills and see how scientific papers get approval to be published,” said Dendev. “It’s so exciting to see the paper we worked on for a while finally get published.”

The entire article is accessible to read online for free here.