27th Mock Convention this Weekend at Washington and Lee W&L’s Mock Con, one of the most ambitious student political research projects in the country, this year aims to predict the Democratic Party’s presidential nominee. 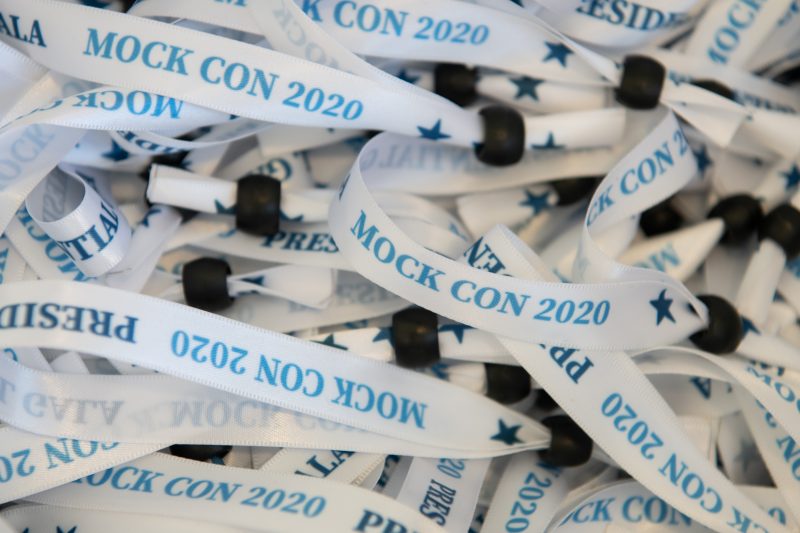 “Politics often divides people, but Mock Con is a chance for our whole community to come together.”

The most accurate and realistic mock presidential nominating convention in the nation will kick off for the 27th time this week at Washington and Lee University, continuing a 112-year tradition fueled by rigorous research and non-partisan student leadership.

As with previous conventions at W&L, which have taken place since 1908, the 27th Mock Convention will replicate the national convention of the party currently out of power in the White House. This year’s convention will simulate the Democratic National Convention, with the ultimate goal of accurately predicting the eventual Democratic presidential nominee. In the history of the event, W&L students have predicted the correct candidate with 77% accuracy, or 20 out of 26 times.

This year’s research project will begin on the evening of Thursday, Feb. 13, with a politics and media panel discussion in W&L’s Keller Theatre. Friday’s schedule will start with the 2020 Parade, with state delegations processing down Lexington’s Main Street on state-themed floats. For the remainder of Friday and Saturday, convention sessions will be held in the Duchossois Tennis Center on the W&L campus. On Saturday evening, organizers will hold a final roll call before announcing the final prediction.

The media panel and all four sessions will feature an impressive lineup of speakers, from Joe Biden campaign advisor Symone Sanders to “The Daily Show” host Trevor Noah. (See sidebar for the complete schedule and speaker list.) All events are sold out, but they will be livestreamed at https://www.mockconvention.com/livestream.

For this entirely student-led event, more than 1,600 students from W&L’s total undergraduate body of about 1,850 are involved as delegates, volunteers or members of the leadership team. Core members of the Mock Con team, many of whom are seniors, secured their positions early in their academic careers at W&L and have been preparing for Mock Con 2020 ever since. 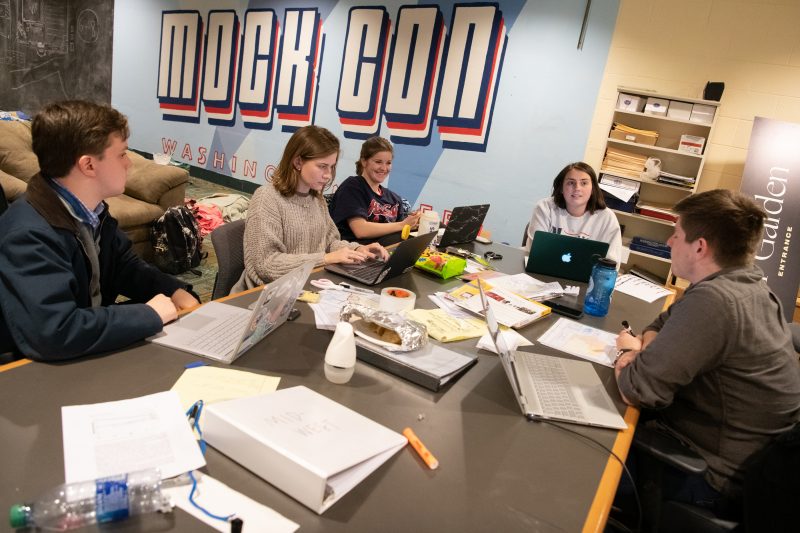 In pursuit of accuracy, the Political Department has employed a three-pronged approach that they call the “Trident Strategy.” This strategy includes a national approach, which involves surveying national trends and considering them in historical context; a local approach, with seven regional chairs shepherding 57 state chairs and their delegations in an on-the-ground research effort; and a metadata approach, which considers a number of data points, including demographic trends and campaign stop attendance.

“Maintaining Mock Con’s legacy of accuracy during the largest primary in the history of either party is no small task,” said Democratic Party Analyst Luke Basham ’20. “However, I am fully confident that, with our holistic research methods and exceptional team, we will ultimately make the correct prediction.”

No matter their personal political leanings, members of the Mock Con leadership team always remain united behind their work and the common goal to put on a realistic convention and accurately predict the nominee. This cycle is no different.

“This argumentative team has gotten incredibly close,” said National Political Analyst Kyle Perel ’20. “I think a large reason for this is because we have actively fostered discussion and dissension from day one. We have left our egos and personal ideologies at the door, and that is why this team functions as well as it does.”

But forecasting the eventual nominee is just one part of putting on a successful convention. The team works tirelessly to create the most realistic convention atmosphere possible, following the Democratic Party’s rules for its upcoming national convention in Milwaukee. Students also create a meticulously researched mock platform that predicts what they think the Democratic Party will focus on during the presidential campaign.

Students in the General, Financial, Operations and Communications departments handle a multitude of tasks that include everything from fundraising and managing a $1 million budget to making sure bathrooms at the convention site are clearly marked. When they haven’t been eating, sleeping or keeping up with their rigorous academic and extracurricular schedules, these students have been meeting with memorabilia vendors, talking with alumni and parents across the country, recruiting big-name speakers, handling both local and national media, and much more.

For the 2020 cycle, the Mock Con leadership team made a commitment to sustainability as part of the overall mission. For its “Blue Meets Green” effort, the team hired two W&L students to build an app that will make convention weekend a paperless affair. The app, which was designed for use with iPhone and Android, handles program information, ticketing and photo sharing and eliminates thousands of pages of full programs and other printed materials. 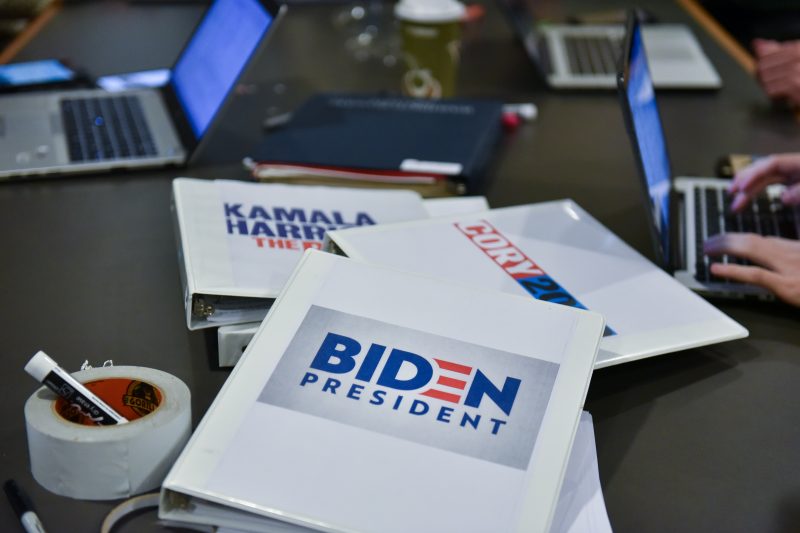 A meeting of the Mock Con minds. Photo by David Gálvez ’22.

The Mock Con experience makes students adept at planning and putting out fires. Some of their biggest challenges stemmed from the fact that the Richard L. Duchossois Center for Athletics and Recreation is still under construction, so Mock Con 2020 has to be held in a smaller space. This cycle’s team has handled those issues with aplomb.

“Mock Convention takes up a lot of time. We liken it to a four-year startup run by a bunch of 21-year olds,” said Communications Director Annie Lentz ‘20. “But at the end of the day, you make time for your passions and for what matters to you. And in that regard, Mock Con has taught me how to manage time and responsibilities to achieve a goal.”

Mock Con 2020 Political Chair John Harashinski ‘20 agreed. “The invaluable lessons I have learned from Mock Con, both in political analysis and leadership, will undoubtedly carry with me into my future endeavors, whatever they may be.”

Visit this timeline to read about the 112-year history of W&L’s Mock Convention.