A Picture-Perfect College Experience Ellen Kanzinger '18 provides a snapshot of the many opportunities she had to hone her photography skills at Washington and Lee. 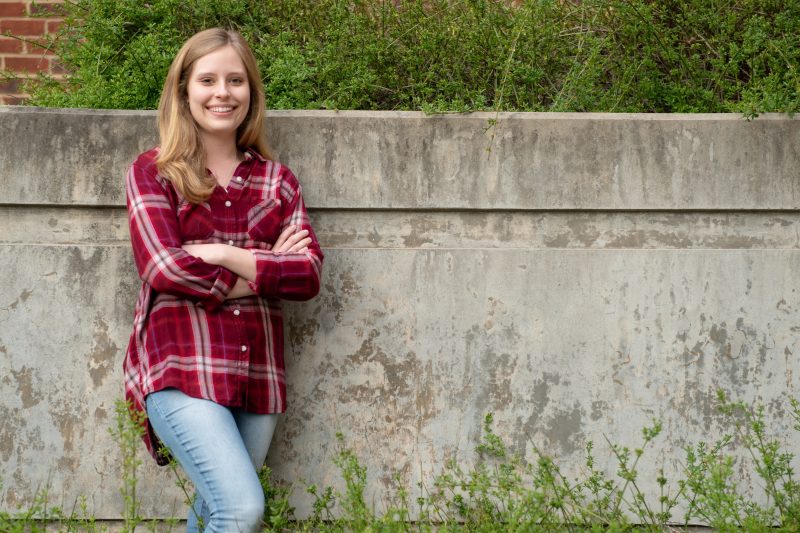 “I cannot describe the excitement I felt after developing my first roll of film…when I saw the fully developed negatives, I knew I wanted to work with film as much as possible.”

When I was looking at colleges, I knew I wanted someplace with a darkroom. I started working with a digital camera my freshman year of high school, but never had a chance to work with film. I planned to pursue a career in photography and was looking to expand my knowledge of its many different forms.

Many of the schools I visited had transitioned their photography programs into digital-only. Washington and Lee was one of the few liberal arts universities I looked at that still had a darkroom — two, in fact.

The basement of Wilson Hall is a second home to me. Throughout my four years, I have spent countless late nights in the darkroom and computer lab tweaking and printing photos for critiques. On many mornings, I woke up early to mix chemicals and clean the darkrooms as part of my work study.

One of the very first classes I took at W&L was a black-and-white film photography class. I cannot describe the excitement I felt after developing my first roll of film. There are so many points in the process where I could have messed up the film by accidentally letting light in or not fixing the image properly. But when I saw the fully developed negatives, I knew I wanted to work with film as much as possible.

A roll of 35mm film, which typically holds 24-36 photos, is expensive compared to an SD card, which can hold thousands of photos. I would not have been able to experiment with the various types of film and cameras without the support of my advisor, Professor Christa Bowden, and the university. Over my four years, I worked with 35mm, medium-format and large-format cameras. I traveled to France my freshman year for the Spring Term class Photography and the City of Paris.

For Spring Term the following year, I took Antique Photo Processes with Professor Bowden. We created our own light-sensitive paper and used the sun to make exposures. We created prints from negatives using various processes including cyanotypes, platinum and palladium, kallitypes, and wet plate collodion. This is not something I would have been able to do on my own.

When it came time to think about my senior thesis, I knew that I wanted to work with film. For me, film photography is a process of slowing down and treasuring each press of the shutter. This methodology played into my thesis as I interviewed my family about a very personal topic and asked them to sit in front of my camera. Knowing that film is a much harder medium to work with outside of the university, it was a special opportunity in my final year.

W&L provided me with many other opportunities to hone my craft outside of the classroom. I attended the Society for Photographic Education conference with my advisor the last four years. I shared my work with professional photographers and professors at the conference during the portfolio critiques. As someone who dislikes sharing her work (not a great quality when you’re looking for a job), this was one of the most terrifying but rewarding experiences I have had during college.

Additionally, I began working with University Photographer Kevin Remington to capture student life on campus. Through this work study, I gained experience in photographing candid moments between students and faculty around campus. My exposure to the many forms of photography, both in class and around the world, has shaped my process as I pursue a career in photojournalism.

Professors Christa Bowden and Pam Luecke. They are my advisers, and they are phenomenal women who have really helped me grow during my time at W&L. Also, Dean Rodocker and Amy Perkins for all of the support and time they give to the ResLife program.

Fondue is just cheese and bread, my friend.

Hands down, Napa Thai. Everything on their menu is amazing but their pad see ew is my favorite.

What one film or book do you recommend to everyone?

The film “Miracle” never fails to give me chills.

No idea and I’m trying not to freak out about it yet.

ResLife Training. We are on-the-go from about 9 a.m. to 9 p.m., but we have an amazing staff and everyone bonds throughout the week and a half.

The first concert I ever went to was “High School Musical: The Concert.”

Where can we see more of your photography?

My personal portfolio is at ellenmkanzinger.com.