Finding Beauty Behind Bars After taking a course at Augusta Correctional Center, two W&L juniors helped to organize an exhibition at the university featuring artwork by artists who are incarcerated. The exhibit is entitled “Unfreedom of Expression.”

During a Spring Term 2017 course held at Augusta Correctional Center (ACC), Washington and Lee University students Laura Calhoun ’20 and Balen Essak ’20 admired some elaborate doodling on a textbook owned by one of their classmates from ACC.

“That’s nothing close to the best art you’ll find here,” he told them. “There are some incredible artists at Augusta.”

After seeing more examples, which ranged from detailed pencil drawings to papier-mache figurines fashioned out of toilet tissue rolls, Calhoun and Essak were astonished. That day, as they drove home to Lexington, they began to wonder what it would take to bring that amazing artwork out of the prison and into the galleries of W&L.

More than a year later, with support from both the correctional facility and multiple departments at W&L, a new exhibit has opened in Wilson Hall’s Lykes Atrium and hallway galleries. “The Unfreedom of Expression: Artworks from the Augusta Correctional Center” features the work of 18 men who are incarcerated or were formerly incarcerated, and will be on display through Sept. 30. A panel discussion and reception will take place on Sept. 13 at 5 p.m. in Wilson Hall Room 2017. Both the panel discussion and reception are free and open to the public.

For everyone involved in the project, this show is a chance to share with the wider community what W&L students have been learning through their interactions with residents at Augusta.

“We saw through our class that the people who are incarcerated are people with real feelings and emotions,” Essak said. “But on the outside, when people think of a prisoner they think of people who are violent and inhuman. That is the stigma we are trying to tear down. They are more than one action that they may or may not have done at some point in their life.”

Washington and Lee’s relationship with ACC began in 2015, when Kelly Brotzman ’95, then a visiting assistant professor in W&L’s Shepherd Program for the Interdisciplinary Study of Poverty and Human Capability, taught a Spring Term class at ACC called “Incarceration and Inequality.” The course, which was the first of its kind in Virginia, was taught three times a week to nine W&L students and 10 inmates.

For Spring Terms 2016 and 2017, Brotzman used the same model to teach courses at ACC called “Freedom and Unfreedom” and “Profit and Punishment.” Calhoun and Essak were students in the 2017 course.

One year after they had the initial idea for the art show, Calhoun and Essak began to work with W&L’s Tammi Hellwig, director of Community-Based Learning; Clover Archer, director of Staniar Gallery; and Howard Pickett and Fran Elrod, director and associate director of the Shepherd Program. On ACC’s end, the project was enthusiastically supported by Warden John Woodson and Regional Principal Darlene Maddy.

Calhoun and Essak wrote a proposal for funding from the Roger Mudd Center for Ethics at W&L, which is hosting a 2018-19 speaker and discussion series on the “Ethics of Identity.” In their proposal, Calhoun and Essak wrote: “One of the central questions of this year’s Mudd series theme is: ‘Can we choose our identities, or are our identities given to, or imposed upon, us?’ In the case of incarcerated individuals, this question becomes especially poignant.” The Mudd Center generously supported the collaboration, with additional funding from the Shepherd Program, the Office of Community-Based Learning and the Provost’s Office.

After lining up all of that support, it was finally time to pick up the artwork from ACC. In late August, Essak and Calhoun traveled with Archer, Pickett and representatives from the Office of Community-Based Learning to retrieve the pieces. It wasn’t until they had possession of the art that Calhoun felt as if the show would really happen.

“I don’t know that one word can describe that feeling,” she said. “It was like a combination of elation and relief and hope.”

Archer, who has curated dozens of exhibitions at W&L, said she was delighted by both the number of pieces offered for display and the level of technical skill they evidence.

“This art was made without any expensive or sophisticated art supplies or classes or formal training,” she said, “yet the level of expression is just sensational and the technical skills are amazing.” 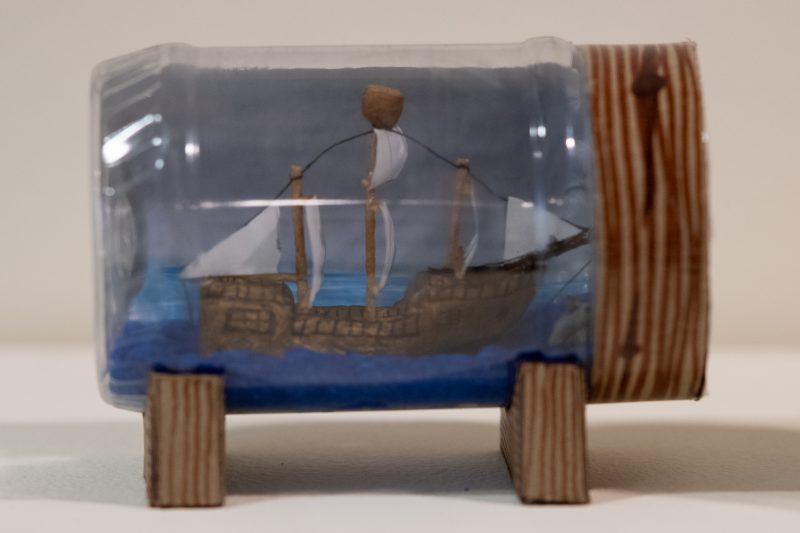 A ship in a peanut butter jar by Gary Wilkinson

Inside a clean peanut-butter jar is a tiny ship flanked by two miniscule dolphins, all floating on an indigo sea — and all made from the pulp of wetted toilet paper rolls. No less impressive are the handkerchiefs made from bed sheets or the fist-sized white skull, which was carved from two bars of soap using a pen cap.

The materials and tools used to create the art in “The Unfreedom of Expression” lend much to the exhibition’s overall meaning. While the students who study art in Washington and Lee’s Lenfest Center have access to some of the best art supplies money can buy, residents at Augusta have far fewer resources. For example, the watercolors used to paint the image of a ruby-throated hummingbird may have been fashioned from an item such as liquid paper mixed with marker ink. These kinds of methods speak to what Archer called “the risk and the sacrifices they make in order to have an outlet for expression.”

“We’ve had work by untrained artists and artists who come from a very different experience than our students,” Archer said, “but this is probably one of the most intensely powerful exhibitions we’ve had because I feel like our students are so far removed from this experience.” 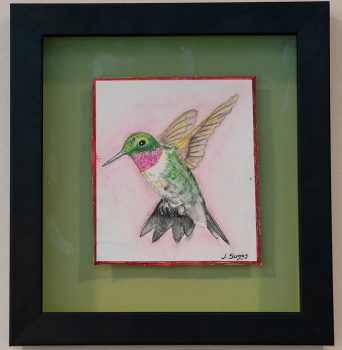 “The Spirit of Laura” by Jeffrey Suggs was painted in honor of Laura Calhoun ’20, one of the students who helped make the exhibit a reality.

She hopes the work will inspire rich conversations among W&L students. A guestbook set up at the site of the exhibition will record visitor thoughts that can then be shared with the contributing artists at ACC.

This pattern of W&L students learning from ACC residents, and vice versa, is one that has been exceedingly successful since Brotzman taught that first class at the correctional facility. This year, Pickett, the director of the Shepherd Program, taught a Spring Term course at ACC called “Martin Luther King Jr.: Justice, Love, and Forgiveness.” Some of the students in his class will have artwork in the show (one student even painted a portrait of Pickett).

Jeff Schatten, assistant professor of business administration, taught a seminar with a similar model at ACC in Spring 2017 and at Middle River Regional Jail in Spring 2018. Schatten’s course, entitled “Organizational Behavior: Leading Teams,” explored the interpersonal processes and psychological factors that affect the way individuals interact and engage with one another.

One of the goals of the Community-Based Learning Office in supporting an engaged course, Hellwig said, is to facilitate a reciprocal relationship. “The community voice is essential, which includes collaboratively identified learning objectives, clear and timely communications and a structure that enables students, community partners and faculty to design a mutually impactful partnership.”

“The collaboration with ACC has been outstanding,” Hellwig added. “The administration has been involved in every step of the project in a positive way. Principal Maddy thoughtfully considered the collective learning experience of the artists, W&L students and the community.”

Hellwig also noted that Archer spent countless hours curating the show, and that her contributions have made the exhibition even more impactful. “So much thought went into the way the exhibit is set up. The arrangement of the art, the design of the labels, and so many other details speak to the level of respect she has for these artists and their work,” she said.

Of course, nobody at W&L or ACC would have been involved in a project like this if not for the compassion and tenacity displayed by Essak and Calhoun as they strived for months to make their vision a reality. Most students who take seminar courses at detention facilities describe it as a transformative experience, Hellwig said, but these two students “made sure it wasn’t a fleeting transformation. They wanted to make something lasting.”

“Helping Laura and Balen realize their vision to showcase each artists’ voice, as well as their humanity, has been a humbling and moving experience,” Hellwig said.

Community-partnered seminar courses at detention facilities are often popular during registration, but that doesn’t mean they’re easy for any of the students. In addition to heavy reading loads and writing assignments, Pickett’s MLK Jr. class required each student to reckon with preconceived notions, as well as emotions like guilt and feelings of helplessness.

“The Unfreedom of Expression: Artworks from the Augusta Correctional Center”