Finding the Spice in Campus Life Becoming a part of the Outing Club at Washington and Lee completely changed Matt Richards's college experience. "My time with the Outing Club has without a doubt had the biggest impact on my time here," he said. 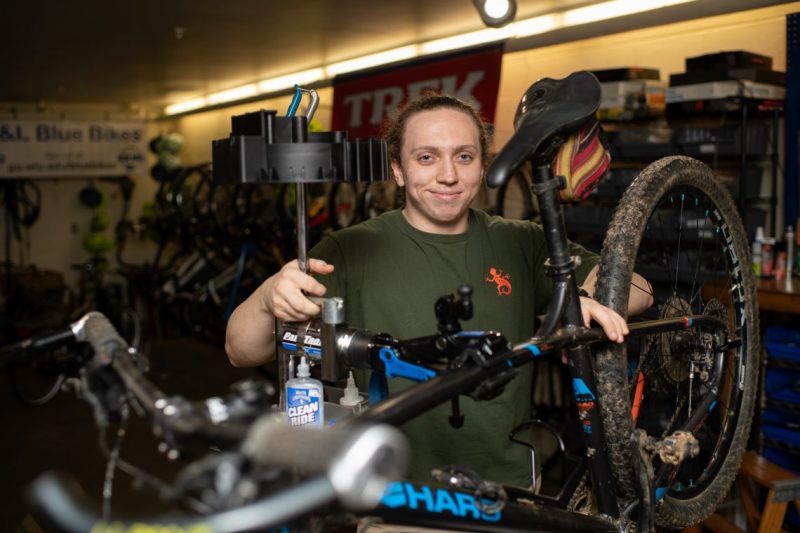 “I personally love to bike around town and also hit the trails, and I wanted to share that fun with others and hopefully build the foundations for a community here.”

The biggest factor was definitely my mom. We got a pamphlet in the mail one day that mentioned the honor system, and she was the one that showed me and first got me interested. A couple months later, we came to visit together and pretty much agreed on the spot that it was a great choice. The campus just felt very inviting and the few people I spoke to were so friendly that it was a clear decision.

Why did you decide to major in geology and Russian-area studies?

The geology here is super interesting, and I had an interest in the outdoors, so I decided to take an intro geology class my sophomore year. Obviously quite a bit of it went right over my head, but being able to explore in the county a bit and learn about the geology was fascinating. I figured it would be a good justification for playing around on rocks. The faculty were also incredible and helped spark my interest.

As for Russian, I took Spanish for a few years in high school and also took a Russian course at the local community college. I wanted to continue studying language, and hadn’t had many opportunities in high school to branch out in that respect. I met with my first-year adviser (Professor Anna Brodsky, the head of the Russian Department), who very easily swayed me to at least try out the language class. I was instantly hooked and knew by the end of freshman year that I wanted to major.

Have you had any opportunities during your time at W&L to practice those studies outside of regular coursework, such as an internship, summer research, or study abroad opportunity?

Not yet, but I will be going to Iceland this Spring Term for a regional geology course! I’m extremely excited for it.

How did you get involved with the Outing Club at W&L, and what impact has that involvement had on you and your time as a student here?

As a first-year student, I decided to go on the Everglades Kayaking Trip during February Break, which was my first introduction to the Outing Club. I was pretty nervous and didn’t have any friends on campus, so I wasn’t sure how it was going to go. The second night, after I ordered a hamburger with “spicy boom-boom sauce” at a fast food restaurant, Director of Outdoor Education and Recreation James Dick gave me my nickname, “Spicy,” which has stuck ever since and was a turning point in my time here. 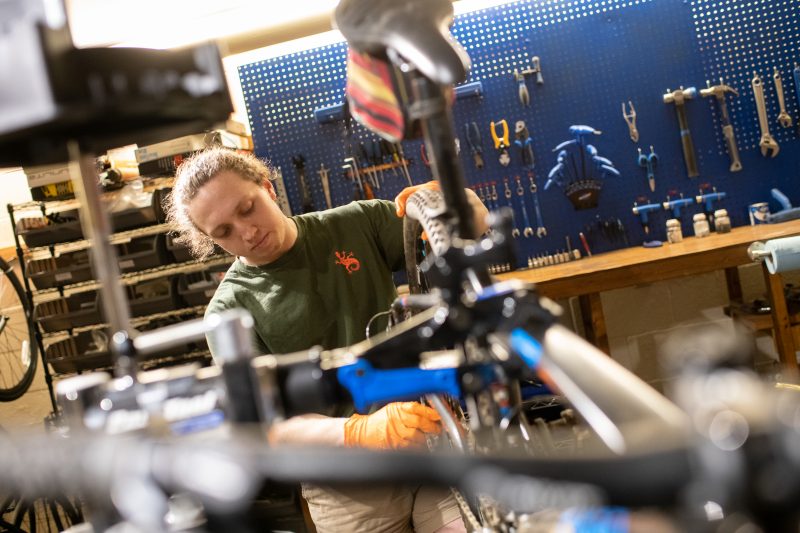 “It was really meaningful to put labor into something that I use so often and be able to see it put together,” said Matt Richards ’19 of working in the W&L Bike Shop.

Tell us about your work on the OC bouldering wall and the new bike shop inside Sustainability House.

I’ve been working at the barn and climbing on the wall for a while now, so when we planned to put together the wall expansion last year I was pumped to be a part of it. It was really meaningful to put labor into something that I use so often and be able to see it put together. Opening the bike shop was also exciting because it was a way to make biking here much more inclusive (both by being closer to campus and also having a much larger pool of resources). I personally love to bike around town and also hit the trails, and I wanted to share that fun with others and hopefully build the foundations for a community here. Being able to have a tangible impact on campus and expand the resources we have here made me really happy.

Has anyone on campus served as a mentor to you? How?

Both James Dick and Group Fitness Instructor Rolf Piranian have been huge mentors to me during my time here. Rolf was one of a few people who first taught me about bike repair, and during the summer practically taught me about mountain biking from scratch. He kick-started my love of biking. James has given me a lot of opportunities in the Outing Club and put an incredible amount of trust in me, and I am so thankful for that. They both not only taught me technical skills but also helped me to grow and become who I am now.

What would you say to a prospective W&L student who is deciding whether to apply or attend here?

I’d tell prospective students not to let the university’s “work hard, play hard” reputation intimidate them. There is a little something for everybody, and a crazy amount of resources for students, so don’t feel like a crazy difficult workload and party culture is all there is for your four years.

Where are you from?

Without a doubt, Mano Taco. I get three veggie burritos with no cheese like clockwork.

I’m a sucker for “The Hobbit.” I like to read it every year and I recommend it to everyone.

What do you wish you’d known before you came to campus?

Probably more about the prevalence of the Greek culture. You see the statistics and whatnot but it’s hard to convey what that means for a lot of incoming first-year students.

What’s your favorite outdoor experience within a day’s drive of W&L?

Devil’s Marbleyard is awesome because you can always do it a little bit differently each time you go, plus there’s a fantastic swimming hole to dip into during the summer months on the boulder field.

What’s the best piece of outdoor equipment/apparel you’ve ever owned?

Hammock for sure; there’s no bad time to string it up and hang out.

Well, most people just know me as Spice, so many probably wouldn’t know my actual name.