Finding Ways to Give Back Jerónimo Reyes '21 says he is so immensely grateful for the gifts in his life, including a QuestBridge scholarship to W&L, that he wants to become a doctor and devote his career to helping others. 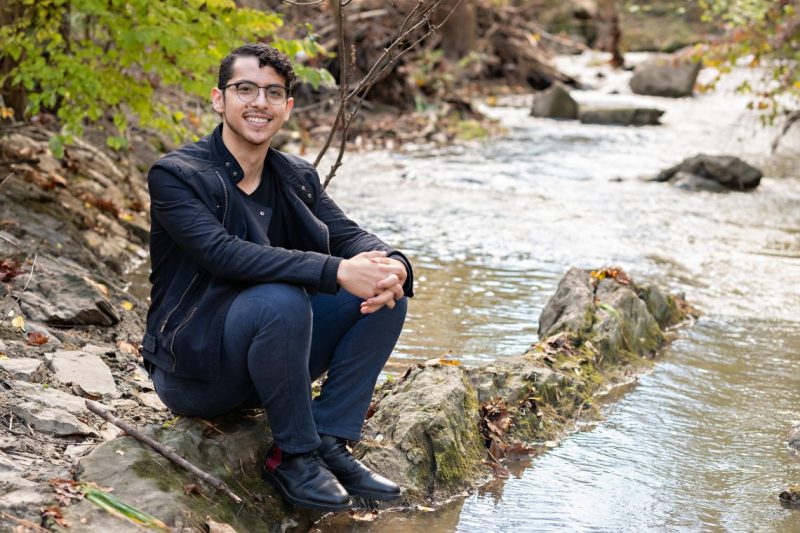 “Because of how indebted and appreciative I feel toward QuestBridge, I have done as much I have been able to for the W&L chapter in order to give back an inkling of all that was given me.”

Q: How did QuestBridge play a role in your decision to attend W&L, and how have you stayed involved in the QuestBridge program during your time in college?

In truth, QuestBridge is the only reason I was able to attend university in the first place. Being the youngest of three and from a low-income home, I knew that if I wanted to continue my education, I would have to fund it myself, so I placed all my hope on obtaining the QB scholarship. Throughout the application process, I was exposed to schools I had never even heard about before, with W&L among them, and I eagerly ranked as many as I could to increase my chances of matching to any of the college partners. I vividly remember the day that I opened up the final confirmation email after classes and I just sat there, completely stunned. It is no exaggeration to say that I owe everything I have now to QuestBridge and the opportunities it opened up to me at this school.

Because of how indebted and appreciative I feel toward QB, I have done as much I have been able to for the W&L chapter in order to give back an inkling of all that was given me. I became a part of the chapter’s executive board during my sophomore year as a head mentor, and took that mentorship and emotional connection philosophy into my junior and now senior years as the QB chapter president. It may be naïve of me, and it may come off as childish, but I have tried my best in my time as president to help all the chapter members find friends, especially the first-year students. For various reasons, W&L’s environment can be intimidating and overwhelming for its students, especially those in minority groups, which is something I personally experienced a lot as a first year. Due to this, I promised myself that I would do all I could to keep those that came after me from going through what I did. Misery may love company, but it sure has a hard time growing within a community, and that is why the chapter has been focused on building that sense of companionship, vulnerability, openness and, hopefully someday soon, family, to show the chapter members that they have a place and people here, and that they can pay it forward to those that come after them.

Q: You have incredibly diverse academic interests. Why did you decide to major in biology and art history with a minor in mathematics? What do you want to do after graduation?

The biology major came naturally to me, as I have always been fascinated by the delicate nature of life in all of its forms. To me, there is something indescribably beautiful about the cycle of life in this world, and I wanted to learn all I could about the inner workings of how living things behave, grow, interact, change and ultimately begin again.

The mathematics minor does not have nearly as poetic a motivation. It was originally meant to be a major and, if I am being completely honest, it was motivated in equal parts because I liked number manipulation and because I liked the idea of saying I was a “math magician” (mathematician). However, after I advanced far enough into the major, there were no more numbers, and the conceptual side of mathematics went completely over my head, so I decided to do what was best for my GPA and end at a math minor instead.

As for the art history major, it began as a minor in what I mistakenly assumed was an umbrella field of studio arts and art history. Serendipitously, I fell in love with art history, due in large part to the passion evident in that department and the way in which their individual teaching styles and research focuses lent so much life and dignity to the cultures they were sharing with us. As I am sure is readily apparent by now, I am quite an emotional person, and connected fully with the way in which art history is able to describe the intricacies of time periods and places through peoples’ emotional expressions through art within them.

All of these disparate interests combine in my passion and drive to become a medical doctor, namely a general practitioner, to be able to directly help as many people as possible, hopefully through Doctors Without Borders, the Peace Corps or the Red Cross. I dream to someday, decades from now, become the surgeon general and be able to mix health and politics to fight for the personal freedoms of those who are unjustly barred from their medical needs, especially women’s access to contraceptives and abortion, and LGBTQ people’s rights to professional, unbiased and empathetic care. 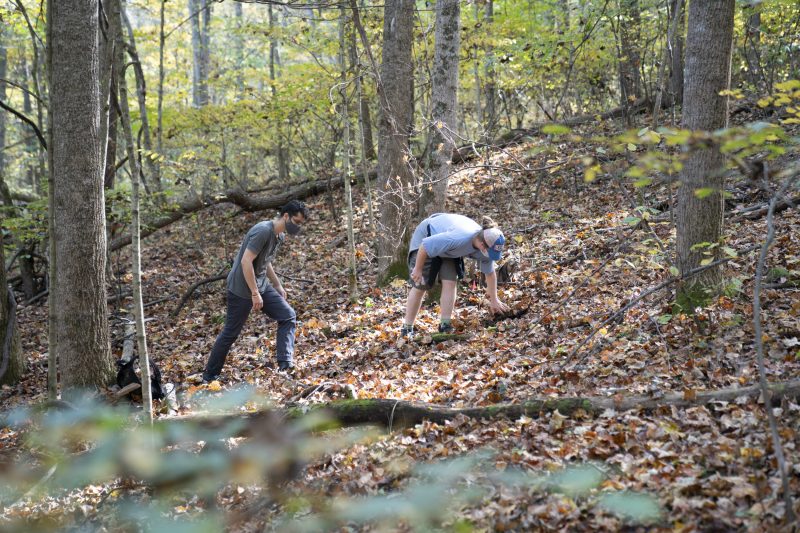 Jeronimo Reyes ’21 and James Eaton ’23 look for salamanders under tiles in the back campus woods as part of research for Biology 243: Animal Behavior.

Q: Why and how have you been involved in sustainability initiatives at W&L?

I have already described the wonder I have for the life cycle, and nothing captures it better in my eyes than growing a mighty tree from a miniscule seed. However, the time for individual appreciation of nature could soon draw to a close due to the apocalyptic consequences of climate change looming ever closer. I know that one person’s actions may not quell the coming fires or soothe the endless droughts, but one person’s inactions don’t do anything to stop them either. Because of this, I was eager to work alongside Kim Hodge and Nicole Poulin from the Office of Sustainability to do my part, however small, in making this school greener.

With them, I have been able to grow plant starts in the Science Building’s greenhouse, watch them grow in the Campus Garden, and see the literal fruits of our labor go to Dining Services and Campus Kitchen at W&L o feed the community that has taken me in. I have also been lucky enough to work on the Compost Crew, wherein we collect food waste from around campus and repurpose it as compost for the Campus Garden. Similarly, I have volunteered at Campus Kitchen’s cooking shifts to prepare the very ingredients that we grow out in the garden into delicious meals for the community.

Q: What does your role as a Diversity/First-Generation Working Group member entail?

The Diversity/First-Generation Working Group serves to maintain open channels of communication between the leaders of organizations on campus that dedicate themselves to diverse, first-generation and low-income student well-being. We meet monthly to share events that we are planning and to help inform the group of students each member has access to and programs that could benefit them. As such, my role ultimately comes down to not only sharing events that QuestBridge has planned, but also serving as a voice for the chapter’s members in general. It has certainly been humbling to be in a group with so many dedicated and brilliant leaders, whether they be faculty, staff or student, and to know that my drive and passion for community are mirrored by all the members of the DFGWG.

Q: What other opportunities at W&L have been meaningful to you? Why?

I touched upon Campus Kitchen briefly in a previous answer, but volunteering and leading at the kitchen have truly been some of the most rewarding experiences I have had at W&L. Given how lucky I was to be welcomed to this institution, I knew I had to find a way to give back to this community, and in learning of the wealth and food security disparities between the university and its surrounding area, I immediately signed on to help in any way I could. I have known food insecurity in my past, and Campus Kitchen gave me the opportunity to protect people in this community from experiencing that circumstance. Harvesting the ingredients for the meals and cooking them alongside fellow Campus Kitchen leaders and volunteers have brought me closer to the Rockbridge community and reminded me of how many inherently selfless and deeply empathetic people there are in the world.

Q: Has anyone served as a mentor to you at W&L?

Absolutely! I know I would not have gotten as involved at W&L or grown as much as a person if not for the fantastic people I have met here. I consider most every professor I have had in this institution a mentor because of their passion for their positions as teachers, their patience and care for their students, and their humility toward their vast knowledge and capability. Some standout professors that I have had the pleasure of meeting include professors Paul Cabe and Helen I’Anson in the Biology Department, professors Andrea Lepage and George Bent in the Art History Department, and Professor Kevin Beanland in the Mathematics Department. There have also been many mentors that I have met outside of the classroom, like Kim Hodge and Nicole Poulin in the Office of Sustainability and Kelsey Goodwin in Student Affairs, all of whom have helped me more than they know. Lastly, I know they will never accept it, but several of my peers have been absolutely brilliant mentors in their own right, like Mikah Holcomb ’21, Alankrit Shatadal ’21, Tara Kakkaramadam ’22, Alexander Caines ’21, and Freddie Marx ’21. Thank you all, you wonderful, merciful, beautiful people.

Q: What do you get there?
Drunken noodles, spice level 10.

Q: What’s your favorite spot on campus?
You can sit on the rocks by the stream behind Wilson Hall and forget about life for a bit.

Q: What book or film do you recommend to everyone?
“WALL-E,” because we cannot expect for change to come without putting in some effort of our own. And “UP,” because adventures are out there and daily life is full of adventures we may not notice at first.

Q: What do you miss most during COVID-19?
Hugging all my friends. 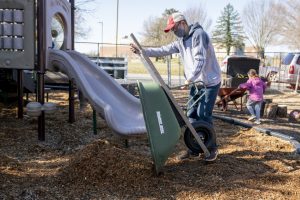