Gear Up Gonz Ferrero ’04 and Lenny Enkhbold ’17 blend their shared concern for the environment with a dash of business savvy to promote eco-friendly outdoor wear. 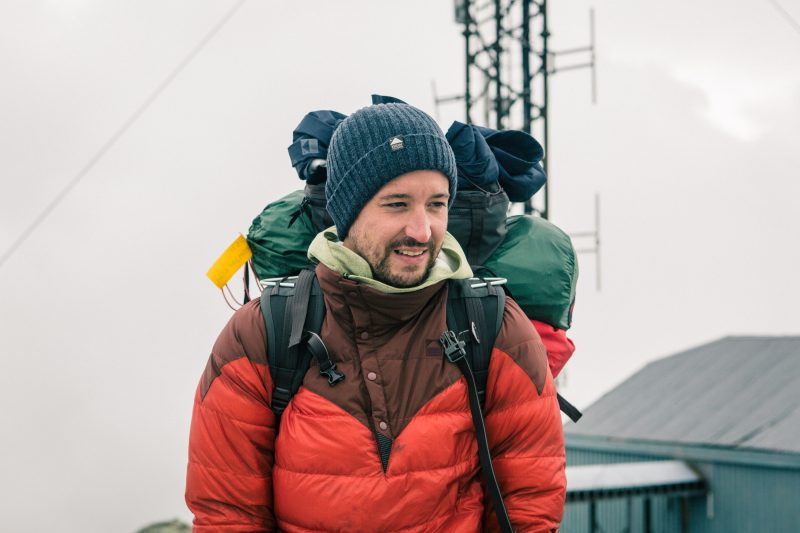 Gonz Ferrero ’04, avid mountaineer and splitboarder, advocates for sustainability through his mountaineering-equipment company.

In about half the pictures Gonz Ferrero ’04 posts on Instagram, the entire frame is filled with dazzling white, snow-covered peaks. It’s a good thing that the avid mountaineer and splitboarder loves winter, because he now lives in Åre, Sweden, where temperatures routinely drop to 22 degrees below zero. It’s also lucky that Ferrero’s wardrobe is stocked with staples from his company, Klättermusen, a Swedish business that sells what it touts as “the world’s most refined mountaineering equipment.”

As the new owner and chief executive officer, Ferrero set out to introduce Klättermusen to a “younger, more modern consumer” and to increase sales in Asia and Europe. But he has no intention of changing Klättermusen’s longtime mission: producing the highest-quality outdoor clothing and backpacks, capable of withstanding the world’s harshest climates, with the smallest possible impact on the natural world. It’s a philosophy that Ferrero says is even more essential today — in a world where dead whales wash up on shore after consuming pounds of the plastic trash that’s entered the ocean — than when Klättermusen first launched.

“I think there are massive opportunities for a brand like ours to be specialized, to be niche, and still do things slowly and carefully; to find the right message and right way to package that to attract a global customer; to experience the outdoors the same way we are able to do in Lexington or Sweden,” explains Ferrero, who majored in business administration at W&L.

From the day Ferrero bought Klättermusen, he knew he would be partnering with Washington and Lee one way or another. “It’s a special place for me.”

In March 2017, Ferrero contacted James Dick, W&L’s director of outdoor education, asking for advice on introducing Klättermusen gear to members of the Outing Club. Through that correspondence, Ferrero met Lenny Enkhbold ’17, a member of the Outing Club Key Staff. They felt an instant connection.

“He was probably the most energetic and passionate person I’d spoken to in a long time,” Ferrero says of Enkhbold. “Full of energy and full of great ideas about what he wanted to do. He was just about to graduate. He was a computer science major, and he had one thing clear in his mind: He didn’t want to go into computer science. He wanted to work in the outdoors.” 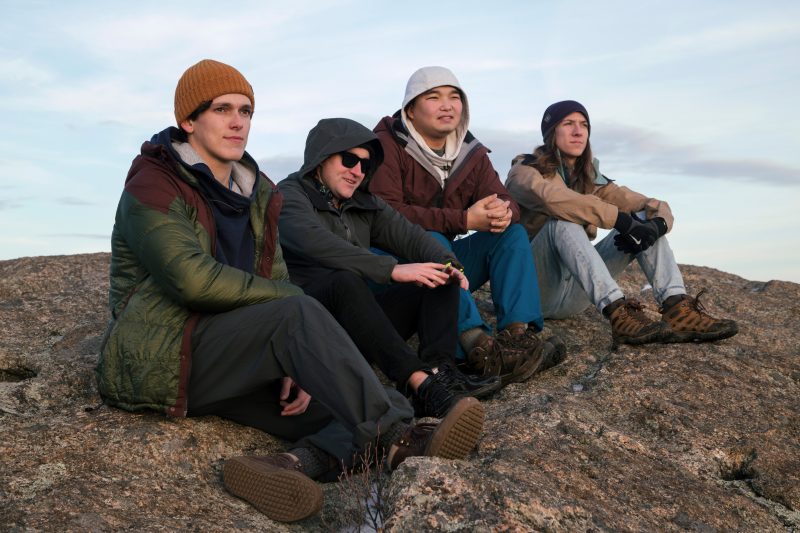 Ferrero came to the United States for business a few days after Enkhbold’s graduation. The pair met in Utah for a weekend camping trip at the Little Grand Canyon. “We saw some buffalo,” Enkhbold says. “We saw some bighorn sheep. We saw some canyons.”

They also decided to work together. Enkhbold became the U.S. engagement coordinator for Klättermusen. His job was to work on product seeding, getting influential people in the outdoors to wear the company’s clothing and carry its backpacks.

“Really go-push-the-word-of-mouth angle,” Enkhbold says. “We think that if we make the proper clothing, proper gear, then the right people will find us.”

Two Peas in a Pod

It only makes sense that Ferrero and Enkhbold became fast friends, for they have many things in common. Both were born outside the United States. Ferrero’s family moved from Spain to Buenos Aires, Argentina, when he was 10 years old. Enkhbold was born in Mongolia, where as a child he rode on horseback to help his grandfather tend sheep and goats. His family moved to Roanoke, Virginia, when he was 7.

As W&L students, both men were lured by the siren song of the surrounding Shenandoah Valley. Getting out into nature wasn’t a new thing for Enkhbold. “I’m shamanist, you know,” he says. “The outdoors have always been very precious for me.”

Enkhbold, who also majored in German, did discover at W&L that he liked getting other people hooked on the outdoors. Through the Outing Club, he organized everything from horseback riding to hang-gliding trips for other students. His first year at W&L, he participated in the pre-orientation Appalachian Adventure trip, where dozens of new students spend a week navigating the famed trail. For the next three years, he led the trip. 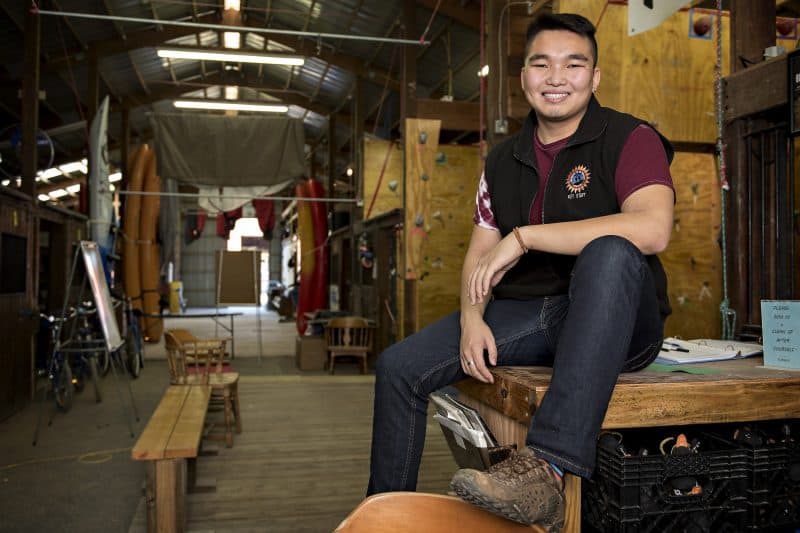 Lenny Enkhbold ’17 in the Outing Club barn at W&L.

During his junior year, Enkhbold was one of 13 students selected for the Merrell College Ambassadors program, where he worked with representatives from Merrell, an outdoor footwear and clothing company, to get his fellow students outdoors. The next year, he was named an Outdoor Nation/National Park Service Ambassador.

Little by little, Enkhbold says, he grew into a micro-influencer. While that term usually means someone with a dedicated following on social media, he prefers to do his influencing face-to-face. “I didn’t have the largest following or anything like that, but I was constantly leading trips,” he says. “I was getting people outdoors and sharing this passion I have.”

Ferrero, unlike Enkhbold, had always lived in cities. He came to W&L with zero experience in outdoor recreation. Once in Lexington, though, he quickly discovered he loved hiking, rafting and camping. “You get to college and you start trying things out,” Ferrero says. “You come with all your senses open, right? Everything is interesting. Everything is exciting.”

Ferrero, like a lot of recent college graduates, found it hard to make time for his outdoor pursuits once he began adulting. He moved to London, where he worked in finance, and later launched technology and entertainment start-ups before earning his M.B.A. in business administration from INSEAD. After that, Ferrero found himself in Shanghai, China, where he worked as the chief financial officer and venture partner for Designed for Revolution (DFR Asia), a media and entertainment group specializing in Asian markets.

“It’s a fantastic party for everyone to see and to live at some stage in their lives,” Ferrero says of China. “But it’s also hugely overwhelming. It’s never stopping. Always running. Always racing. Seven days a week. Twenty-four hours a day.”

In 2014, Ferrero decided he’d had enough. He missed being outdoors. Hand-in-hand with Merve Arslan, the woman who would become his wife, he took off. “We traveled for a year around the world as kind of a big trip to reconnect with ourselves,” he says. “We had a fun time hiking and climbing in Nepal. We were skiing in the Alps. We were running around deserts in Bolivia.”

For Nepal, Ferrero had purchased an inexpensive down coat. Once he got there, he discovered it didn’t keep him adequately warm or dry. “Then you realize, this isn’t just a piece of clothing. It’s equipment, right? It’s gear.”

After that, Ferrero became “very nerdy” about his outfitting on outdoor adventures. As he researched the outdoor clothing industry, he also worried about the impact manufacturing had on the environment. “All these products, all this gear, are supposed to get you close to nature and more connected with the outdoors, but they’re all using very poor practices of production and poor fabrics.”

Through his studies, Ferrero learned about Klättermusen and its dedication to making the highest-quality gear with a minimum impact on the planet. He contacted Peter Askulv, the biologist and climber who founded the company in 1975, hoping to talk him into working together. Instead, he found that Askulv was ready to retire and sell the company. “I said, ‘Great! I will take it off your hands.’ ” Ferrero purchased the business, with help from investors, in 2015. 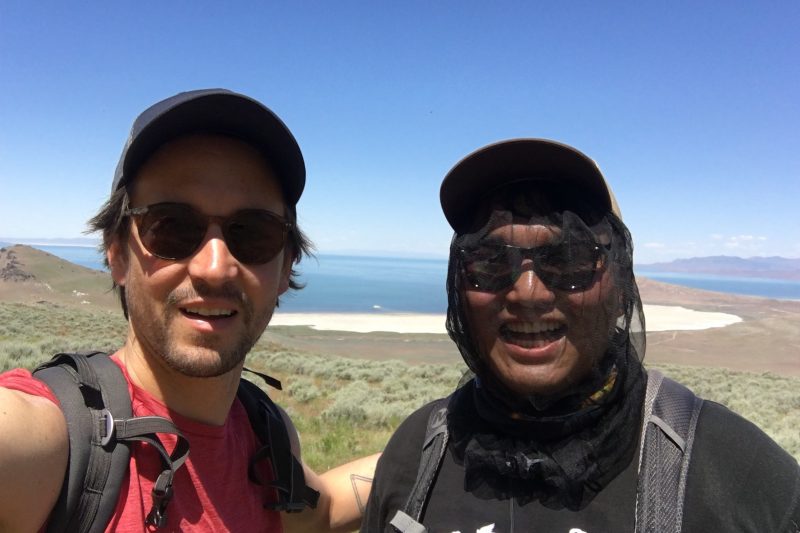 Enkhbold never tires of talking to other outdoor enthusiasts about Klättermusen gear. “It’s nice to be able to introduce something that is kind of like a secret to people within the industry here,” he says. At the same time, he discovered that being the only U.S. employee of Klättermusen could get a little lonely. Working remotely was not a good fit for his gregarious personality. Reluctantly, he has begun hunting for another full-time job, possibly in the outdoors industry. Even so, he plans to continue spreading the word about the Klättermusen brand. “I’m trying to maintain the relationships I’ve built,” Enkhbold says. “The long-term goal is to bring the company into America. Both Gonz and I are keen on that.”

Both men feel their friendship is the lifelong variety. “Lenny for me is a very special person,” Ferrero says. “He does things from the heart and always coming from the right place. Sometimes you just click with people. He’s that case.”

A 20-minute phone conversation with Ferrero, Enkhbold says, never fails to brighten up his day. “I feel amazing afterward,” he says. “It’s just nice to have some direction and some guidance.