‘Getting Up, Showing Up and Never Giving Up’ Mimi Miller '21 interviews Jennifer Smyrnos '12L about practicing immigration law, a career that was inspired in part by her family heritage.

Editor’s note: In this series, “Living the Shepherd Dream,” current students in the Shepherd Program for the Interdisciplinary Study of Poverty and Human Capability at Washington and Lee interview alumni of the program who are working in a field that interests both. Look for additional installments in this series on The Columns. 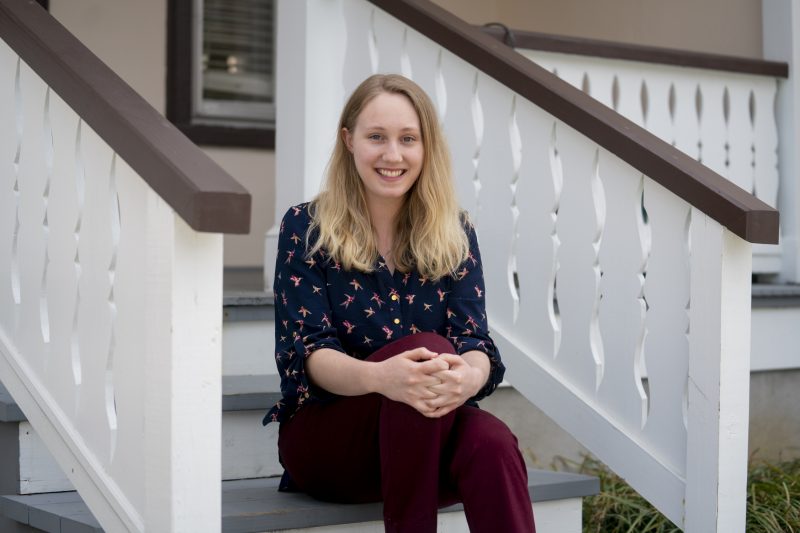 “Through the [Immigrant Rights Clinic], I witnessed how powerful the law is and how it can change a person’s life so dramatically—especially when you’re working towards something as fundamental as a person’s legal status in a country.”
~ Jennifer Smyrnos

Mimi Miller ’21 is a sophomore from Wichita, Kansas, who is majoring in global history with a minor in Latin American and Caribbean studies. She is interested in immigration law and advocacy. During Fall Term, she worked at the Immigration Rights Clinic at the W&L law school in order to become more familiar to how attorneys advocate for their clients under and throughout the U.S. Citizenship and Immigration Services (USCIS) systems. She traveled to Costa Rica last summer to develop linguistic skills in Spanish and will be in Argentina this summer to continue improving those skills while working as an English teaching assistant.

Mimi recently interviewed Jennifer Smyrnos ’12L to learn more about her graduate and post-graduate careers in immigration law. Before starting her own law firm in Roanoke, Virginia, Smyrnos worked for law firms that specialize in immigration law. 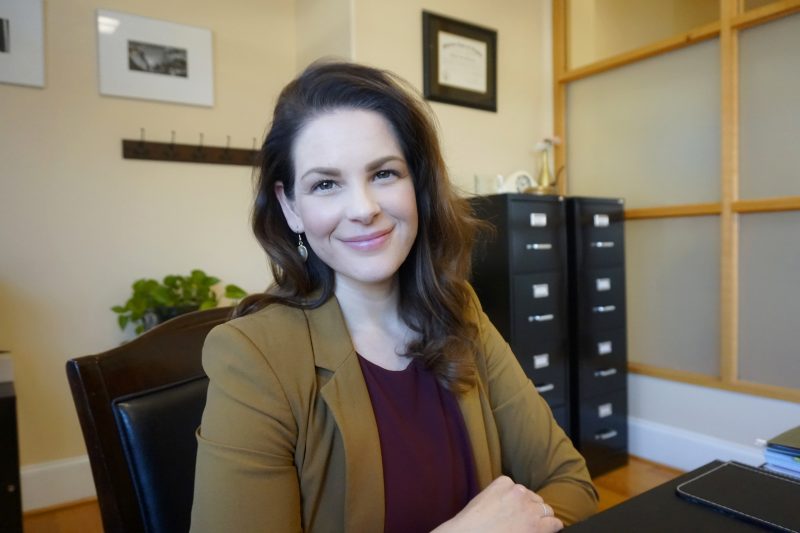 Q: What drew you to immigration law and advocacy?

I’d say there are probably two or three key areas in my life that helped draw me to immigration law. Beginning with my ancestry, I come from a family with recent immigrant heritage. My mother was born in the capital city in El Salvador and emigrated to the United States in the 1960s when she was 10 years old, with my grandma and her siblings (nearly all 12 brothers and sisters). On my dad’s side, his father was a Greek immigrant whose family passed through Ellis Island during its heyday and saw, as was custom, his heritage Americanized with a new last name; he left Greece with the surname “Smyrnogiannis” to live in the United States forever after as a “Smyrnos.” My family’s experience of living life in America as immigrants and the children of immigrants has had a deep impact on the work I do now. Their stories, sacrifice and grit help me to connect with my clients and families who are just now in the beginning stages of adjusting to American culture and setting down roots in our country.

I also wouldn’t be the practitioner I am today if it wasn’t for my dad, George Smyrnos. My dad always held a passion for law enforcement which led to a lifelong career as a public prosecutor. For the last 20 years of his career, he served the County of Sacramento as an assistant district attorney, helping to combat narcotics trafficking, utilizing wiretap procedures under the Fourth Amendment, and pursuing cases against federal inmates. My dad made a point to welcome me into the District Attorney’s Office (and the courtroom, with the judge’s permission) so I could learn from an early age about his work in the legal system.

The moment I was particularly drawn to immigration law happened when I was a 3L student at Washington and Lee University School of Law. Up until that point, the W&L curriculum exposed us students to a variety of essential practice areas, including constitutional interpretation, criminal defense, contracts review, administrative procedure and family law, to encourage us to be familiar with the basics of the legal system and what area may be of unique interest. For me, my interest piqued when I joined the Immigrant Rights Clinic in my third year. The Immigrant Rights Clinic formed part of W&L’s invaluable and radical approach to a legal education which focused on providing its law students a real-world introduction to the practice of law. The clinic’s specific goal was to expose law students to legal experiences such as representing a child before the immigration courts, arguing for bond on behalf of a detained immigrant, or seeking humanitarian relief for a victim of domestic violence. Through the clinic, I witnessed how powerful the law is and how it can change a person’s life so dramatically—especially when you’re working towards something as fundamental as a person’s legal status in a country. Having such a moment of realization at W&L Law as a student cemented my drive to pursue immigration law after graduation. Since graduation, immigration remains my primary focus and is one of the most challenging and rewarding areas of law to practice.

Q: How was the process of starting your firm? What were some of the frustrations and enjoyments?

I launched my private immigration firm in February 2015. The practice started off small—we had a single room with a desk and a few chairs opposite each other for me and the clients. Even with these humble beginnings, it was still a busy time. As a solo lawyer, you practice law but also wear several other hats to keep your business running, such as being your own accountant, IT department, office manager, marketing and outreach coordinator, etc. The first year of practice was also an uncertain time; my client base was still developing, my reputation still being established, and the future unknown. But thankfully, with time, my work within the community led to the growth of the firm. I scaled up operations at first by outsourcing different areas to virtual assistants—a bilingual receptionist to help answer calls and take messages, a paralegal who worked from home in Brooklyn, and a local translator who helped with case documents.

Four years later, I’ve consolidated our legal team to work in our downtown office in Roanoke. We now have two outstanding paralegals and a brilliant legal receptionist on site to help manage our firm’s caseload. I like to think we are a small but mighty team because on any given day, we have upwards of 300 immigration cases pending. As is normal for the immigration law field, our cases on average can take anywhere from several months to more than three years to complete. Even with so many matters to represent and track, we manage to balance our case work with a healthy dose of office camaraderie and humor (i.e., daily lunches around the conference table and lots of internet meme jokes). Being able to work alongside a team who shares a passion for the work and clientele is easily one of the most rewarding aspect of my career. Having that kind of office “family” closeness and legal support team is priceless and has helped our firm better serve the legal needs of our local and international community.

Q: What are some of the tasks or cases you work on daily?

Our firm has a fairly diversified practice. If you were looking at our case types as a pie chart, I’d say one-third of the pie relates to representing individuals and families in removal proceedings before the immigration courts, another third relates to working with clients locally and internationally in family-based immigration cases, and the last third consists of naturalization petitions, work authorization renewals, and humanitarian-based programs for legal status.

To get through these cases, our office follows a steady routine. We have set weekly consultation schedules, reserve Wednesdays as “case work”-only days, and make a point to collaborate often and daily as new developments arise. For the most part, you can find me at my desk on any given day. The nature of immigration law involves a lot of paperwork, so I find that my office hours revolve around staying up-to-date on immigration policy changes, directing case strategies, and finalizing our case submissions.

Q: If there was one change that you could make to immigration policy, what would it be?

I personally believe it would be helpful to see immigration petitions reviewed and processed more quickly. Our immigration agencies, the U.S. Citizenship and Immigration Services for stateside cases and the National Visa Center for overseas applications, have undergone tremendous change in the past few years and have had to contend with a high number of cases being filed annually. The citizenship application backlog alone is over 700,000. Numbers like these have real-world implications for those of us who work with USCIS and the NVC.

For example, in stateside family cases, our clients historically have been granted work authorization in three months’ time. Work authorization in turn allows them to be eligible for a social security number and a Virginia driver’s license. However, in the past two years, our clients and families are now waiting twice, or sometimes three times, as long for that precious approval notice. The delay in receiving something as fundamental as a work card can lead to gaps in employment, uncertainty in work prospects, and overall greater anxiety given that we’re also operating in an era when hostility against immigrants is being formalized into sweeping policy and law changes.

Q: How did the government shutdown affect your clients or your work?

During the federal government shutdown in December and January 2019, I saw multiple immigration court hearings cancelled. For many of our clients, those cancelled hearings represent a delay in their case when we were often prepared to move forward on our relief against removal. For the few cases that have been rescheduled so far, our next hearing dates are anywhere from three to several months out. Thankfully, our cases in other areas continued to move forward as business asusual—for example, the agency USCIS’s fiscal budget is mainly based on the immigration filing fees they receive so their operations were not as dramatically affected as the immigration courts.

Q: What advice would you give to someone who is considering law school?

In general, when it comes to pursuing grad school, I found a gap year to be helpful. In my case, I took two years from the time I graduated college at UC Davis until I enrolled at W&L Law to help reflect on whether attending law school was a good decision for me and how I would go about funding my graduate education. During these two years in Davis, California, I bused tables at a local restaurant at night and worked for the university during the day. Working for UC Davis also had a major impact on my life—if I could add a third area of influence for my work as an immigration lawyer now, it would be the UC Davis Vice Provost Office for International Affairs and the California Sea Grant. I had the good fortune of working for these departments for several months which exposed me to how colleges build and maintain good relations with their sister universities around the world. The work of these offices centered around welcoming delegations from other countries, organizing academic conferences at home and abroad, and otherwise promoting international dialogue to help further UC Davis’ mission to make an informed impact in its community.

Practically speaking, working full-time while living on my own in Davis also provided a good introduction to “adulting” in those years. That time represented one of those “you learn to swim because you’re in deep waters” situations because I had to manage a job to support myself, balance a budget, keep my apartment stocked and cleaned, and make time for friends and family. The habits I formed in Davis helped me get the most out of the world-class legal education at W&L Law in Lexington. I viewed law school through the lens of working a full-time position—where each day focused on getting up, showing up and never giving up. Following that mantra helped make my time at W&L a precious one that has enabled me to live the career of my dreams.