Science, Society and the Arts Presents: Yolanda Yang ‘18 Meet Yolanda Yang ‘18, who has traveled to China and back to discover the true purpose of cinematic censorship. Yang and study partner Savannah Kimble ’18 conducted research on this project in 2017 under the auspices of a grant from the Endeavor Foundation.

“SSA is a unique class for all of us to learn some interesting knowledge that we haven’t had a chance to learn before.” 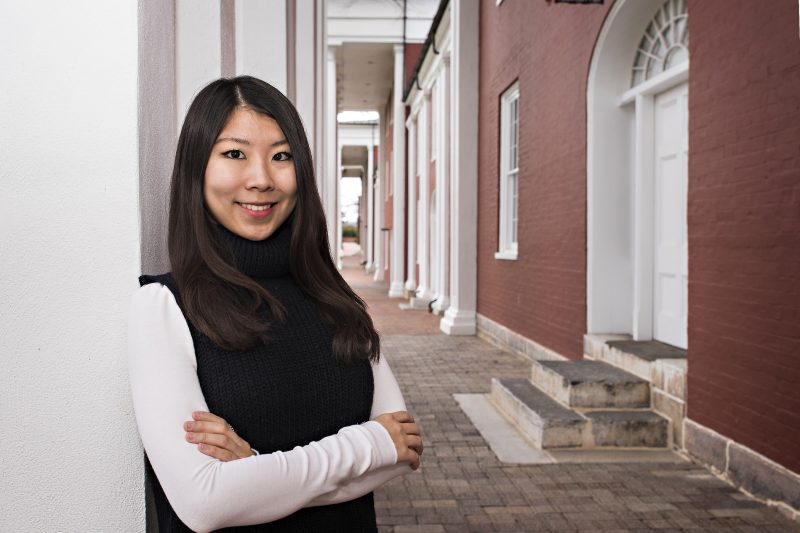 Science, Society, and the Arts is a multi-disciplinary conference where Washington and Lee undergraduates and law students present their academic achievements before an audience of their peers and the faculty. Through the conference, students, faculty and staff alike have the opportunity to explore new topics and discuss new ideas. Conference participants share their work via oral presentations, traditional academic conference-style panels, poster sessions, artistic shows, creative performances, or various other methods.

Even though SSA has ended, you can still enjoy these stories about the many interesting projects and performances being presented by the students.

Q: Can you describe your project?

By comparing movies shown in Chinese cinemas and their original versions shown in the U.S., we have proven that several films are censored by the Chinese authorized institution, SARFT. We summarized main types of censorship and tried to discover the possible reasons behind them. Besides, we also interviewed local Chinese people and professors in Beijing, collecting their views of the movie censorship policies; thus, by observing how the policies have influenced people’s lives currently we could possibly predict the changes of the policies in the future.

Q: What about the topic made you explore it?

During our freshman year, Savannah Kimble ’18 and I went to see “Kingsman: The Secret Service” at the Lexington theater. Some time later, I chatted with one of my friends back in China, and he told me that he watched the Kingsman movie in a Chinese theater, but the famous “church massacre” scene was cut (almost four minutes long). I brought it up to Savannah, and both of us thought that this was an interesting point of cultural difference, and months later that conversation inspired us to a good project that combines many of our interests (politics, literature, psychology, culture and film).

Q: What was the most interesting thing you have learned while working on this project?

I found it was very interesting that so many Chinese elements were thrown in Hollywood movies. It’s fascinating to think about Chinese economic development leading Hollywood to cater to Chinese audiences. It’s also interesting for me to see how foreign film directors choose to depict Chinese culture in their works

We planned to study the political reason behind the censorship, but in reality, we found that the movies we chose and had access to limited our ability to look closely at political aspects. What’s more, some Chinese versions of some movies we initially expected to be censored — such as “Titanic” and “Transformers” — were not censored at all. As a result, our findings were less centered around censorship than we expected. However, even the fact that the government does not censor as much as was expected provides interesting insight into political and cultural changes due to globalization.

Q. What insight — or insights — did you gain during the research period?

We proved that film clipping is common; we learned about the shift in Chinese cultural values over the years and censors becoming more lenient; we found the growth of Chinese economy reflected on global film industry; and we realized that film industry has grown into an important business in China by a fast speed.

More details will be provided at my presentation!

Q: What is your favorite part of creating, researching, or developing this project?

Personally, it was very exciting to introduce Savannah to my home and my homeland. It was the first time I brought my American friend back home, and it gave me a chance to consider my cultural identity again with a more comprehensive and mature view. I am so glad that I could have this special experience with my very best friend.

Q: What does SSA mean to you?

It provides me a broad platform to present my project and findings to a larger audience, and it gives me the chance to encounter and communicate with people who share similar interests and ideas with me. I am looking forward to showing my project and sharing my culture with W&L community.

Q. Why is SSA — considering science, society, and arts together — important to this campus?

SSA is a precious opportunity for the W&L community members to interact and share with one another. I think it’s especially eye-opening and inspiring to see our peers’ work. In some respects, SSA is a unique class for all of us to learn some interesting knowledge that we haven’t had a chance to learn before.

A little more about Yolanda

Off-campus activities/involvement:
– Volunteering as English teacher in Zacatecas, Mexico
– Interning at the Lugar Center during Washington Term
– Studying abroad through DIS in Copenhagen

Why did you choose your major?
I always wanted to study politics so I started taking politics classes right away and loved all the classes I have taken. During sophomore year, I took Dr. Woozicka’s introduction to social psychology, and fell in love with the new world I found in psychology. I decided to be a politics and psychology double major because I love both subjects.

What professor has inspired you?
The fair answer would be every professor I’ve ever had, because all W&L professors are so knowledgeable and approachable. Specifically, my advisor Professor Rebecca Harris inspires me a lot. I took American Government class with her my freshman year. Many office hour talks ignited my enthusiasm for politics. Professor Harris’s open-mindedness has always encouraged me to challenge myself further.

What’s your personal motto?
Be yourself, everyone else has already been taken.

What’s your favorite song right now?
“Final Song” by MØ. Or give me Taylor Swift, anytime.

Best place to eat in Lexington? What do you order?
Haywood’s and Taps. I get shrimp and grits at Haywood’s and the burger and fries from Taps.

What do you wish you’d known before you came to campus?
First, you could always try a little harder than “your best”, because otherwise you would never know you could do so much! Second, it does get cold here! Virginia is way more southern politically than geographically.

Favorite W&L memory:
Walking/jogging at back campus around sunset time; or reading on the colonnade

Favorite class:
Washington Term. It was full of challenge with both class and an internship going on at the same time, but it was full of fun. I get to meet some amazing people at my internship and had a great time bonding with my friends and Professor Connelly! D.C. is also such an awesome city, and Washington Term made me want to live there in the future.

Favorite campus landmark:
The view of Lee Chapel from the Colonnade

What’s something people wouldn’t guess about you?
I love writing in Chinese and I’ve published some writings. I would have been a Chinese literature major if I didn’t come to the U.S.! But now I have already started to forget my Chinese!

Why did you choose W&L?
It feels like home to me and I couldn’t see myself ending up anywhere else. I knew I would be both happy and successful here. Also, the General really is one of the coolest mascots.