Each year, undergraduate students get the chance to present business ideas in front of a large audience of students, faculty, staff, and alumni. They also defend their ideas and answer questions, reaching out to audience members who may act as potential investors.

This year’s competition took place on September 28 and began the last day of the Entrepreneurship Summit. Eight applicants were chosen to present their pitches, focusing on the product or service itself, their target market, potential revenue generation, and competitive advantage.

After some intricate decision-making, the winners were announced. The topics of the three winning pitches revolved around practicality, sustainability, and nutrition. All of them exhibited stellar vision and originality.

First place went to Harry Shephard ’20 and Luke Alli ’22 for their idea of offering practical storage solutions – a business that is already up and running. “While it was daunting to launch a business at first, the lessons we have learned will prove to be incredibly useful in the workforce,” Shephard said. He first envisioned the idea of creating Valet Summer Storage as a solution for storing his belongings over the summer. The two young entrepreneurs wish to expand their idea and service other rural colleges in the area.

Ayer’s project aims to revolutionize home gardening by making it more accessible and sustainable. “The Entrepreneurship Summit gave my idea great exposure and I received immediate feedback and advice from alumni who helped move my idea forward,” Ayer said.

Kylie described her dairy-free lifestyle website as “the one-stop-shop for all things dairy-free, from recipes to articles, merchandise and education.” She hopes that it will soon grow both business-to-business and business-to-consumer.

The winners earned a total of $1,750 in cash prizes and invaluable alumni input. 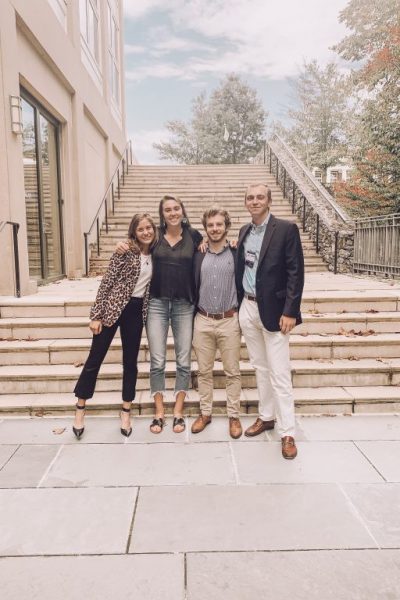 Valet Summer Storage, LLC is an on-going business that provides ‘by the item’ storage and futon rentals for undergraduate students at W&L. Pickup and drop off of items are offered directly to a dorm room, which means the clients save time, money and the hassle of lugging heavy boxes to and from their unit. The storage is also air-conditioned so that the stored items are not subject to hear, moisture, bugs, and other nature’s elements. More information as well as a general pricing array of the offered services can be found on their website ValetSummerStorage.com.

Aqua Garden is a business that will ultimately sell kits containing the materials to build a small-scale aquaponic garden: one that both cultivates plants and integrates fish farming activities through the usage of hydroponic technology. In the midst of the “eat local” movement, Aqua Garden will give individuals the ability to grow vegetables in their back yard or porch without having to maintain a traditional garden. Aquaponic gardens are more environmentally friendly as well as less time and energy-consuming. Owners of an aquaponic garden don’t have to worry about weeds, watering or even dirt.

TheDairyQueen.com is a dairy-free lifestyle website intended to make dairy-free living accessible and affordable. It is also an e-commerce shop with clever merchandise, a recipe hub and a blog featuring interviews with nutritionists and more. It is quickly growing and seeking expansion to a tangible product, book series, merchandise hub and mobile application to assist with eliminating diets, doctors‚ and sharing the recommended first steps in removing dairy from one’s lifestyle.