Washington and Lee students won Mark of Excellence Awards in three categories in the Society of Professional Journalists’ Region 2 competition.

Hannah Denham, a junior from Spanish Fort, Alabama, took first place in the In-Depth Reporting category for her work in exposing flaws in Florida’s SunPass toll system while she was an intern at the Tampa Bay Times last summer.

Gus Cross, a senior from Shelbyville, Tennessee, won the Feature Writing prize for a story he wrote for The Roanoke Times about Humpback Bridge in Alleghany County, Virginia.

Eight W&L students took first place in Best Use of Multimedia for “W&L at a Crossroads: Direction of Diversity is Not Black & White.” The project was completed as part of a Winter Term 2018 journalism course, Multimedia Storytelling Design.

Elly Cosgrove, a senior from Wilmington, North Carolina, was a finalist in the Feature Writing category for a story she wrote during her internship at the Charlotte Business Journal about a nationwide shortage of truck drivers. She also was a finalist in the Television Sports Reporting category for her story for the Rockbridge Report about the growth of eSports on W&L’s campus.

Ellen Kanzinger, Maria Rachal and Faith Pinho, all 2018 graduates, were finalists in the Online In-Depth Reporting category for their journalism capstone project, “Field of Dreams: Young Farmers in Rockbridge.”

Region 2 is comprised of universities in Delaware, the District of Columbia, Maryland, North Carolina and Virginia.

Honorees received award certificates the weekend of April 6 at the Region 2 Conference in Ocean City, Maryland.

First-place winners move on to compete at the national level with other regional MOE winners from the SPJ’s 12 regions. The winners will be announced in the fall. 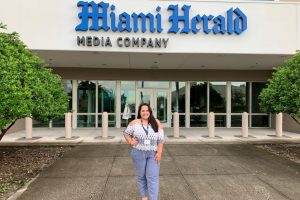