The following interview with Linda Hooks, professor of economics and head of the Washington and Lee University Economics Department, appeared in the March 25, 2020, edition of The News-Gazette and is reprinted here by permission.

‘I Would Advise For Speed’

Direct payments to nearly everyone. Quick unemployment checks for those thrown out of work. Billions of dollars to bail out businesses

These are among the measures that may be in a $2 trillion stimulus package expected to emerge from Congress this week to help the country combat the ill economic effects of the COVID-19 outbreak. Various proposals have been tossed around, touted, discarded, debated and argued over the past several days.

Congress earlier passed, and the president signed into law, two pieces of legislation in response to the coronavirus outbreak. An $8.3 billion bill that dealt mostly with the initial health care response was enacted March 6. The Families First Coronavirus Response Act, estimated to cost $100 billion, provided various types of assistance for those directly affected by the pandemic. It was signed into law March 18.

The third, all-encompassing, and by far the most costly, federal measure was continuing to be haggled over in Congress as this newspaper went to press Tuesday afternoon.

To try to make sense of the federal response to this crisis and learn more about what might emerge from Congress, we consulted Dr. Linda Hooks, a professor of economics at Washington and Lee University. She agreed to offer her insights by participating in a question-and-answer session via email. Here are our questions and her answers:

N-G: The Federal Reserve announced Monday it would use bond purchases to help the U.S. economy, including buying Treasurys and mortgage-backed securities “in the amounts needed” to keep markets functioning. What are your thoughts on this strategy?

LH: The purchase of bonds by the Federal Reserve is a classic strategy to assist markets in a crisis. It is a strategy that has been used successfully for over a century by central banks around the world. Financial markets always include many assets that are illiquid. In a crisis, the illiquidity becomes a major problem. The Fed’s moves increase the liquidity available in the market and should ease the situation. The Federal Reserve acts as the “lender of last resort” in financial crises by purchasing bonds and, in turn, providing cash to market participants to increase their liquidity positions.

N-G: What do you think of the proposal to send checks (i.e, $1,200 for adults, $500 for children) to everyone? Explain why this is or isn’t a good idea. What about a proposal to get unemployment checks out quickly to those who suddenly find themselves out of work – waiving usual requirements and guaranteeing payments for a certain number of weeks or months (or until the crisis passes)?

LH: Congressional decisions to send checks to most all taxpayers or to speed up unemployment claims are also solid choices. To help an economy in crisis, the government really has just two policy choices, monetary policy determined by the Federal Reserve, and fiscal policy, determined by Congress. So this is the other policy tool available. Either policy would give consumers more net income, which would likely increase spending at least a little, and that would help the economy to grow.

Economists think of unemployment claims as an “automatic stabilizer” in the economy and the policy is working just as intended. That is, when people lose jobs, they lose income, of course, and governmentprovided payments to these people automatically replace some of their income. This allows them to continue spending somewhat and means the economy automatically contracts a little less than without the payments.

N-G: Comment on various plans to provide financial assistance to different segments of the economy – airline industry, hotels/ tourism, small businesses in general, health-care providers/hospitals? One of the holdups to the stimulus legislation being passed in the Senate is Democrats’ concerns that stimulus funds have provisions to protect workers and prevent businesses from not using the money as it was intended.

LH: I believe this reluctance comes from the experiences during the 2008 financial crisis, in which some were concerned that certain industries and specific companies got assistance and yet they perhaps were not held accountable. It is very difficult in the midst of a crisis to determine who should be held accountable. Especially in the current situation, it is not clear that there were concerns internal to the businesses. Instead, the problem was external to businesses in that it involved a pandemic. In the world of financial markets, some economists argue that it would be reasonable to lend to all financial institutions in need, no matter what, because of their unique role in the economy in terms of the money supply and their financing of businesses.

N-G: Is it more important to get the legislation enacted quickly or to make sure they get all the details right? Could it be enacted and then revised as problems arise?

LH: If I were giving advice on whether to move quickly or not, I would advise for speed. The 2008 financial crisis became even deeper when Congress at first declined to pass legislation to address the situation. The crisis lessened somewhat after Congress acted.

N-G: Can you think of a strategy that hasn’t been proposed to deal with this economic crisis?

LH: I will say this: It is notable that, since World War II, the average length of a recession in the U.S. is less than one year (it is eleven months). The most recent recession after the 2008 crisis, perhaps the most serious since WWII, lasted 18 months. Policymakers have a history of choosing good policy to address recessions. The U.S. economy has a history of returning to growth. The U.S. economy is built on a solid foundation of good economic fundamentals. 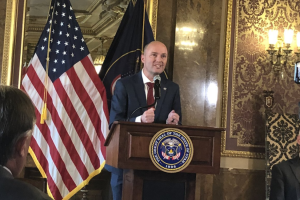