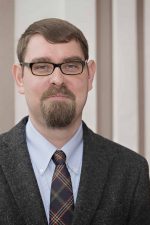 Barton Myers, Class of 1960 Professor of Ethics and History at Washington and Lee University, will be featured in a three-night miniseries about Ulysses S. Grant airing on the History channel beginning Monday, May 25 at 9 p.m.

According to the History channel, the miniseries “tells the unbelievable and quintessentially American story of a humble man who overcomes incredible obstacles, rises to the highest ranks of power and saves the nation not once, but twice. With a seamless blend of dramatic scenes, expert commentary and beautifully enhanced archival imagery, this three-part series uncovers the true legacy of the American hero who led our nation during its greatest test, the Civil War and Reconstruction.”

Myers’s commentary will be featured in all three episodes. The program’s trailers can be viewed using the links below.