Reliving Constitutional History in the Classroom Twelve students at W&L are creating their own version of the U.S. Constitution in Professor Lynn Uzzell’s politics course. 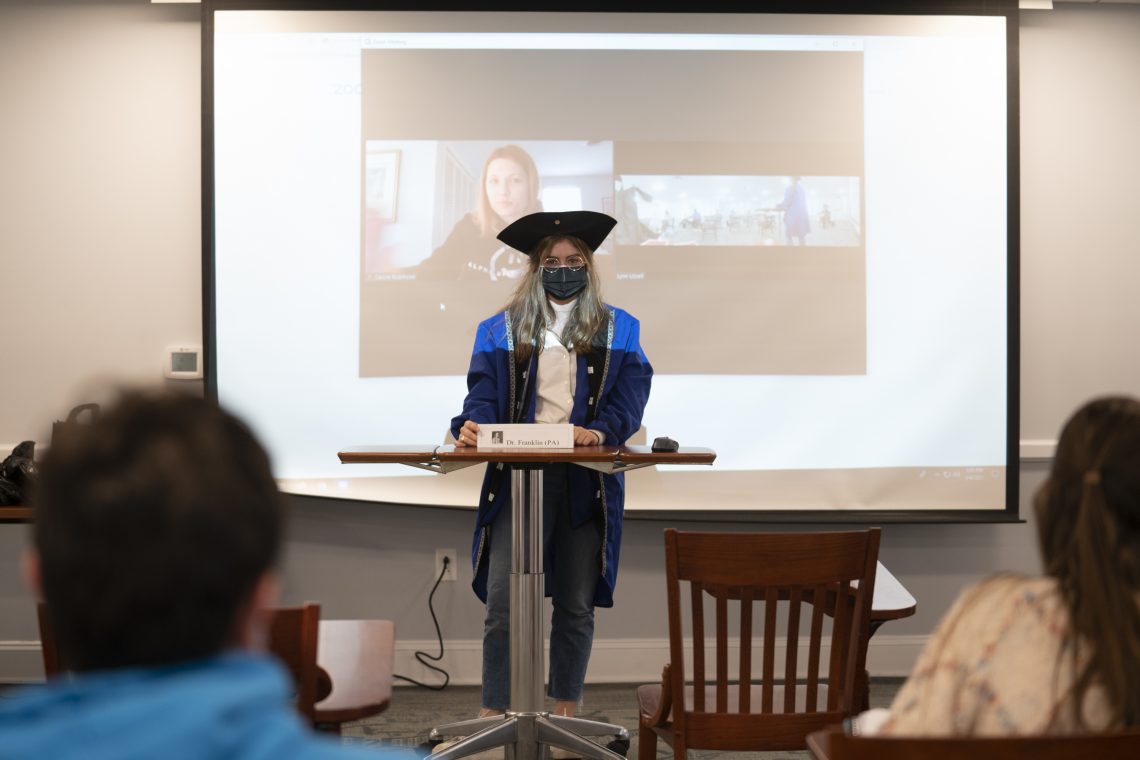 Lilly Gillespie ’22, who depicts Benjamin Franklin, calls herself “outgoing and occasionally theatrical.” These characteristics are why she believes she was cast as Franklin.

Twelve students at Washington and Lee University are creating their version of the Constitution of the United States. Creating the U.S. Constitution is a course taught by Lynn Uzzell, adjunct assistant professor of politics, and it’s the first of its kind taught on the W&L campus.

During the first half of Winter Term, students studied the historical debates of the Constitutional Convention of 1787 with a focus on the technical and practical arguments framing the structure of the young country’s federal government. Uzzell gamified her course, creating a convention reenactment of sorts, which began in earnest during the second half of the course.

In the game, each student performs the role of an influential figure from the historical event and the class assembles its own 1787 convention. Students work to construct a U.S. Constitution through persuasion, compromise, private deals and parliamentary procedure. By the end of the course, the students will vote on a Constitution of their own creation. The game is part of the “Reacting to the Past” series that originated at Barnard College and has now spread to more than 400 college campuses worldwide.

Students were not allowed to decide which historical figures they were going to play. Instead, at the beginning of the course, Uzzell had each student fill out an extensive questionnaire, which she used to make casting decisions for the game. 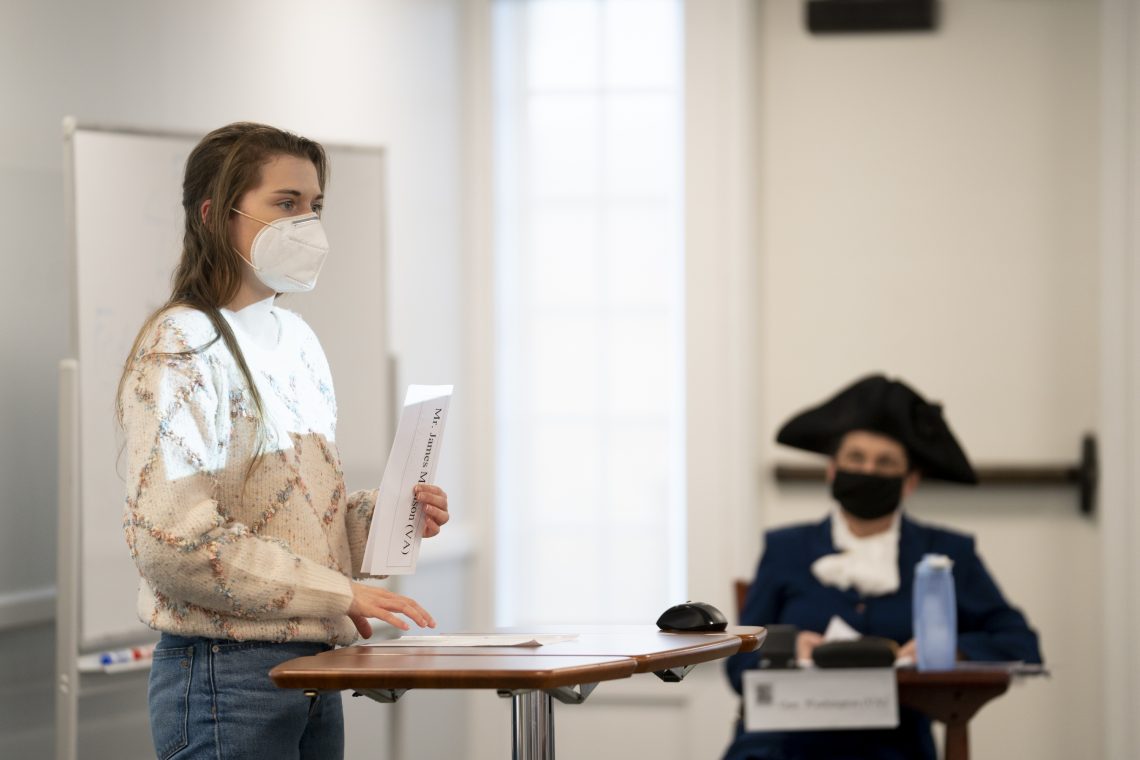 Katlin Cooper ’22 as James Madison presents in front of the Convention, as professor Lynn Uzzell, who portrays George Washington, watches.

Some of the characters in the game are composite characters. For example, Yansing is based on Robert Yates and John Lansing, both of New York. Blunwin is a composite of three characters: Abraham Baldwin, William Pierce and William Blount.

“The five men were all actual delegates, but their historical roles at the Convention were somewhat muted individually,” said Uzzell. “The game rolls them into composites to give them a bigger voice.”

Gillespie, who depicts Franklin, calls herself “outgoing and occasionally theatrical.” These characteristics are why she believes she was cast as Franklin.

“Franklin hosted the Constitutional Convention in Philadelphia, so he had to both participate and look after the fellow delegates,” Gillespie said. “He was known for delivering quips, giving advice and delegating committee activities. I want to think that my love of entertaining others, listening to others and sarcasm equips me to represent him.”

According to the game’s rules, Gillespie is required to attend class in a full costume, host a dinner party and perform an interactive science experiment.

“I was intimidated by the requirements at first, but now I love it,” she said. “Benjamin Franklin is known to have loved turkey, and I will prepare some sort of turkey dish, and I am looking at recipes so my preparation will be as authentic as practicable. For my science experiment, I found some simple ways to show how electricity conducts itself using a plastic water bottle, aluminum foil, water and PVC pipes.”

Hull plays Charles Pinckney, who was a South Carolina planter, politician and, at age 29, the fourth-youngest signer of the Constitution. Hull sees a lot of himself in his character.

“I believe my outgoing personality and willingness to engage in heated argumentation were key factors in being chosen to play my role,” said Hull. “Pinckney was a boisterous and hotheaded young man with political ambition, making him a passionate debater at the convention.”

While the students come into the course with their own political biases and ideals, the goal of the “game” is for students to vote based on how their character would. The finished Constitution may read somewhat different than the original, but according to Uzzell, it typically aligns with much of the actual document.

This course is not just about role-playing; students have to write extensively and deliver several speeches. By the end of the course, each student will compose roughly 12-15 pages of speeches. All of the documents are written in the tone and style of the time.

“I do not find it difficult to write speeches in the diction and style of the period’s language,” said Konlian, who portrays James Wilson. “Personally, Wilson’s style of writing is similar to my own. Moreover, writing in the diction of the era offers an opportunity to have fun with the debates.” 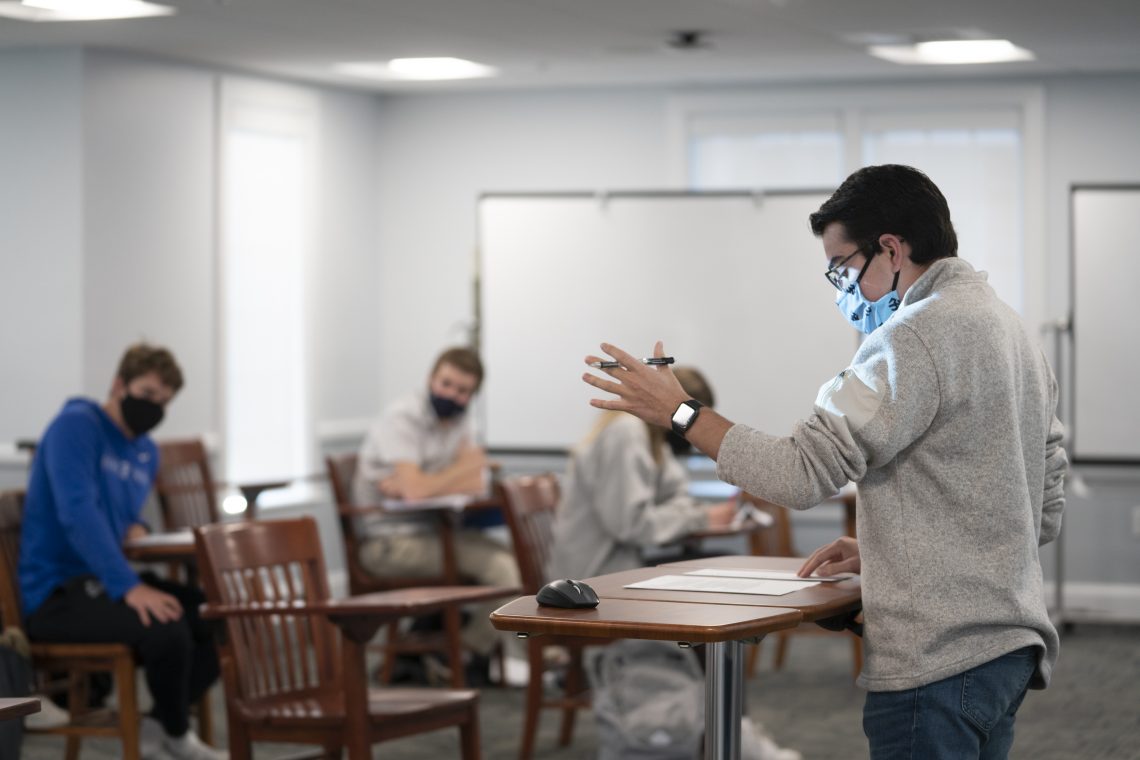 Brandon Konlian ’24 as James Wilson giving a speech to the Convention.

Not all of his classmates found the language so easy to grasp.

“Writing as an 18th-century statesman is an incredibly daunting task,” said Hull. “Although none of us ever speaks exactly as a Founding Father would, and some of us are better at doing so than others, we all tend to do our best to speak as if we were actually in 1787 Philadelphia.”

Students also find themselves coming away from each class learning more than they had even imagined. Cooper (James Madison) has immersed herself in the course and has been amazed to see why some of the decisions were made when writing the timeless document.

“Sometimes we can negatively judge the delegates’ decisions based on modern context, but when you evaluate the decisions made in comparison to the Articles of Confederation and the rationale behind those decisions, it shows the true brilliance of the Constitution and the minds who crafted the document,” she said.

With only a few more weeks to go, the students still have work to do to finish their Constitution, but they are confident that they will complete it. All of them believe courses like this prepare them for their future careers.

“I want to work as counsel for the White House or on Capitol Hill in my future career, so having a firm understanding of the Constitution, enhanced speaking skills and developed writing skills are definitely skills I am grateful to have acquired from this course,” said Cooper. 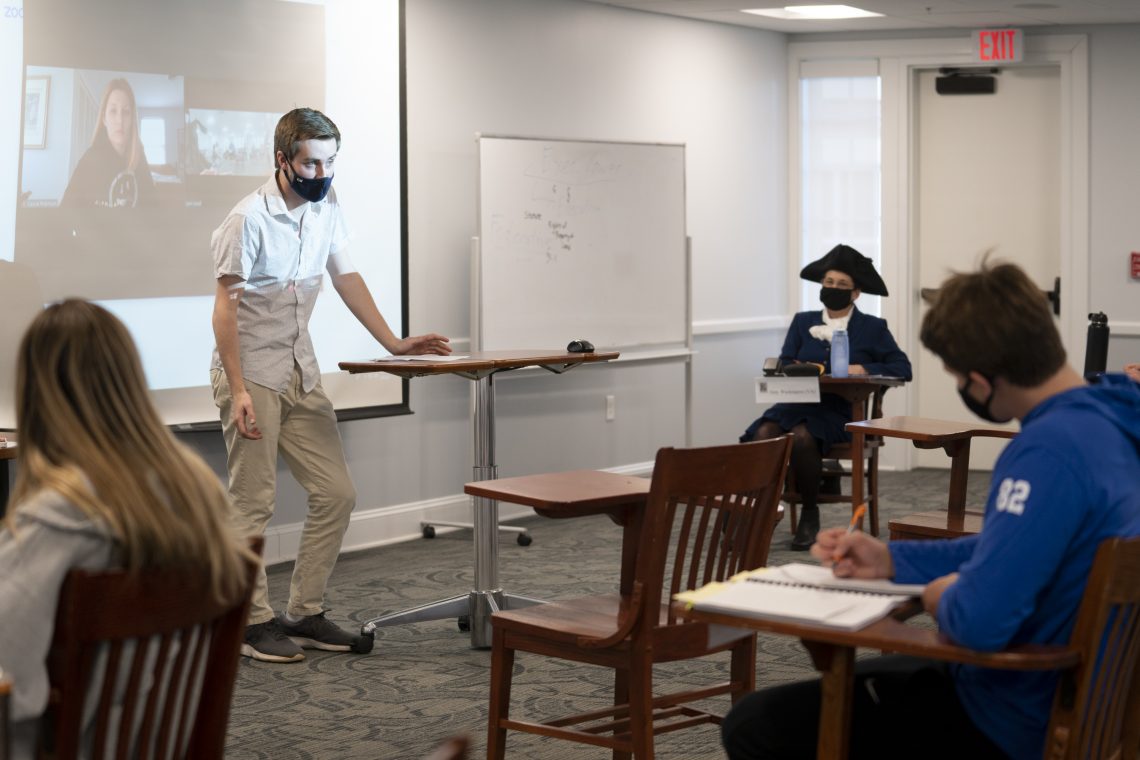 Dennis Hull ’22 plays Charles Pinckney, who was a South Carolina planter, politician and, at age 29, the fourth-youngest signer of the Constitution. 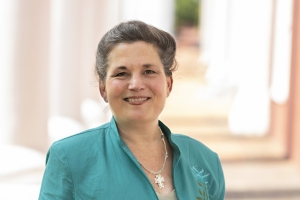